Élan Vital - The Creative Force that Drives Us

Life is a process of ever-expansion. It involves the unfoldment of new powers, driven by that inner impulse that philosophers call élan vital. Read on. 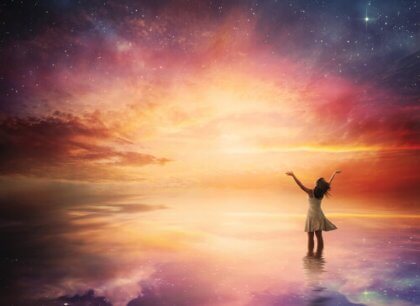 Life is a process of ever-expansion. It involves the unfoldment of new powers, driven by that inner impulse which the philosophers of Pragmatism call the élan vital. Whenever this impulse has its way, there’s an emotion of joy. Whenever it’s balked, there’s one of distress. Thus, pleasure and pain are the guides of life.

Plus, the final goal is a condition of free and constantly accelerating growth, in which joy’s enduring. Whether that man will ever reach élan vital is more than we can say. It’s a perfectly conceivable thing that tomorrow a comet may fall upon the Earth and wipe out all man’s labor.

On the other hand, it’s a conceivable thing that man will someday learn to control the movements of comets. They may even control the starry systems. It seems certain that, if he’s given time, he’ll make himself master of the forces of his immediate environment. French philosopher Henri Bergson originated élan vital in his 1907 book Creative Evolution.

In the genius book, he addressed the self-organization question and spontaneous morphogenesis of things in an increasingly complex manner. Élan vital was translated in the English edition as “vital impetus”. Yet, many translate it as “vital force”. It’s a hypothetical explanation for organisms’ evolution, which Bergson linked closely with consciousness.

He also linked it with the intuitive perception of experience and the flow of inner time. Carl Rogers, one of the most influential psychologists of the 20th century, called élan vital self-actualization. More importantly, Ralph Waldo Emerson, a popular American essayist lecturer, and philosopher called it a vital force.

Henri Bergson and his élan vital

Born in Paris in 1859, philosopher and influential thinker Bergson firstly discussed élan vital. He also elaborated on what’s now known as process philosophy. This philosophy rejected static values in favor of values of motion, change, and evolution. He was also a master literary stylist, of both academic and popular appeal. It’s no surprise that he won the Nobel Prize for Literature in 1927.

After studying philosophy and mathematics in the Ècole Normale in Paris, he began studying science. Yet, the idea that science couldn’t respond to all his questions as it’s limited to quantifiable knowledge captivated him. It occurred to Bergson that there are many experiences that can’t be quantified.

Thoughts, perceptions, conscience, creativity, freedom, and life are qualitative, rather than quantitative, concepts. To understand the qualitative side of life, Bergson proposed that people use intuition rather than science. He understood intuition as the harmony between man and objects, which we perceive through their essence.

Intuition is the understanding of life

Intuition, then, is an understanding of life through experience and not solely through intellectual efforts. In his famous work, Creative Evolution, Bergson extended this analysis to the universe, proposing that consciousness began with a supreme élan vital. The fragmentation of this original impulse brought forth different forms of life.

Back then, Charles Darwin’s evolutionary theories were catching on. Darwin asserted that evolution occurs due to natural selection. A process where life forms adapt to their environment. Bergson disagreed. For him, life didn’t follow a rational path. It was a power based on an irrational impetus that science couldn’t explain.

It was difficult for Bergson’s theories to gain acceptance in the positivism-dominated academic world of the time. In 1899, he obtained a professorship at the Collège de France. Later on, his ideas gained more acceptance, being in demand as a lecturer worldwide. The importance he put on the creative act inspired artists.

Marcel Proust voiced a particular appreciation for Bergson. Bergson himself considered literature the ideal instrument to investigate the world of the spirit. He died in Paris on January 4, 1941 at the age of 81. His inner world studies influenced Freudian and Jungian psychoanalysis. Husserl’s phenomenology criticized science just as Berson did.

Carl Rogers and his self-actualization theory

The world widely regards Carl Rogers as one of the most eminent thinkers in psychology. He’s best known for developing the revolutionary psychotherapy method called client-centered therapy. Native from the United States, Rogers was also one of the founders of humanistic psychology. After receiving his Ph.D. at Columbia University, Rogers spent a number of years working in academia.

In 1946, Rogers was elected president of the American Psychological Association. Rogers wrote 19 books and numerous articles outlining his humanistic theory. Among his best-known works are Client-Centered Therapy (1951) and A Way of Being (1980). It’s no wonder he was nominated for a Nobel Peace Prize in 1987.

Though he created many theories during his career, the most important one was self-actualization or élan vital. Carl Rogers believed that all people possess an inherent need to grow and achieve their potential.

“The mainspring of creativity appears to be the same tendency which we discover so deeply as the curative force in psychotherapy—man’s tendency to actualize himself, to become his potentialities.”

According to humanistic psychologist Abraham Maslow, self-actualization is described as the full use and exploitation of talents, capabilities, and potentialities. Such people seem to be fully fulfilling themselves while achieving élan vital. They’re doing the best that they’re capable of doing.

Rogers and his fully-functioning person theory

Another relevant theory by this genius thinker that perfectly conceptualizes élan vital is the Fully-Functioning Person. It suggests that people who continually strive to fulfill their actualizing tendency are what he calls fully-functioning. A fully-functioning person is one who’s completely congruent and living in the moment.

Rogers also suggests that the fully-functioning person is one who truly embraces existential living.  In other words, they’re able to live fully in the moment. They experience a sense of inner freedom and embrace creativity, excitement, and challenges. Like many aspects of his theory, unconditional positive regard plays a critical role in the development of full functioning.

Those who receive nonjudgmental support and love can develop self-esteem. Of course, they also develop confidence, becoming the best person they can be and live up to their full potential. This fully functioning individual has received unconditional positive regard from others.

They don’t place conditions on their own worthwhile being capable of expressing feelings. Besides, this person’s fully open to élan vital, life’s many experiences. A fully functioning person is one who’s in touch with their deepest and innermost feelings and desires.

“The curious paradox is that when I accept myself just as I am, then I can change.”

Even way before élan vital’s appearance in Bergson’s 1907 book, there were many references. In fact, these appearances with distant anticipations of Bergson can be found in the work of another philosopher. It was no other than the pre-Christian Stoic philosopher Posidonius.

He postulated a “vital force” emanated by the sun to all living creatures on the Earth’s surface. The concept of élan vital is also similar to Arthur Schopenhauer’s concept of the will-to-live and the Sanskrit āyus or “life principle”. Bergson’s brilliant philosophy also positively influenced many.

In fact, they even tried to recreate it. Another French philosopher Deleuze attempted to recoup the idea’s novelty in his book Bergsonism, although Deleuze substantially changed the term itself. No longer considered a mystical, elusive force acting on brute matter, as it was before.

Élan vital considerably influenced the phenomenologist Minkowski and his own concept of a personal élan. The French army incorporated the doctrine of élan vital into its thinking leading up to WWI. They argued that soldiers’ spirits were more important for victory than weapons.

Believe it or not, many criticized Bergson’s philosophy. The geneticists saw no “life force” other than the organizational matrix in genes themselves. The British humanist biologist Huxley dryly attacked it. He remarked élan vital’s no better life explanation than operating a railway engine by its élan locomotives.

Numerous thinkers in time, including prominent psychologists, have used many concepts to describe this philosophy. But they all come to the same conclusion, that élan vital is our spark, our can-do spirit. After all, that spark put a man on the moon. Ready to recover your spark?

How to Find Time to Meditate
Finding time to meditate can often be quite difficult. However, with simple daily adjustments, it's possible to set aside a few minutes. Read more »

Wellness
When Anger Consumes You, It Burns Others

We've all been through situations that have upset us so much that our anger increased uncontrollably. Who hasn't experienced a simple spark…

Wellness
Learning How to Give Comfort

When someone goes through a difficult time in their lives, the last thing they want to hear are voices asking them to ignore their pain, to downplay its importance, or that…

Wellness
How To Express Your Feelings And Not Die Trying

Do you find it hard to express your opinions and feelings? Do you feel like you "could have said something,"…

Wellness
Why Stay in a Relationship You Don't Want to be In?

If you're in a relationship, there's always a possibility that you'll start wondering if you should stay in it or…