Earworm: Getting a Song Stuck in Your Head

It can be bothersome to have a song stuck in your head and not be able to get it out. Musical psychologists point out that the probability for you to experience earworm depends mostly on your mood. Feeling stressed or nostalgic may increase its likelihood. 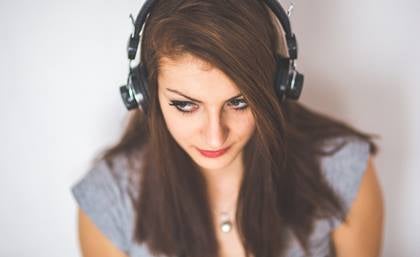 Getting a song stuck in your head, or earworm, is like falling into an infinite loop. No matter how hard you try, you can seem to stop signing it. And just when you thought you were over it, it comes back once again. The song’s melody, lyrics, and rhythm are like an echo bouncing in your head. Sometimes, this may be pleasant, especially if you really like the song. However, it could become frustrating when you can’t stop thinking about a song you’re not particularly a fan of.

We all know the brain is quite a mysterious organ. Said mysteries can be somewhat disturbing and puzzling at times, mainly when they experience phenomena beyond our control. For example, it’s known that 98% of people have experienced this sensation at least once. However, the University of British Columbia in Canada conducted a study which indicated that, in 15% of cases, experiencing this is unpleasant for the individual.

In these latter situations, obsessive-compulsive disorder comes into play. When it comes to this disorder, music can act as something tremendously disruptive for the individual. However, for the rest, it usually is never pointless. Most of the time, if not always, it becomes an anecdotal fact that we share in conversations using the typical phrase: “You know, I can’t get this song out of my head!”

Earworm: Getting a song stuck in your head

Earworm is the term psychologists use to define this phenomenon. With this term, they refer to those catchy melodies that adhere to your brain and that you just can’t seem to get rid of. Thus, some people often say that this phenomenon is especially common with artists such as Lady Gaga, Queen, Abba, Beyoncé, Adele, Coldplay, etc.

Now, these musicians and singers make you experience earworm probably due to the fact that exposure to their songs is higher. They’re popular artists, which is why you might hear their songs on the radio or in stores more often. Nonetheless, it’s possible to get any song stuck in your head; no matter the melody, chorus, or the person who sings it.

It’s even possible to suffer this phenomenon without needing to listen to specific music. In fact, sometimes it’s enough for something to remind you of a certain song for it to be installed in your mind all of a sudden. Has that ever happened to you? Let’s see what some experts say about why a song gets stuck in people’s heads.

The simpler it is, the more it adheres to your mind

Most composers and music producers know this very well. The simpler and more repetitive a song is, the catchier it’ll be and the more likely it’ll be that the public will remember it.

Dr. Kelly Jakubowski, from Durham University, showed in a study how an earworm is easily produced by these types of musical compositions.

This data is certainly very interesting. Next time you find yourself repeating a song in your head over and over again, do some insight and figure out how you feel at that moment.

Expert in musical psychology Dr. Vicky Williamson explained that, on average, it’s more common for you to be receptive to experiencing this phenomenon when you’re feeling stressed, when you haven’t gotten much sleep, or even when you feel nostalgic.

Somehow, it’s as if a tired or sentimental brain had a greater predisposition to initiate repetition patterns, especially when it comes to musical stimuli.

Your memory acts as a trigger

We touched on this previously. It isn’t always necessary to listen to a song in a specific place, on your smartphone, on the radio, or in a store for you to think about it nonstop. In some cases, you’re the one who initiates this phenomenon by remembering a letter, a melody, a song from the past, etc.

A trigger may suddenly arise in your environment. The shoes you were wearing on that road trip, the treat that reminds you of childhood experiences or when your grandmother would sing a song to you.

If there’s something we know, it’s that the brain loves to remember. Your emotional memory is associated with your musical memory, so much so that these structures are hardly damaged by neurodegenerative diseases such as Alzheimer’s.

Is it possible to stop the earworm phenomenon?

Sometimes, you may feel extremely bothered when you experience earworm. Especially when you can’t stop thinking about a song you’re not too fond of. To break this repetitive mechanism that your brain started arbitrarily, it’s important to bear in mind the following suggestions:

Lastly, neurologists point out that it’s recommendable to chew gum to reduce the intensity of an earworm. Jaw movement interferes with musical memory. Also, it’s important to note that this phenomenon usually lasts less than 24 hours.

“Music is the shorthand of emotion. Emotions, which let themselves be described in words with such difficulty, are directly conveyed to man in music, and in that is its power and significance.”

Music and Emotions
Sound and music cause us emotions, and these alter our physiology. Music has an effect on many of our important memories. Read more »
Link copied!
Interesting Articles
Brain
What Happens to Our Neurons during Sleep?

Brain
Glial Cells: The Functional Basis of the Brain

The brain is one of the most important organs in the body. It allows us to speak, move, feel, and…