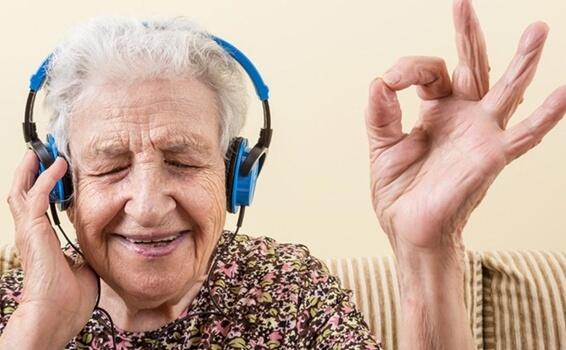 Music and Alzheimer’s have a strange, powerful, fascinating relationship. Patients in an advanced stage of the disease suddenly experience an amazing awakening when listening to a song from their youth. That music full of rhythm that almost, without knowing how, unlocks memories and cognitive abilities until wrapping them in an ocean of wonderful emotions…

Some say it is little more than a mystery. Neurologists say that it is our brain, that for reasons we still do not know, areas linked to long-term musical memory are still intact and preserved. Psychologists, on the other hand, as well as therapists and family members who care daily for their loved ones, know that music is above all a consolation for people suffering from this devastating illness.

Listening to music or singing can be very beneficial emotionally and behaviorally for people with Alzheimer’s disease and other types of dementia.

Maybe many will recognize the name Glen Campbell. He was a United States country music icon throughout the 60s and 70s. He died not long ago, after a hard coexistence with Alzheimer’s. His could be any story. Like that of many others who having had a fabulous life, full of successes, difficulties and unforgettable moments, he faced a disease that erases or blurs memories.

The case of Glen Campbell has been one of the most striking from a clinical point of view for a very specific reason: he never stopped singing or playing his guitar. Moreover, when he did, he regained part of his lucidity, to the point of being able to make several tours. At certain moments he spoke with his audience, commenting that, curiously, he had managed to disengage from alcohol, but not from that “detestable” disease.

It is a fascinating case. A story that invites us to ask ourselves what is behind that relationship between music and Alzheimers…

Music and Alzheimer’s, a mystery that is beginning to be solved

It has been known for a long time. Scientists have always been very aware that there was a unique link, a retaining wall between music and Alzheimer’s where a strange agreement was reached: the progressive degeneration of the brain does not affect those structures related to long-term musical memory. It was not until relatively recently that, thanks to new neuro-imaging techniques, something as interesting as this could be observed.

According to a study carried out in the Max Planck Institute of Cognitive and Human Brain Sciences in Leipzig, researchers located the areas related to musical memory for the first time. They discovered, as expected, that they were (almost) intact.

Dr. Jörn-Henrik Jacobsen, the lead researcher, said that until recently we believed that our musical abilities were located in the temporal lobes. However, the diagnostic tests clearly showed something else: the musical memory is located in the supplementary motor cerebral cortex. Alzheimer’s and its destructive shadow barely impacts this special area of the brain, this magical corner. There is less neuron loss, and the amyloid protein deposit is not as affected either. That is, the area is still active, it is still functioning.

Also, here is another interesting aspect. As the disease itself advances by eroding our cognitive processes, new connections appear in the gingival groove. It is as if the brain itself tried to preserve, almost desperately, a part of the person’s essence. It does this by activating areas related to music and our emotions.

And that is where an imprint of our vital breath remains. It’s there, waiting in silence for the music to awaken us for a moment. A wonderful fragment of time where we can return to being (almost and only almost) ourselves …

Benefits of music in patients with Alzheimer’s

Music is a primary media in our autobiographical record. There are moments in our life cycle that are linked to a song, a melody, a specific context, the people who made it up and the emotions experienced.

So, when an Alzheimer’s person hears a melody that is meaningful to them what we get is the following:

How can I help my loved one with music if they have Alzheimer’s?

At this point, knowing that there is a very positive direct relationship between music and Alzheimer’s. It is very possible that many of our readers who have a family member with this disease. They wish to enjoy a moment of connection with their loved one. What’s more, what we want above all else is to see a smile drawn on their faces.

Let’s look at the guidelines for doing this in the best way:

Finally, remember to pay attention to their reaction. It is possible that some music does not please them or that there are others that invite them to react in a more positive way. The most important thing is that we are present with them, that we feel they are with us. And that for a moment, we embrace them, feeling how their essence, their authentic being emerges again…

How to Improve Your Memory and Increase Your Intellectual Capacity
In any and all cases, having a good memory depends on our brain's health and vitality. Gray matter ages, just like the rest of our body. Read more »
Link copied!
Interesting Articles
Emotions
Why are Emotional Presents Useful for Children?

Emotions
5 Emotions that Come with a Personal Crisis