People who knew Donald Woods Winnicott said he was a clinical genius. This English pediatrician, psychoanalyst, and psychiatrist helped thousands of parents better understand children's emotional lives. He deepened in the transitional processes that promote the progressive individuation of the self. In fact, the establishment of the foundations of the mother-child bond happened thanks to him. 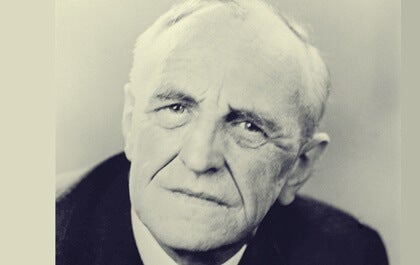 The theoretical and practical inheritance that Donald Woods Winnicott left the world was key within the field of pediatrics. People often define him as an independent figure who made a lot of progress in the psychoanalytic framework. He knew how to situate himself with his own voice between the Freudian and Kleinian current (the latter approach inherited from Melanie Klein, creator of the theory of psychic functioning).

Throughout the 1940s, Donald Woods Winnicott contributed extensive research and work to the British Medical Journal. In addition, he wanted to have his own position in the field of child psychiatry and make a contribution to the advancement of this science. For this reason, he avoided focusing on a single theoretical school to contribute innovative ideas on the psyche of babies and children.

His books continue to be published on a regular basis to this day. Also, the public, and especially parents, receive with interest works as interesting as The Spontaneous Gesture or Talking to Parents.

Donald Woods Winnicott was born in Plymouth, England in 1896. He belonged to a Methodist upper-class family involved in politics who followed old British traditions. Now, as revealed in many of his biographies, his childhood was advantageous.

His father Frederick, a merchant and mayor of Plymouth, wasn’t around much. However, Donald had an affectionate, communicative, and nurturing mother. Also, he had two older sisters and a babysitter. Thus, he grew up in a safe environment. One in which he could express fears and concerns without barriers and where he felt validated at all times. Of course, all this would undoubtedly mark his subsequent works.

In 1910, he enrolled at the Leys School to study science and later enrolled at Jesus College in Cambridge to train as a doctor. However, due to the outbreak of World War I, Winnicott had to interrupt his studies in order to serve in the navy.

After the war, Donald Woods Winnicott completed his college studies and specialized in pediatrics in 1920. From that moment, he began to train with Melanie Klein, an Austrian psychoanalyst who departed from the theories on Sigmund Freud’s unconscious. Mainly, to develop his clinical practice in pediatrics. However, various discrepancies arose between the two over time.

Klein and Winnicott differed in many ways. However, he integrated several of the psychoanalyst’s theories, such as the concepts of the internal world, the power of fantasy, and the usefulness of play. He did so with the purpose of observing primitive defenses, fears, and states, such as reactive depression in children.

In 1931, he published Clinical Notes on the Disorders of Childhood. Then, Maniac Defence and The Family and Individual Development. With these contributions, Donald Woods Winnicott established a more coherent and solid psychoanalytic foundation. This is why his colleagues, professors,  and a large part of the psychoanalytic community highlight his innovative ideas.

Obviously, he received rewards in the form of outstanding appointments in the academic field. He took over the presidency of the British Psychoanalytical Society and always served as an exceptional bridge between psychiatry and psychoanalysis. He died in London on January 25, 1971, at the age of 74.

Winnicott’s work focused almost exclusively on the mother-child bond. The maternal figure was an essential psychological support for the child to develop an authentic, healthy, and happy self, according to Donald Woods Winnicott. These are his main contributions:

1. A baby is nothing without its mother

Maternal availability, that safe and affectionate absolute closeness, is what shapes a child’s psychic entity. A baby is nothing without it. This is because they need a physical and affectionate wrap to be able to develop in every way.

Transitional processes are stages that allow children to move from one stage to another. Thus, doing it safely, through parental support, will ensure success. An example of this is the transition from breastfeeding to solid feeding or from babbling to talking or from crawling to standing on their two feet.

3. Games are a bare necessity

A child comes into contact with his sense of existence and with his identity when they play. This is a stage where to imagine, test, experiment, share, learn, and devise, etc. What happens in their psychic universe promotes their evolution.

4. Parenting should be a joy and the mother must trust herself

Donald Woods Winnicott was a psychiatrist who focused on positivism and a happy upbringing and educational process. Likewise, he always maintained the conviction that a mother must trust her instincts. This is because they’re the only ones who know what’s best for their children at all times.

5. Donald Woods Winnicott on the danger of the “false self”

The danger of the false self arises when a child doesn’t feel that their parents care for, understand, and love them. In this situation, they choose to be someone else. They’ll always be needy and will always seek attention. They’ll have voids and won’t have the opportunity to individualize and develop their personality in a healthy manner.

To conclude, Winnicott contributed a lot to the evolution of psychoanalysis. This is because he brought the parental figure (the mother) to light as the key to a child’s early relationships.