Have you heard of doll therapy? In this article, we talk about some of its benefits. 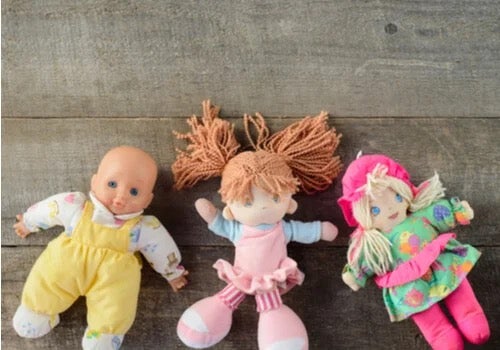 Over time, necessity has dictated the need for different non-pharmacological treatments for dementia. For example, music therapy, occupational therapy, and animal therapy. However, they all have one thing in common. They reconnect the patient with their earlier life. In this article, we’re going to talk about a more recent treatment: doll therapy.

We’ll first clarify the definition of dementia. Firstly, the Oxford Dictionary defines it as, “A chronic or persistent disorder of the mental processes caused by brain disease or injury and marked by memory disorders, personality changes, and impaired reasoning”‘.

Secondly, the WHO defines it as, “A syndrome – usually of a chronic or progressive nature – in which there’s deterioration in cognitive function (i.e. the ability to process thought) beyond what might be expected from normal aging”.

Finally, Nitrini and Dozzi (2012) claim that dementia is a syndrome characterized by the presence of persistent cognitive decline which interferes with the individual’s ability to independently carry out their work or social activities.

There are different types of dementia. According to the WHO, the most common are:

However, each of these diseases affects each individual differently. Therefore, for treatment to be successful, individualized and focused plans should be put into place for each patient. Treatment is deemed successful if the objectives set out at the beginning of treatment are achieved.

The origins of doll therapy

This non-pharmacological therapy started in the United States. As a matter of fact, Rodriguez (2018) confirms that Anne Burnett, director of The Limes Care Home (a center in the USA for people with dementia), created doll therapy.

Anne had worked with an older woman who had lost a baby when she was young. In fact, she was always calling out for her lost child. Therefore, one day, Anne tried giving her a teddy bear when she was calling for her baby and it calmed her down. From that moment on, Anne used the same method with other patients, both men and women.

The benefits of non-pharmacological therapies

Drug treatment for dementia is often unavoidable. However, it’s becoming more usual to combine it with non-drug therapy.

For example, in Salamanca, Spain, there’s one such pioneering center. Here, they’ve developed various interventions balanced between pharmacological and non-pharmacological treatments. This center is called the Centro Referencia Estatal (CRE).

Caballo, Arroyi, Portero, and Ruis-Sanchez (2013) state that some of the non-pharmacological benefits for the patient are:

In short, the use of these interventions has a very positive effect on both the lives of people with dementia and their families. Unfortunately, there’s currently no way of reversing the symptoms of certain dementias such as Alzheimer’s. However, this doesn’t mean that there’s no way to slow down the progress of its symptoms.

Therapies
How You Can Teach Your Psychotherapist

Psychotherapy is an experiential and dialectical process. In this kind of therapy, your therapist influences you. However, you also influence…