Do You Know What Babies Learn To Do Between 4-6 Months? 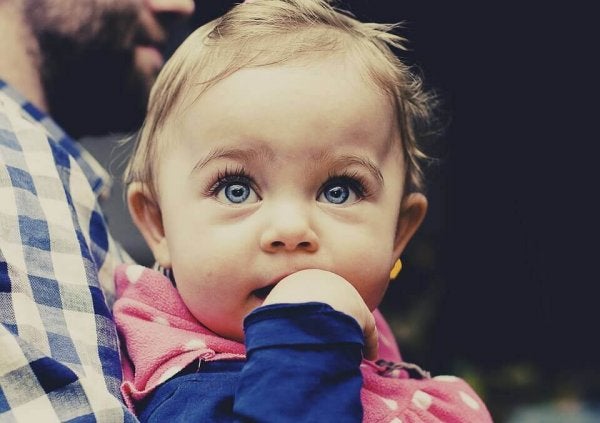 Do you want to learn about the usual development milestones for a 4 to 6 month-old baby? Of course one main thing is that they have an extreme curiosity about the world around them. Everything calls their attention. They become like little watchers amazed by every single thing going on around them.

You should discuss any doubts you might have with their pediatrician before you start ringing any kind of alarm bells. They’re professionals who can help guide you through any doubts you may have as a father or mother. And they can point out any developmental delays that might be a warning sign, but only if there’s a problem.

A baby’s fourth month is one full of smiles

It’s roughly around the fourth month of life when babies start to get some control of their head. They can finally hold it up on their own. This is a truly important step forward in a baby’s life. And they’re probably already starting to pick up objects more easily. Plus they pay attention to the objects that interest them the most. They can also perfectly recognize their mother.

You can try to form a better connection with your baby by smiling. Babies like being smiled at and they’ll joyfully give a smile right back. On the other hand they don’t like to be alone and you can be sure they’ll let you know. They’ll do it in their own way, of course. During this month they’ll have fun with any kind of mirror put in front of them. They won’t recognize the person they see, but they will interact with the human figure without realizing who it is.

A baby at this stage will be the center of joy in any room. That’s because they especially like to watch and pay attention to people who smile at them. They might start giggling a lot during this phase of development.

The fifth month, or the time when babies put everything in their mouths!

During their fifth month of life, babies will have the tendency to pick up objects. They’re exploring their environment and will take full advantage of this ability. They’ll want to put the objects they pick up into their mouths because they’re starting to experience a sense of taste.

Your little one will start to switch objects from one hand to the other. Babies are very active during this stage of their growth. They move a lot more because they have better control of their head and limbs. They might even start to turn over on their own while they’re sleeping.

But this is also the month when they won’t smile at anyone and everyone. They’re learning to tell apart the faces that are familiar to them. This means they’ll smile at the faces they’re most used to seeing.

Let’s dig deeper into the milestones of their sixth month

During their sixth month of life babies often learn to turn over. That’s why you have to be a bit careful because they might fall if they’re in a high place, like on a changing station. Their teeth also start to grow, which may cause them some discomfort, which they’ll complain about.

They’ll also start to focus their attention on their feet. And this will bring a lot of smiles to their parent’s faces, because they literally put their feet in their mouths and suck on them. Their hands will also start to get stronger and they’ll be able to switch objects from one hand to the other more easily than before.

At this point babies’ attention is much more focused on the people who give them most attention and take care of their needs. That’s why a baby’s first months are so important for the connection created between mother and child, and father and child. It’s a crucial moment in the little one’s emotional development. So there’s no doubt that if you’re there for them and know how to take care of their needs the moment they appear you’ll be the perfect parent!

9 Months: Milestones in a Baby’s Development
Babies never stop growing! A baby at 9 months is at a stage of real adventure and discovery. Human beings have such an enormous capacity for learning, especially with an environment that facilitates it. Read more »
Link copied!
Interesting Articles
Health
Stimulating the Vagus Nerve Improves Overall Health

We tend to think that we are a certain way, that it hasn't changed since we came into the world, and…

Psychology
5 Steps to Stop Sabotaging Yourself

Getting out of the habit of sabotaging yourself is not easy. A lot of people waver right when they're about…

Psychology
How Can We Help Sexual Abuse Victims?

The La Manada case shed some light on a reality that we’d forgotten for a while: how difficult it is…