Do Women And Men Perceive Infidelity In Different Ways? 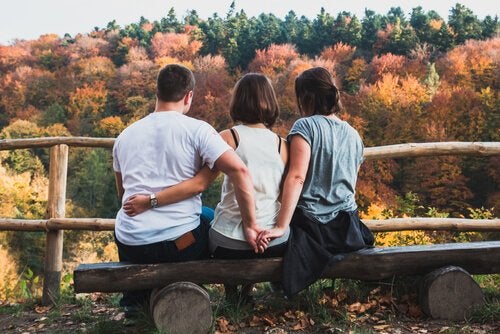 Infidelity is one of the biggest tests that a relationship can go through. In most cases, it will end the relationship. The problem often arises from the differences that may exist in the definition of infidelity. It seems that men and women do not understand it in the same way.

Sometimes it isn’t  easy to determine if infidelity has occurred or not. The most common definition, is that infidelity happens when a person has sex with someone outside of the relationship they are currently in.

But what about sending text messages to someone and keeping it a secret? How about receiving suggestive photos through social networks or other means of digital communication? And, can staying friends with a former partner be considered infidelity? Especially when that person is now in a new relationship.

These are certainly important issues. All couples should speak about them and try and reach a consensus about where the limits are. This is especially important if we believe the findings of a recent study. In the research they found data that supports the hypothesis that men and women generally have very different ideas about what it really means to be unfaithful. Not clarifying it, and not reaching an agreement can lead to serious problems later on in the relationship.

Perceptions of infidelity differ between men and women

The research published in Sexual & Relationship Therapy has identified the biggest differences between men and women in the definition of infidelity. The authors considered whether perceived infidelity can be predicted from a person’s sex, religion, fear of intimacy and sensitivity to rejection. The study states that “Knowing what your partner believes is infidelity could save a relationship if both share the same perspective. This makes the subject of different perceptions a concept worthy of investigation.”

To determine how gender, among other factors, influences perceptions of infidelity, the researchers asked 354 university students to complete a questionnaire. The participants classified different acts from 1 (definitely not infidelity) to 4 (definitely infidelity). These included sexual acts, such as kissing or sexual intercourse; emotional actions, such as falling in love, but not acting accordingly; and fantasizing, like going to a strip club or watching pornography.

The questionnaire also included questions intended to determine other aspects that could have a significant relevance to the perception of infidelity. Two of these are the fear of rejection and anxiety. With respect to fear of intimacy and sensitivity to rejection, there was no difference between the genders. However, women considered more often than not that “connection” in itself meant infidelity, understanding by “connection” the exchange of intimate thoughts and feelings, especially at the mental or spiritual level.

Women in the study were more likely to consider acts based on sex and emotions as infidelities. On the other hand, most men consider that only the actual act of sexual intercourse qualifies as infidelity. The women felt that the exchange of intimate thoughts and feelings, especially when the exchange is mental or spiritual, could also be considered as unfaithfulness. Of course, there would be exceptions in both sexes.

The suggestion that women include a greater variety of acts, behavioral or mental, as acts of unfaithfulness is supported by previous research. “This pattern of findings suggests that women are more sensitive than men to possible violations related to infidelity within the limits of a romantic relationship,” other authors write. “Those who are higher up on the “scale of connection” are more sensitive, possibly as a means of safeguarding their relationship with a loved one.”

The study could help relationship therapists educate their patients. Regardless of what they have done, or can do, if the couples decide to go ahead then they must reach a clear agreement about the limits. But what can happen in some cases is that one considers their partner to have been unfaithful, whereas their partner doesn’t agree. Working on this key point is vital to achieving a reconciliation and the consensus that we have been talking about.

If someone doesn’t realize that their partner considers some actions to be unfaithful acts, then it’s not surprising that they would continue doing them. “An ideal result of therapeutic intervention would be a greater understanding and communication between the partners, a true commitment to each other, and a truly satisfying relationship”, concluded the study.

Far from being a purely abstract issue, individual differences in the “infidelity criteria” can shape the way a relationship goes, generating resentment and misunderstandings. Even though it isn’t an easy thing to talk about, this should be one of the conversations that every couple should have. It should ideally take place at the start, in order to ensure a happy and healthy relationship.

Love needs to have a future, at least while it lasts. In other words, it needs to clearly feel the existence…

Wellness
Do You Know What Intrapersonal Intelligence Is and Why It's So Helpful?

Diving deep into your thoughts and practicing introspection is part of what Howard Gardner defined as intrapersonal intelligence. These skills of…

It's hard to accept that nothing will be the same. But things do go back to normal, as hard as…