Do All Roads Lead to Neuroticism? 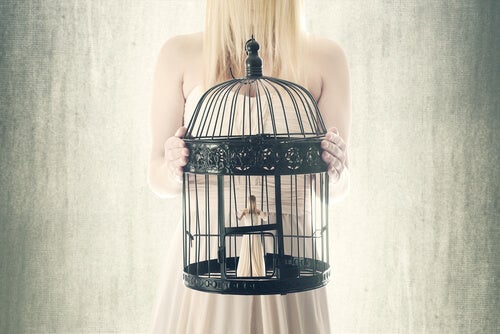 Neuroticism is a personality trait that has a significant biological foundation. It makes people with it vulnerable to psychological disorders because it’s associated with both poor stress management and a tendency to expose oneself to psychologically damaging stimuli.

Below, we’ll briefly explain exactly what neuroticism is and how it works in different psychological disorders, as it can have different effects with each one.

Neuroticism as a personality trait

Neuroticism is a personality feature (made up of behavioral, emotional, and cognitive tendencies) that people mainly inherit from their parents, making it largely biological in nature.

This doesn’t mean that it can’t be changed. But the tendency is with the person from the moment they’re born. Throughout the person’s life, their environment will either make this tendency stronger or weaker.

Practically all theories of personality include neuroticism as a basic feature. It can be found in:

Therefore, it’s clear that whether it’s part of a lexical, empirical, or factorial analysis, most researchers consider it to be a part of the basic structure of personality. All models include neuroticism because it outlines each person’s basic emotional tendency.

Given the relationship between neuroticism and emotions, now we’re going to analyze it. We’ll look at how it influences three common mental disorders: depression, anxiety, and addiction.

The role of neuroticism in different psychological disorders

Neuroticism is associated with a higher number and intensity of depressive symptoms. This is because for people with high neuroticism it takes less negative stimulation to feel upset or uncomfortable than people with low neuroticism.

Therefore, it indicates higher sensitivity to distress and thus affects the course of depression. It amplifies negative emotions, making them more intense and intolerable. So it becomes more likely for the hole of depression to just get deeper and harder to escape.

Neuroticism feeds into anxiety, since the person fixates on the uncertainty they can’t tolerate. For example, they’ll avoid being in uncertain situations, taking risks, and experiencing any degree of physical, psychological, social, or emotional insecurity. In order to successfully overcome anxiety, the person must confront it. But neuroticism keeps these people in their comfort zone, hindering recovery.

Neurotic people try to control every aspect of possibly risky situations, however unlikely the risk may be. They waste a lot time, money, and energy just to avoid risk. For example, they’ll leave the house extremely early to get to an appointment on time, just to give themselves wiggle room in case one of the many dangers they envision actually happens.

“Sunday neurosis, that kind of depression which afflicts people who become aware of the lack of content in their lives when the rush of the busy week is over and the void within themselves becomes manifest.”

This can also be applied to much more serious contexts, such as a panic attack. The most effective treatment for panic disorder involves gradual exposure to the situation they fear. It’s evident how high neuroticism plays into this situation.

Like we said before, people who rate high on the neuroticism scale are very resistant to exposing themselves to things they fear, and will avoid taking that small risk at all costs, even though it would lead to habituation and finally the end of their anxiety. The higher the neuroticism, the greater the resistance to exposure. Then, the more anxiety the anticipation of said exposure will cause.

People with high neuroticism are more likely to develop an addiction. Why? Because it pushes them to avoid any degree of discomfort and elevates their perceived level of stress.

High stress levels mixed with high sensitivity to distress makes them feel psychologically exhausted and overwhelmed by their daily problems. Substance abuse can be a form of escape for them. After all, it releases them from the constant preoccupation they feel.

In other words, the emotional exhaustion produced by high sensitivity to discomfort turns everyday challenges into threats. Since they need to avoid discomfort and control what happens around them, they get extremely overwhelmed.

The resulting psychological exhaustion makes it very difficult for them to manage their stress well. So, the effects of psychoactive substances in depressants like alcohol and marijuana give them a brief respite. A break from discomfort and stress.

What can people with high neuroticism do to change?

First of all, it’s essential to seek help from a psychologist who can perform a personality assessment and determine exactly how neurotic they are.

That’s because both our own perceptions of ourselves and other people’s perceptions of us can be incorrect. Therefore, they might have an image of themselves that doesn’t reflect their actual level of neuroticism.

A psychologist is the most qualified person to determine what therapeutic steps to take. In general, psychotherapy can help a person manage neuroticism by focusing on the following:

In addition, psychotherapy can also help highly neurotic people work towards goals that matter to them. It can break down the wall that they built to protect themselves. Scientific evidence shows that personalities are not completely fixed; they’re malleable to a certain degree. We’re in a constant state of social, emotional, and behavioral change in response to our environment.

Therefore, there’s no room for the excuse “that’s just how I am.” It’s a mistake to think you can’t change. If you work to become a better version of yourself, you can reach your goals.

How Does Anticipatory Anxiety Condition Us?
Anxiety can be a positive thing to prepare us for danger, but anticipatory anxiety can be very negative.Read on to find out how we can avoid this condition. Read more »
Link copied!
Interesting Articles
Psychology
7 Signs That You're a Self-Destructive Person

In theory, we all look for happiness and act following in its footsteps. In practice, many human beings don't follow…