We normally feel disgusted when we're about to eat something that we don't like, but sometimes we can also feel disgusted about an idea or lifestyle. Is disgust possibly a cultural condition? 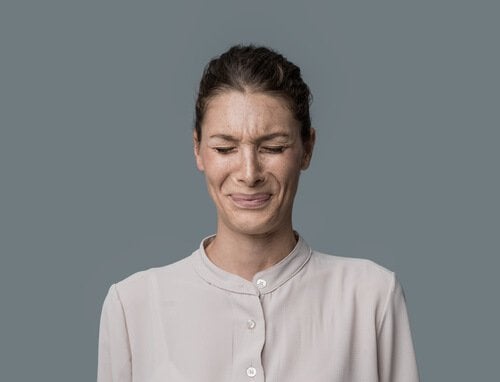 Do you remember the last time you experienced disgust? How did you feel? Did it happen with food? Did you try the food again? Would you be able to eat an insect? Do you think being disgusted by one thing or another is a cultural thing?

From a young age, disgust remains present in our lives. For this reason, it’s important to know what lies hidden behind this emotion. Sometimes, something more, like the way we perceive the world, lurks behind disgust. Let’s take a closer look.

When do we experience disgust?

We feel disgusted when we eat something that’s gotten bad or are close to it. Disgust is an adaptive reaction that prevents us from harming our health in certain situations. But this emotion can also arise from an idea that disgusts us. Therefore, the intention of avoiding being contaminated lies behind this emotion.

For example, when we open the refrigerator ready to eat a good slice of watermelon and find it half rotten, we just end up throwing it away. Its rotten state informed us that it could make us sick. Another example might include wanting to pour milk into our coffee, but smelling something sour when open the carton. This makes us just pour the milk down the drain.

The bad appearance and smell of many foods tell us that we better throw them away rather than eat them, as they could make us sick. In the same way, we can consider disgust an adaptive emotion that protects us from harmful situations.

According to different studies, disgust is related to the insular cortex. In fact, injuries in this structure prevent the individual from both experiencing this emotion and recognizing it in others.

The experience of disgust may vary between cultures. Despite being an emotion that helps us avoid bodily harm, it’s true that certain things depend on culture. For example, some foods can produce disgust despite being non-toxic. But it’s important to note that this emotion is accompanied by a characteristic facial expression that can be observed in people who are blind from birth, in addition to having a typical physiological, psychological, and behavioral response.

For example, Spain’s national dish is paella, which contains shrimp or prawns. Although this dish is considered a delicacy in that country, few Spaniards would feel excited about the prospect of eating a plate of grasshoppers or crickets. However, in some countries, insects represent a real delicacy, just like paella. In others, they arouse the deepest aversion.

A recipe can taste delicious to some and horrible to others, even in the same country. Snails represent a clear example of this. Therefore, this emotion also depends on the individual’s personality and the education they receive.

It’s true that there are more basic issues that tend to make us feel disgusted, such as a nauseating odor, but it’s important to take into account the influence of culture. Depending on our culture, we can feel more or less disgusted about something.

Undoubtedly, experiencing this emotion helps protect us from toxicity. But this emotion goes beyond food. Many people also express the disgust they feel toward another culture, race, religion, and country, among other things.

Some people perceive other ideologies as toxic to themselves. They think that those ideologies can damage their beliefs or life in general. This type of disgust contributes to, for example, racism and xenophobia. If we consider other races and people toxic, we reject them and avoid them.

According to the results of the studies carried out by Paul Rozin, a psychologist who dedicated himself to studying this emotion, disgust is a rejection of events that make us remember our animal nature.

Rozin and his collaborators pointed out that although disgust is a defense mechanism that originated to avoid bad food, little by little it has dissociated from those elements. Thus, we can feel disgusted by someone who violates our moral rules.

In addition, according to these authors, the fact that we feel disgusted by people who are racist, abusive, or display other negative behaviors could mean that we’re protecting human dignity within the social order. What do you think?

It’s Time to Meet Your Emotions!
An emotion is like a warning sign from our body. When they appear, they're trying to show us something. Why not look further into them? Are we afraid? Read more »

Link copied!
Interesting Articles
Wellness
A Partner Would Be Nice, but Not Necessary

Ever since Aristotle said "love is composed of a single soul inhabiting two bodies," it seems as though the need to have a…

Wellness
How Do You Know If Your Partner Really Cares About You?

Maybe this article’s subject seems rather naïve to you. Who can’t tell if they are loved by their partner or…

Wellness
The 5 Levels of Sadness

Sometimes we find ourselves consumed by an indescribable sadness, silent, with our foreheads pressed against the window and our souls in our pockets. We don't really know what causes it,…

Wellness
Self Awareness: The Key to Happiness

Happiness. What does it really depend on? Is it something one finds by chance due to fate's plans or at random? Does…

Healthy Habits
The Psychological Benefits of Living in a Rural Setting

Living in a rural setting is becoming more and more popular due to its benefits. Weekend escapes to nature are…