Bakunin's quotes bring us closer to anarchy when it comes to a philosophical position. This isn't chaos, disorder or debauchery, but a perspective that aims to establish the highest possible level of autonomy in society. 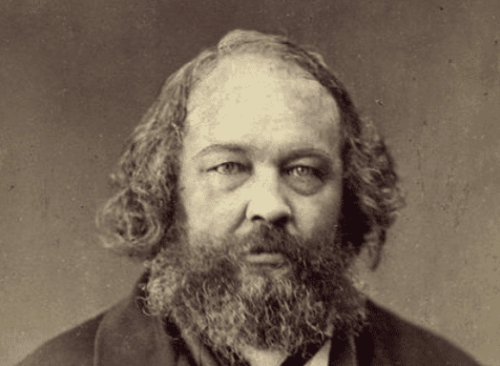 Bakunin’s quotes horrified his contemporaries and, as strange as it may seem, they never ceased to amaze. This Russian man is considered the father of anarchism and one of the strongest influences of atheism.

Mikhail Bakunin was a philosopher who had good friends and led a Bohemian life. He greatly admired Hegel and deeply criticized the despotic actions of the Russian tsar in the 19th century. Also, he wasn’t fond of Karl Marx‘s ideas, as he considered him authoritarian.

In Bakunin’s quotes, there are reflections about very diverse human realities. However, it’s clear that he places special emphasis on the issue of power. Basically, he questions the power of the state and religion.

“I don’t recognize infallible authority. Such a faith would be fatal to my reason, to my freedom. I would immediately become a stupid slave and an instrument of the will and interests of others.”

This is one of the most iconic Bakunin quotes. It perfectly sums up his posture against power. It’s also an affirmation in which he declares his eternal irreverence against all kinds of absolute authority.

If there was an infallible authority, freedom wouldn’t be more than a word. They would be in charge of pointing out what you should or shouldn’t do. Thus, why use individual reason, if said authority already knows the truth?

The plurality of gods

“The mere plurality of the gods of the Greeks is a guarantee against absolutism. Furthermore, there was no such morally monstrous logical contradiction between good and evil.”

This is one of Bakunin’s quotes that can be somewhat shocking for those who believe in deities. Beyond religious convictions, what this statement raises can be divided into two parts. First of all, that monotheism and absolutism are equivalent.

Secondly, he presents the contrast between good and evil as a logical contradiction, one that’s morally deplorable as well. Thus, he declares that good and evil are relative concepts and that they never exist in their pure state. True ethics is reflective and not prescriptive.

“Freedom can only happen in society and only in one that promotes the equality and solidarity of each and every individual.”

In this statement, Bakunin refers to a fundamental fact. Freedom is a good that only exists where there’s more than one person. An isolated individual can’t speak of freedom, as long as there’s no point of reference from which to be free.

Freedom is social because power is a social phenomenon as well. Both concepts complement each other and coexist. You’re free to the extent that there’s self-determination and that it doesn’t imply exclusion or isolation.

Another of Bakunin’s quotes on freedom

“I am truly free only when all human beings, men and women, are equally free.”

In this quote, Bakunin insists on the collective meaning of freedom. This means that, when individual freedom is based on the oppression or slavery of others, it can’t be referred to as freedom.

For someone to be fully free, there must be no restrictions on anyone’s liberties. In this sense, a free society is one in which everyone is their own boss and doesn’t have to obey others.

“I’ve considered that the most sacred of all my duties is to rebel against all oppression, regardless of the author or victim.”

This is another of Bakunin’s quotes that captures his philosophy of anarchism. Contrary to what some people think, the father of anarchy wasn’t a propagandist who wanted to create chaos. He promoted autonomy and self-determination instead.

People currently use the word anarchy in a confusing way. Many believe it’s synonymous with chaos and debauchery. In its essential sense, this position merely advocates the abolition of all forms of authoritarianism.

“Political freedom without economic equality is a pretense, a fraud, a lie, and the workers want no lying.”

This is a nineteenth-century idea that still remains in force almost two centuries later, although the world is very far from seeing its conditionals transformed into reality. He speaks of the deep correlation between the political and the economic, particularly in terms of freedom.

Economic equality is one of the ideals of socialism. It refers to the idea around the abolition of exploiters and exploited. Indeed, people who decisively depend on others for their livelihood don’t have full political freedom.

A blow is a blow

“When the people are being beaten with a stick, they are not much happier if it is called the People’s Stick.”

You could consider this one of the most forward of Bakunin’s quotes. There were no socialist or allegedly communist regimes in his era. They did appear in the world later, although only formally on many occasions.

Bakunin anticipated this and questioned the capacity of repression that supposedly egalitarian regimes have. On many occasions, these powers act in the name of the people but make impositions in a similar way to the systems that create and maintain inequality.

Bakunin’s perspective could be more ethical than political or economic as such. Its absolute rejection of all forms of power is more ideal (utopian) than a reality that may be within the reach of the people. Even so, it’s still interesting to read and learn about his wonderful way of thinking.