The Roman philosopher Cicero was executed by the Roman Empire for being an "enemy of the state." His ideas live on, however, through these timeless quotes. 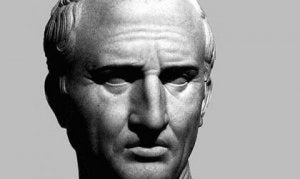 The words of famous Roman philosopher Cicero have survived the passage of time because they’ve never lost their relevance. It’s surprising that these century-old ideas still have meaning for us and have lasted in spite of how much the world has changed.

Many people consider this Roman philosopher and historian to be one of the first humanists. In his day, he wasn’t just famous for his philosophy, but also for his accurate political analysis.

Cicero’s quotes span a wide range of subjects, from friendship to love to how to run a government. He saw the world through an antidogmatic and ethical lens. The quotes we’ll share today include some of his most important ideas.

“For not only is Fortune blind herself, but as a rule she even blinds those she has embraced.”

One of Cicero’s recurring themes is the rejection of dogmatism. He hated rigid thinking and believed it to be a defect that led to mistakes. That idea is pretty clear in this quote:

“No well-informed person has declared a change of opinion to be inconstancy.”

Changing your mind doesn’t mean you are flakey or flighty. On the contrary, it means you are intelligent. Being able to change your opinion means you have an open mind. No one who is in touch with reality has unchangeable opinions.

One of Cicero’s quotes contains an interesting question.

“I don’t understand what the man who is happy wants in order to be happier.”

You could call this tendency to accumulate better and better things, “happiness greed.”

Cicero’s observation is astute. It seems like human beings are destined to be unsatisfied with what they have. Even achieving happiness isn’t enough. Paradoxically, this condemns you to live with your unhappiness forever.

Friendship is one of the most common themes in the philosopher Cicero’s work. It’s clear that it was one of the great treasures of his life. That’s why he tended to write and reflect on it so much.

One of his quotes says:

“Friendship arises from nature as such, rather than from some neediness: from the application of the mind, along with a kind of love, rather than from thinking about how much advantage the relationships might bring.”

That means that there is a big difference between true friends and those who are just trying to get something from you, or those who reinforce your bad behavior.

4. The power of public speaking

They say that Cicero’s public speaking abilities were extraordinary. The story goes that during a trial when Cicero was the lawyer, the accused sent himself into exile voluntarily after hearing the philosopher’s impressive arguments.

That being said, Cicero himself is critical of public speaking. He says:

“Nothing is so unbelievable that oratory cannot make it acceptable.”

In other words, a good speaker can make their audience believe just about anything.

Even though Marcus Tullius Cicero was in the army for more than three years, he was always convinced that peace was an important value and that ultimate authority was the law. He saw armed clashes as the worst possible part of humanity.

One of his quotes says:

“I prefer the most unfair peace to the most righteous war.”

Some of the top world leaders have used this quote to garner support. Cicero defended peace and believed that no matter how imperfect peace was, it was still better than war.

This is another Cicero quote that is still popular today. It says:

“Men are like wine: age sours the bad and improves the good.”

This is a beautiful and accurate analogy. The message is that time brings out people’s true character. It is a nice way of thinking about aging, as a purifying process rather than a process of decay.

This is one of those quotes that is universal and timeless. It talks about the value of truth. It says:

“Truth is corrupted as much by lies as by silence.”

This is a brilliant quote because it deals with an indisputable reality. Your responsibility for the truth isn’t limited to not telling or repeating lies. It also has to do with speaking out if you witness injustice.

Like many of his contemporaries, the philosopher Cicero was persecuted on many occasions because of the political mess that was the Roman Empire. In the end, they declared him an enemy of the state and executed him. Nevertheless, his wisdom and legacy live on forever through his work.

A Journey to the Heart of Philosophy
Thales of Miletus is considered by many to be the father of philosophy. Read more »
Link copied!
Interesting Articles
Cinema, Television, and Psychology
The Sixth Sense: Overcoming Fear and Anxiety

Drug-free treatment for mental illness is an option that's always been on the table. However, it became a utopia during…