Dichotomous Thinking and the Authoritarian Personality

Either you do as I say or you're against me. What I say and think is the only truth there is, the rest is untrue or nonsense. This type of reasoning perfectly defines an authoritarian person, whose life is ruled by dichotomous thinking and rigidity. 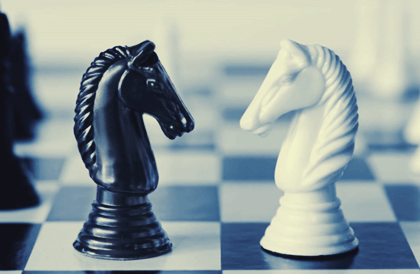 Dichotomous thinking defines people who construct their reality based on very rigid categories. For them, everything is black or white, good or bad. Either you’re on their side or you’re against them. This tendency to evaluate things using such extreme or polarized perspectives often defines a clearly authoritarian person who’ll be very difficult to live with.

Absolute terms aren’t as widespread as you’d think in our social universe. This is the first thing we have to understand.

Experience always ends up showing us, for example, that absolute happiness is never possible. Human beings are never completely good, and never completely evil. Human reality is a complex and changing one, full of nuances. If you can accept this variability, you’re on the right road to well-being and intelligence.

However, some people insist that everything around them has to conform to a rigid and stable pattern. They like things as simple as possible in order to keep everything under control.

This dichotomous approach is the origin of many different prejudices and biases that build the most harmful stereotypes. Psychologists Theodor Adorno and Max Horkheimer told us about this in their day.

However, it’s worth reflecting on the following fact: dichotomous thinking is combated by encouraging critical and flexible thinking. Sadly, this isn’t always applied in schools or taught at home.

“He who thinks little, errs much.”

Dichotomous thinking and the primitive mind

Dichotomous, or black and white, thinking is harmful and should be obsolete. It’s the remnant of a past where false and clearly biased dichotomies abounded (some races superior to others, one gender stronger than another, etc.). However, the field of social psychology points out to us that this type of cognitive approach is much more common than we’d think.

It may come as a surprise to some but, in a way, thinking in absolute terms is much easier. Why? Because it requires no effort, and, because of that, many people apply this way of thinking without even realizing it.

They do so when they see things in terms of good or bad, right or wrong, without appreciating the nuances in between. However, if they thought a little more, and used a good dose of empathy, then they’d see a broader and richer reality.

We should note that psychologists such as Aaron T. Beck defined this type of reasoning as “primitive and immature thinking” back in the 1960s. Thus, according to the father of cognitive therapy, whoever thinks in absolute terms, and applies this type of bias, is making use of very rigid types of mental processes. They’re the following:

Aaron T. Beck also showed that this type of mental focus isn’t, in itself, indicative of any mental disorder. However, dichotomous thinking is sometimes combined with other symptoms to form clinical conditions such as borderline personality disorder.

On the other hand, where a mental disorder is often present is in authoritarian behavior. These days, we even have a scale to measure dichotomous thinking. Through studies, such as the one conducted by Dr. Atkushi Oshio from the University of Tokyo, we discover the intimate relationship between authoritarianism and “black and white thinking”.

The need to train our cognitive flexibility

To reverse dichotomous thinking, we must promote cognitive flexibility from a very early age. This executive function would allow us, among other things, to have greater problem-solving abilities. After all, something that the rigid and authoritarian personality doesn’t accept is contradiction. However, if there’s one thing that abounds in our daily reality, it’s complexity and variability.

Therefore, being able to accept this wealth of stimuli and information from a more open, respectful, and flexible standpoint would enrich us much more as human beings. Taking into account other points of view is synonymous with empathy and intelligence.

In addition, flexible thinking, as opposed to dichotomous and rigid thinking, shapes a lifestyle that can adapt much better to the complexities of human life.

If you put these ideas into practice, then you’ll feel less frustrated and you’ll be more creative and tolerant. You’ll be prepared to analyze, value, and connect much better with everything around you.

Why don’t you try to apply this approach in your daily life and fight those authoritarian ideas that are determined to create a world to suit them?

7 Characteristics of Authoritarian People, According to Psychology
Authoritarian people cast a long, menacing shadow over our lives. Whether in the family, at work, or in politics, you know it when you see it, by their use and abuse of power. Read more »
Link copied!
Interesting Articles
Personality Psychology
5 Psychological Mechanisms that Allow People to Hurt Others