Description and Characteristics of the Frontal Lobe

The nervous system (NS) is a very complex network of neurons and glial cells that will ultimately determine your behavior, thoughts, and emotions. In order to fulfill their function, these nervous units group into larger structures, and each of these groupings contributes to this complex machinery. One of the most notable structures of the SN is the brain, which is divided into a series of substructures called lobes; the frontal lobe among them. 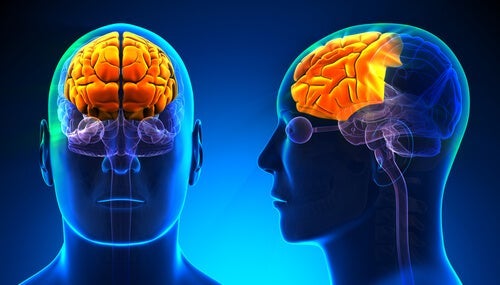 Today’s article is about the frontal lobe. Before we begin, you must know that that lobes separate by the division of the cerebral cortex. This division happens according to the role each of these plays in the different processes and their location. For instance, the lobes would be sort of like continents if the brain was the Earth.

This classification is quite functional, as it serves as a map to easily locate certain points along with the brain. The cerebral cortex has six functional lobes: frontal, parietal, occipital, temporal, insular, and limbic. The frontal lobe occupies one-third of the cerebral cortex.

“Biology gives you a brain. Life turns it into a mind.”

Structure and functions of the frontal lobe

The frontal lobe is in the most anterior part of the brain, specifically the entire cerebral cortex starting from the central sulcus. It’s an important part because it performs central functions in information processing. Some particularly relevant ones are those with an executive character. It divides into multiple regions that provide it with a great variety of functions.

One can speak of two large territories when grouping the different functional structures of the lobe. One of them is the territory corresponding to the motor cortex, which fulfills motor functions. The other territory is the prefrontal cortex, which is in charge of executive processes, decision making, and different things related to emotion regulation.

Arendo, Bembibre, and Triviño (2012) highlight the importance of the frontal lobe, stating it connects to practically all areas of the brain. The authors report that this area processes “information of a cognitive, motivational, and emotional nature and use it to drive the individual’s behavior towards the achievement of their goals”. Thus, you’re able to design plans, select them, and coordinate the best cognitive strategies to carry them out thanks to your frontal lobe.

The motor cortex of the frontal lobe

This is the manager of the body’s effector systems. Thanks to it, you can perform all types of voluntary motor acts. This structure is in charge of both planning the movement and transmitting the orders to the muscles so that they can start. Furthermore, note that this cortex is only in charge of voluntary movements. In fact, the involuntary motor system is present in other structures, such as the basal ganglia and the cerebellum.

There are three areas of relevant mention within the motor cortex:

This region contains the executive system and information processor of the human brain. The prefrontal cortex of the frontal lobe is ultimately responsible for cognition, behavior, and emotional response. It mediates between many other structures throughout the brain, playing a key role in decision-making.

It isn’t superfluous to explain that executive functions are a set of higher-order cognitive abilities, which control human behavior and emotions. In other words, one could describe all those processes in charge of managing, organizing, coordinating, and directing as similar to a computer processor.

Finally, the frontal lobe is one of the most relevant structures within the brain. Its study through various neuroscientific techniques provides valuable information: understanding its structure and functionality brings humans closer to understanding our biology and gives clues about its relationship to behaviors, emotions, and thoughts.

Glial Cells: The Functional Basis of the Brain
The brain is a complex organ made up of several types of cells. Among the most important are glial cells, which are key to brain function. Read more »
Link copied!
Interesting Articles
Brain
Seven Situations that Change Your Brain, For Better or Worse