Depression: When Darkness Looms Over Us 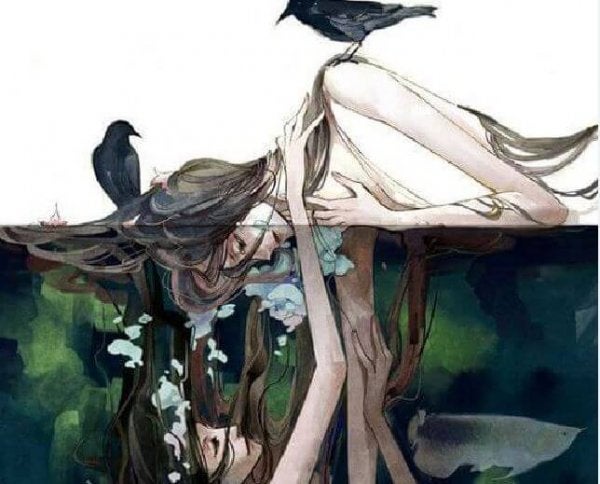 Depression is a pain that grips us and becomes our shadow. Many times it comes accompanied by its dangerous friend: anxiety. They generate fear within us and cloud our emotions. They generate harmful thoughts and undermine or belittle our self-concept, making dents in our self-esteem.

Our mood depends a great deal on what we tell ourselves and how we behave. That is to say, our thoughts, feelings and actions are involved in a sort of feedback. In a way, they dictate our general well-being.

As we will now see, it is rare to maintain a healthy state of mind at all times. Anxiety of depression is not the only consequence of having a pattern of harmful thoughts, feelings and behaviors. Instead, there is an ample and varied range of disorders and illnesses within which one can fall.

There is a metaphor that is very commonly used in contextual therapy. It can help us comprehend the importance of the personality triangle composed of our thoughts, feelings and behaviors. Let’s take a look at it and pay very close attention:

“Imagine that you are the driver of a bus filled with many passengers. The passengers are thoughts, feelings, memories and all of the things we have in our lives. It is a bus with only one single door to get in, and it only has an entrance. Some of the passengers are very unpleasant and dangerous-looking.

While you drive the bus, some of the passengers start threatening you. They start telling you what you have to do, where you have to go. Now turn to the right, now go faster, etc. They even insult and wear you down. You’re a bad driver, a failure, nobody loves you… You feel awful and do almost everything they ask you to, just so they will shut up. Just so they’ll go to the back of the bus for a while and let you drive in peace.

But one day you grow tired of their threats and want to throw them all off the bus, but you can’t. So, you confront them. Without even realizing it, the first thing you do is stop and leave aside your task of driving. Now the bus isn’t going anywhere. And also, the passengers are very strong. They resist, and you can’t manage to get them off the bus. So, you give up, go back to your seat and drive to where they tell you to in order to placate them.

This way, in order for them not to bother you and so you won’t feel badly with yourself, you start doing everything they ask and drive the bus where they command in order to not have to fight with or even look at them. You do what they say, and quicker every time, thinking about getting them out of your life. Very soon, almost without noticing, they won’t even have to tell you to turn left. You will turn to the left in order to avoid having the passengers throw themselves over you and threaten you.

This way- it won’t take long- you’ll start to justify your actions. You’ll start to almost believe that they are no longer on the bus. You try to convince yourself that you are driving the bus down the only possible direction. The power of these passengers is based on threats. “If you don’t do what we say, we will appear and make you look at us. Make you feel awful”. But that is all they can do.

It is true that when these passengers arrive, very negative thoughts and feelings, it seems like they can do a lot of harm. And that’s why you accept their ways and do what they tell you to. You do it all in order to get them to leave you alone. In order to get them to go to the back of the bus where you can’t see them.

In trying to keep your passengers in control, you have actually lost control of the bus! They aren’t steering, nor are they managing the accelerator or the brakes. They also don’t control where you make your bus stops. You are the driver. Don’t let your passengers make those decisions for you.”

Millions of people around the world struggle with anxiety and depression. Yet, despite this fact, we don’t have as strong an understanding of these disorders as we should. We often have to deal with a enormous taboo around the topic and the people that deal with it.

That’s why the artist Nick Selcuk tried to capture the difficulty of dealing with these pathologies in a comic strip. It is about the dark reality that someone who suffers from anxiety and depression has to endure.

We must be clear on the fact that dealing with these problems is not a piece of cake. It is also not a choice nor is it a sign of weakness. Therefore, in this sense, we should always keep in mind the following points about depression and anxiety:

We should eliminate the concept of people with anxiety and depression problems as vulnerable and weak individuals. We need to stop thinking that we are the guilty ones.

People with these problems require affection and comprehension. They require an opportunity to contact a professional. Thus, they can manage the emotional dysfunctions that haunt them with coherence and grace.

Link copied!
Interesting Articles
Theories
Systems Psychology: What Is it All About?

Psychology
Once There Was A Princess Who Saved Herself