What Do You Know about Dependent Personality Disorder? 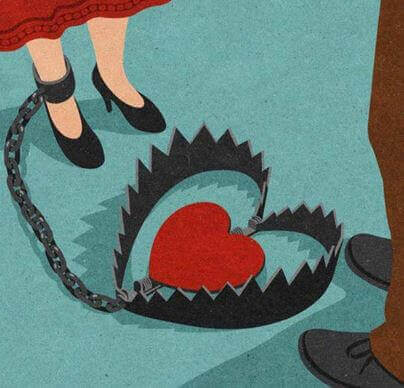 Dependent personality disorder is mainly characterized by the persistent and excessive need to receive care. This entails behavior characterized by submission and attachment, as well as a deep fear of abandonment and the consequent anxiety about separation.

How many times have we met people who can’t seem to leave their partner, even knowing that the relationship is harmful and doing them more bad than good?

How many people do we know who are incapable of making decisions without other people’s opinions? Who doesn’t know someone who needs so much that it’s exhausting?

Well, these people may be suffering from a dependent personality disorder (although not necessarily, of course).

But first of all, what exactly is this personality? What are we talking about when we say “personality”? Let’s take this as a starting point and then dive into dependent personality disorder.

Personality is a complex organization of cognitive processes, emotions and behaviors that orient us and give us guidelines (coherence) to our life. Like the body, the personality is made up structures and processes that reflect both nature (genes) and nurture (experience). In addition, personality encompasses the effects of the past, including memories, as well as instructions for the present and the future.
In other words, personality is a set of characteristics or patterns that define a person. A particular order of feelings, thoughts, attitudes and behaviors that we have and that make us unique.

What is dependent personality disorder?

Now that we know more or less what personality is and how psychology defines it, we can address one of its alterations or disorders.

As we said before, dependent personality disorder is mainly characterized by a dominant and excessive need to be cared for, which leads to submissive behavior, exaggerated attachment, and fear of separation.

It begins in the early stages of adulthood and is seen in various contexts (work, family, leisure, etc.).

The following are its most important characteristics:

Fear of not knowing how to take care of oneself

This pattern begins in adulthood and appears in a variety of contexts. Dependency and submissive behaviors are designed to obtain care. These people have the firm belief that they are unable to function properly without the help of others.

People with dependent personality disorder have great difficulty making everyday decisions. Picking out an outfit, whether to take an umbrella… these are hard decision for them. They’ll need an excessive amount of advice and approval from others.

These individuals tend to be passive and allow other people to take the initiative and responsibility for most of their lives. You might think this only happens to young people. However, it also happens to older adults.

Adults with dependent personality disorder usually depend on a parent or spouse to decide where they should live, what kind of work they should do, and who they should be friends with.

This need for others to take responsibility is excessive for their age. It also exceeds what would be appropriate to need in these situations.

Fear of losing relationships with others

Because people with dependent personality disorder fear losing support or approval from others, they often have trouble expressing disagreement. This is especially true with those on whom they depend.

These individuals feel so incapable of functioning alone that they may agree to things they think are wrong. They won’t risk losing help.

These people also don’t show their anger towards the people they receive support from out of a fear of pushing them away.

People with dependent personality disorder have difficulty initiating projects or doing things independently. They lack confidence in themselves and believe they need help to start and carry out tasks.

They will wait for other people to start things because they believe that others can do better. These people are convinced that they are unable to function independently.

They feel inept and have a constant need for help. However, they tend to function properly if they are assured that someone will supervise and look everything over.

They may be afraid to appear competent: they think that adding competence to the image they project will lead to abandonment. They often don’t learn the skills to need to live autonomously, thus perpetuating dependency.

Doing anything to be cared for

People with dependent personality disorder can go to extremes to get care and support from others. They may even volunteer for unpleasant tasks if that behavior gives them the care they need.

They are willing to give themselves over to what others want, even if the requests are not reasonable. Their need to maintain the relationship results in unbalanced or distorted relationships.

In this sense, they may sacrifice themselves in extraordinary ways or tolerate verbal, physical or sexual abuse. They feel uncomfortable or helpless when they’re alone.

People with dependent personality disorder will “stick” to significant people just to avoid being alone, even if they don’t really want to.

When a relationship ends (for example, the caregiver’s death, a breakup, etc.), they may urgently seek another relationship to provide them the care and support they need.

Their belief that they are unable to function without a close relationship motivates these people to bond quickly and indiscriminately to another individual.

Concern about having to take care of themselves by themselves

These fears have to be excessive and unrealistic. For example, an elderly man with cancer, who moves into his son’s house to receive care, is displaying dependent behavior that is appropriate given the circumstances of his life.

People with dependent personality disorder are often characterized by pessimism and doubt. They tend to belittle their abilities and resources, and may constantly refer to themselves as “useless”.

They take criticism and disapproval as proof of their lack of courage and then lose faith in themselves. These people look for overprotection and domination from others.

Work performance may be affected when initiative and autonomy are required. They tend to avoid positions of responsibility and feel anxious when faced with decision-making.

Social relationships tend to be limited to the few people they are dependent on. There is an increased risk of depressive disorders, anxiety disorders and adaptation disorders.

Chronic physical conditions or separation anxiety disorder in childhood or adolescence predispose a person to this disorder.

Who is affected and what causes dependent personality disorder?

Women get psychological help for this problem more often, although some studies indicate that it occurs in men just as much as women.

On the other hand, there are a number of factors that can contribute to the development of this disorder.

A person with dependent personality disorder reacts by increasing their appeasement and submission, anxiously and urgently seeking a relationship for care and support.

Borderline personality disorder is distinguished by a typical pattern of unstable and intense interpersonal relationships.

Both dependent and the avoidant personality disorders present feelings of ineptitude, hypersensitivity to criticism and the need for security.

However, individuals with avoidant personality disorder have a strong fear of humiliation and rejection. To the point that they distance themselves until they are sure they will be accepted.

In contrast, people with dependent personality disorder display a pattern of seeking and maintaining relationships with others, rather than avoiding and leaving them.

Not all dependent people have a disorder

Only when these traits are inflexible, unable to adapt, and persistent, and cause significant functional impairment or subjective discomfort, do they constitute a dependent personality disorder.

Self-Esteem and Emotional Dependence
We like to please and share things with others. But can the need for approval be harmful? Yes - in fact, it's one of the causes of emotional dependence. Read more »
Link copied!
Interesting Articles
Psychology
The Motor Cortex: Characteristics and Functions

Our brain allows us to plan, eat, run, and even smile. It’s through the complex but fascinating functions of the…

Psychology
Creativity: A Plant We Must Tend

Creativity: a word we have heard so many times before. A word that everyone uses so frequently, whether they are…

It talks, it whispers, it yells… It expresses itself however it can, or however we let it, sometimes. Being aware…

Sometimes life hits you with really heavy blows. Life's not always light and colorful, but you still have to keep on…

Abuse always leaves deep scars, and they're sometimes impossible to erase. The psychological effects of domestic abuse in particular tend to…