Demeter is the goddess of agriculture, the cycles of life and death, and the fields' fertility. 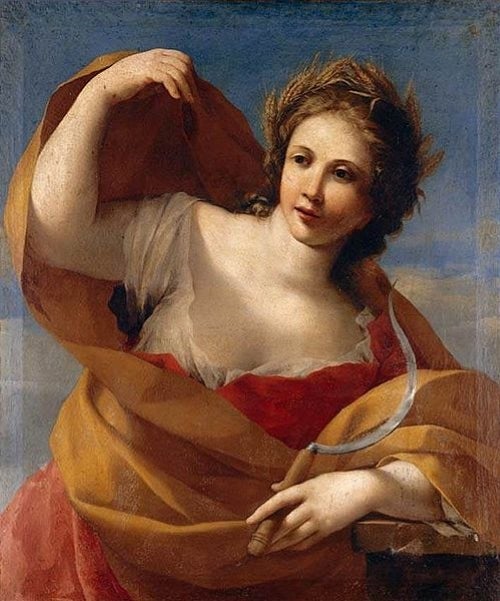 Demeter was the protector of grains, harvests, and fertility of the soils. She was the keeper of marriages, sacred law, and the cycles of life and death. Daughter of Chronos, the father of time, and Rhea, the universal mother. Her grandparents where Uranus and Gaia. She was part of the main gods in Olympus.

In Greek mythology, Demeter is represented as a gorgeous blonde woman. She had a daughter, Persephone, with her brother Zeus. However, other versions of her myth mention that Jason, nephew of Zeus and Electra, is her daughter’s father. Be that as it may, she gave birth to a beautiful and captivating baby girl.

“And could sculpt like men, then the horses would draw their gods
Like horses, and cattle like cattle; and each they would shape
Bodies of gods in the likeness, each kind, of their own.“

Demeter and her daughter Persephone

Demeter loved her daughter Persephone deeply. Persephone would run around the fields, filling them with life. Hades, the god of the Underworld, saw her one day and fell in love. Secretly, Zeus gave Persephone away to Hades, without her or her mother knowing.

One day, Persephone ran around the fields, as she always did. She was around Sicily, picking flowers with her friends, Oceanus’ daughters. Suddenly, the earth shook and Hades came out of the Underworld and took Persephone with him. She called for her mother, but it was useless.

When Demeter found out, she was furious and turned Oceanus’ daughters to mermaids. She wanted to punish them for failing to protect Persephone. Then, Demeter walked the Earth for nine days, looking for her daughter. She didn’t eat nor drink and cried helplessly.

After nine days, Hecate, goddess of magic and witchcraft, heard her cries. She took Demeter to Helios, the Sun-god, who could see and know everything. Helios told Demeter that her daughter was in the Underworld.

Desperate, Demeter decided to leave Olympus and roam the Earth. She didn’t know how to get to the Underworld. She disguised herself as an old lady who arrived at Eleusis and sat by a well. King Celeus’ and Queen Metanira’s daughters got there to get water and found the goddess. Demeter decided to lie.

She told them she was from Crete and that some pirates had kidnapped and then liberated her. She said she could do housework and King Celeus took her in as his son Demophon’s nanny. Demeter took a liking to the boy and wanted to make him immortal. To do this, she had to do some rites, such as burning his skin in a bonfire.

The Queen saw her doing the ritual and panicked. Demeter decided to come clean. She didn’t manage to give the child immortality, but she taught him about agriculture and he shared it with the townsfolk.

While Demeter was looking for her daughter, she forgot about her duties as protector of harvests and the soil became sterile. Nothing grew and men were starving. Worried by this, Zeus decided to make a deal with Hades.

Demeter asked to worship Eleusis, the place that gave her a warm welcome. The cult was a secret and none of its members could reveal it. One of the priestesses was tortured to death, but she remained quiet.

After hearing of this, Demeter sent a plague to that place and bees came out of the priestess’ body, the queens of fertility in the fields.

Choosing a Type in Emotional Dependence
It can be frustrating and painful to think you're unlucky in love. However, choosing a type of person doesn't happen by chance. Read more »

Some people say that there are certain situations that change you completely. For example, having someone use and take advantage…

I want to play a game. A game that involves shouting, but not pain. A game that uses toys, but not for torture. Remember, this is a game where both…