Crimson Peak is a film that brings together countless elements from the world of terror. Elements that have their origin in the Gothic narrative and romanticism, and that have evolved into dark areas. in which the world beyond seems to be more alive than ever. However, in Crimson Peak, the terror resides in human passions. 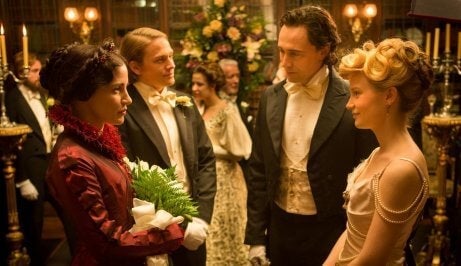 For all those who are familiar with Guillermo del Toro’s films, a film like Crimson Peak (2015) won’t surprise them. The director makes his intentions clear from the start: he wants to vindicate monsters. Extraordinary beings, ghosts, and monsters make up this film from the Mexican director. However, they aren’t portrayed as fearsome or vengeful.

Their appearance may be frightening, but it’s nothing more than that – their appearance. True monsters live with us daily, inhabit our cities, and can dress up in the best clothes around.

Del Toro drinks from the influences of horror films, gothic novels, and all those elements from the past that never seem to have gone away. However, that being said, it isn’t a film that seeks to scare the viewer or, at least, not through the supernatural.

The critics had very different opinions. Some highlighted the film’s magical atmosphere, but others felt the film was rather lightweight. The public wasn’t so benevolent, and, although the film was acceptable to many, it didn’t really shine completely.

Perhaps the problem was that many expected to see a film about haunted mansions plagued with scares, as they would in the traditional films of this genre. And the truth is that Crimson Peak follows all the conventions of terror to the letter. Yet, it reinvents them and gives us new perspectives.

The scares aren’t caused by the ghosts, the horror doesn’t come from the world beyond. The true terrors are found in the world of the living, in raw chilling human passions.

Del Toro joins the tradition of exploring the depths of the human mind – the secrets and mysteries that surround an already decaying society.

In a dark somber mansion that seems to take on a life of its own, breathing and even bleeding, Crimson Peak gathers all the characteristics of the Mexican filmmaker to devise a story that could easily be inspired by a Romantic novel.

The story begins in late 19th century New York, and centers around Edith, the young daughter of an important businessman. She isn’t a conventional woman and doesn’t fit into the mold of her time.

Edith aspires to become a writer, but she doesn’t want to write those typical comedies and romantic dramas that women always seem to write. She’s far more attracted to the stories that have haunted her since her childhood: ghost stories. Edith has always believed in ghosts. She’s even seen them and is convinced that they won’t hurt her.

Del Toro has always included a strong presence of women in his films, but not for the secondary roles, the typical “dames in distress”. Instead, he gives them the main roles – strong characters who are in control of their lives and their destinies. To highlight this, Edith is destined to confront her father head-on when she meets Sir Thomas, a young British man she falls in love with.

Crimson Peak mocks 19th-century high society conventions, laughs at the morals of the time, and presents us with a young woman who’d fit in perfectly well in modern societies. The film’s description of high society, with its light but effective criticism, is linked to the gender roles and marriages of convenience of the time. In a strange way, it reminds us of Jane Austen’s literature.

After her father’s death, Edith traveled to England with Sir Thomas, stopping at his family home, Allerdale Hall. In Allerdale, they live together with Lucille, Sir Thomas’s rather strange sister. Both he and Lucille planned on restoring the splendor of their ruined mansion.

Allerdale Hall was once a place that shone brightly, a prosperous place where Thomas and Lucille’s wealthy and aristocratic family lived. However, there was little remaining from years past, just a sad facade.

The interior of the house is absolutely freezing, the ruined walls have made the roof collapse, and the wind seems to whisper from the beyond. The house even seems to come to life, its floors seep with blood, and its walls breathe.

The red clay that Sir Thomas hoped to make use of stains the snow the color red. Edith will have to get used to this new life, and to a house that seems to shout at her to get out, and to flee as far away as possible.

Right from the beginning, we can see that something strange is happening with Lucille and Sir Thomas. However, the intrigue isn’t like detectives searching for a murderer or a ghost.

The ghosts appear on screen throughout the film, they guide Edith and communicate with her. The intrigue lies in the passions, the complexity, and the dark past of the brother and sister. Power, ambition, love, incest, life, and death. All of them come together in Crimson Peak.

The two women have the most powerful on-screen presence, especially Lucille. She truly shines, thanks to Jessica Chastain’s wonderful interpretation. Metaphors abound from the beginning, and colors take on special importance. The crimson red of Lucille’s dress contrasts with the paleness of Edith’s.

The passions all come through that color: the crimson red, the color of blood, the forbidden, and eroticism. In turn, the green tones of the surroundings evoke the obscene impurity of the place.

Horror merges with love in Crimson Peak. Nothing is more frightening than human passions; nothing terrifies more than an obsessed madman in love. Incest hides behind the walls of Allerdale Hall; the past has been tortured and it can’t tear itself from that sinister place.

Edith travels through infinite corridors, enters a frightening elevator, and descends to hell, to the place where everything began, and where blood emanates from the walls.

The film is almost metaphorical; the house itself is a parallelism with the passions that end up destroying human beings, leading them through paths of violence, anger, and desire. Love, eroticism, and violence seem to go hand in hand.

And, curiously, the plot moves away from the fear produced by the ghosts and presents them to us as friends and allies.

This violent love-triangle of the three main characters reminds us clearly of the literature of Romanticism, but also of Agatha Christie’s crimes of passion. In the same way, you can also feel Hitchcock’s influence right from the start of the film.

Thus, this film takes all the influences of the director, regroups them, and then puts them back together to tell a story of haunted houses and devastating passions. The violence isn’t disturbing; it’s aesthetic. The blood blends into the snow almost poetically.

This probably isn’t the Mexican director’s best film, and is nowhere near as good as others like Pan’s Labyrinth. However, Del Toro captured what he wanted and managed to blend magic and fantasy and create a Gothic horror film.

In a world where we can no longer believe in fairies, Crimson Peak brings us a dose of nostalgia and romanticism. But together with this novel approach, Edith takes the reins of a story that, if it had been written in the XIX century, would have starred a man.

Del Toro created an entertaining and involving film, which captured the tragedy of a place in absolute decadence.

Dealing With Fear: The Horror Movies You Play in Your Head
We feed our fear unconsciously. If it paralyzes you, you should learn how to get rif of all those horror movies you constantly play in your head. Read on! Read more »
Link copied!
Interesting Articles
Cinema, Television, and Psychology
The Sea Inside: When Life is an Obligation