These days, it's really easy to create a false identity on social networks of the person we would love to be but aren't. But it's time to get real! 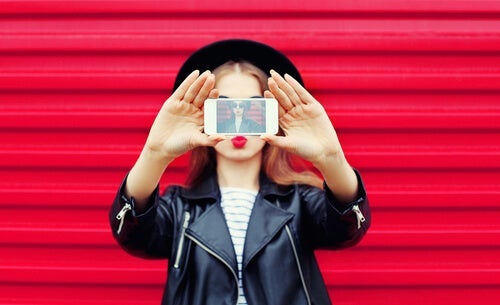 The virtual world is an area that invites you to create a character to interact with others. Attention-seeking on social networks is the daily bread for many people these days. These networks are places where people put on a show and play the role of the person they’d like to be.

The opposite of the virtual world isn’t the real world, but rather the present world we live in. On the Internet, you don’t often see what people are really like. In one way or another, everyone is free to hide what they don’t want people to see and only show them what they want. This also occurs in our physical lives but not to such a great extent as online. Almost anything can be shown off on social networks.

Thus, something that could, in principle, be imaginative and fun, can easily become quite a problematic issue. This can occur when you want to show that you’re a certain type of person on social networks. You start to base yourself on that person and end up confused about your real identity.

Our false identity on social networks

It’s easy to create a false identity on social networks. You can say anything to other people you find there, and all in real-time. However, that person has no way of verifying if what you’re saying is true. The same goes for everything you post online.

It’s one thing to put on a front on social networks, but something entirely different to do it in the real world. Virtual reality doesn’t let you access a person’s real situation and see what they’re really like. Nor does it allow you to effectively contrast what someone says with your own perception of who they really are.

All the ideal conditions are there for you to be extremely flexible about your true identity. You don’t realize it, but you end up creating and showcasing a character that represents your ideal self. Once you’ve created that false image of yourself, you start to cultivate, promote, and embellish it.

The identity you build on your social networks always showcases the “best” of you. You receive feedback on each post you make. Some get a lot of “likes”, but others pass by unnoticed. You gradually learn what aspects of your identity are most admired and approved of by all your online “friendships”.

Putting on a front and creating a false identity on social networks is also a way of competing with others on the “social market”. Some people are so absorbed in their virtual world that they also start judging those around them. In this way, they can forge some artificial, yet fragile bonds.

The approval and admiration professed on social networks don’t often arise from genuine recognition. It has to do more with getting as many likes and followers as you can.

Many Internet celebrities, commonly known as influencers, stem from all of this. They’re the ones that are quoted the most in that “personality market”. Based on what they say, they’re either replaced or endorsed on a daily basis.

Self-deception is the real problem

Social networks are made to generate profits. In themselves, they’re neither good nor bad. However, they’re a fertile ground where people can increase the effect of peer pressure and consolidate “trends” that aren’t always constructive or enriching for people or society.

They’re also places where people often trivialize the things that are truly relevant. On a daily basis, it’s plain to see that they separate more than they unite. They encourage a micro-dictatorship of opinion, and for people who aren’t self-confident enough to form an independent approach to reality, this will lead to the creation of deceptive and even fraudulent identities.

Social networks are also places that can easily condition us. Showcasing yourself and creating a false identity on social networks can become something that creates more expectations and feelings than they should. Some people find it so frustrating when they post something and it passes by unnoticed.

And yet here we have a great and ironic contradiction. By doing this, you actually isolate yourself from your true surroundings and from your true identity.

Making comments and sharing things on these networks are just other ways to establish links with others. If you allow yourself to become too absorbed on social networks, then you’ll just end up distorting who you really are and rejecting the valuable opportunity of building deeper friendships and expressing your true self.

How Social Networks Affect Our Self-Esteem
Social networks affects our self-esteem in many ways. In this article, we'll explore some negative consequences of too much social media. Read more »
Link copied!
Interesting Articles
Self-esteem
The 4 most Common Self-Esteem Issues

Our experiences form and develop our self-esteem, whether positively or negatively. The value we assign to ourselves and features that…

Self-esteem
Self-Esteem and HIV: Going Beyond the Stigma

Self-esteem is a key factor in psychological well-being and health. However, there are specific groups that, due to a certain…

Your self-esteem should not neglected or left in anybody else's hands. Yet in today's world we feel such a need…

Self-esteem
How to Speak Confidently: The Power of Confidence in Yourself

Many people ask themselves how they can speak confidently. How can you express your ideas with that perfect blend of…