Color blindness is a visual disturbance that causes people to confuse colors or perceive them in an abnormal way. Why does this happen? How does it affect people's daily life? Read on to discover the answers! 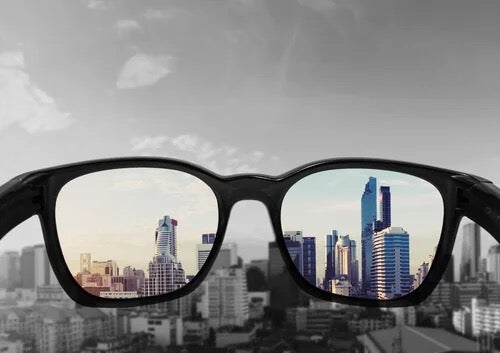 Color blindness, or Daltonism, was named after John Dalton, an English chemist who was the first to publish a study on the subject in 1798. In fact, he was color blind himself.

The retina is a light-sensitive layer of tissue at the back of the eye onto which images are projected. Photoreceptors are located in the retina. There are two types of photoreceptors: rods and cones.

Rods are cells that specialize in perceiving the contrast of images. In fact, they show the world to you in black and white. Cones are responsible for your color vision. They achieve this by responding to electromagnetic waves of different frequencies.

There are three types of cones:

The photoreceptors are located in the central part of the retina. This is called the fovea. The fovea is the area that receives the most luminosity and allows sharp central vision. There are no rod cells in the fovea. In fact, they’re located outside of it. The middle area is a mixture of rod and cone cells.

The accumulation of the three types of cone cells is what makes it possible for you to see thousands of colors.

As we mentioned above, in color blindness, a genetic mutation leads to either a lack of certain cones or malfunctions. Depending on the cone affected, different types of color blindness occurs.

Living in a world of color is nothing new. However, advances in technology mean that color plays an even more important role in people’s daily life.

In fact, if you’re color blind, you probably had to adapt to a colorless world. You might use certain strategies to help, but you’ll probably still face a multitude of difficulties that non-color-blind people couldn’t even begin to imagine. For example, at work or school, the colors red and green are used to correct documents. In addition, subway lines are divided by colors. Then, of course, there are traffic lights, which basically consist of either red or green lights.

In fact, the authorities sometimes impose these kinds of limitations. For example, you can’t get a driver’s license in Brazil if you’re color blind.

Hope for the future

However, experts are continually developing devices and making adaptations to help those affected. For example, installing traffic lights that also use shapes or symbols. Furthermore, glasses or lenses to correct that could correct chromatic deficiencies.

In 2008, the Non-Anonymous Colour-Blind People Association (ASDNA in Spanish) was formed. It launches awareness campaigns. Furthermore, in 2010, Portuguese designer Ashoka Miguel Neiva presented a color identification system called ColorAdd. This system is based on five symbols that correspond to the colors red, blue, green, white, and black. These symbols can be combined to create many other colors too.

The goal is for this system to be applied in other areas, such as education, health, and transportation. For example, textbooks could be marked with symbols, as well as road signs and hospital signs. In fact, there are even plans to include board games, clothing, and make-up in this particular system.

Occipital Lobe: Structure and Functions
The occipital lobe is located in the posterior area of the cerebral cortex. Learn all about this interesting part of the brain here! Read more »
Link copied!
Interesting Articles
Illnesses
Surviving Cancer and What Happens Next