Color Vision in Humans - How Does It Work?

Color vision is an important part of human beings. Being able to tell them apart is, without a doubt, an adaptive operation. So how and why do people perceive colors? 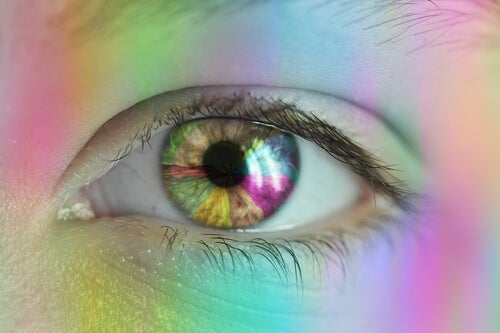 Color vision is a subject as interesting as it is complex. Many people wonder if everyone perceives color in the same way. Have you ever wondered if what you perceive as red might be blue for someone else?

The visual system perceives achromatic (lack of color, anything ranging from white to black) and chromatic surfaces. Color refers to chromatic perception and hue is the proper term to describe a particular one. However, the most widespread and well-known concept is simply color.

The fundamental question, which humans have and continue to ask themselves, is what determines the color you perceive from a visual stimulus. That is, why do we see colors? How do we see them? Various theories address color perception throughout history. You’ll read about the most outstanding ones in today’s article.

“Suffice it to say that black and white are also colors… for their simultaneous contrast is as striking as that of green and red, for instance.”

In 1802, Thomas Young proposed one of the first theories on color vision: the Trichromatic Theory. Hermann von Helmholtz polished it further in 1852. According to this theory, there are three different types of color receptors (cones) and each one of them has a different spectral sensitivity. Furthermore, the color of a stimulus is encoded by the amount and proportion of activity of those receptors.

Similarly, Ewald Hering proposed the theory of the opposing process in 1878. Hering postulated the existence of two types of cells in the visual system to encode color and a further type intended to encode luminosity. His hypothesis revolved around the fact that each cell type encoded the perception of two complementary colors (color pairs that produce white or gray when combined to the same extent).

So what’s the foundation for Hering’s theory? He noted that complementary colors don’t happen together. In the author’s words, “There’s no such thing as bluish yellow or reddish-green”. Another argument that led him to develop his theory was that the post-image produced by staring at the color red is green and vice versa. As well as the post image when looking at the color yellow is blue and vice versa.

Thus, for many years, researchers leaned towards one theory or another. However, over time, they realized that both coding mechanisms coexist in the visual system.

Evidence of both theories

It wasn’t until the early 1970s of the last century that Young’s theory took hold. Thanks to microspectrophotometry (a technique to measure the absorption spectrum of the photopigment that contains a cone), people learned about the existence of three types of cones in the retina in living beings with normal color vision.

At the same time, they discovered that each of these cones contains a different photopigment with its own particular absorption spectrum. Thus, some cones are more sensitive to long wavelengths, others to medium waves, and others to short waves.

Hering, Chatterjee, and Callaway’s Theory (2003) verified the opposite processing of color at all levels of the Retinogeniculostriate pathway. Thanks to this, they discovered there are cells that respond in one direction to color and in the opposite direction to their complementary color in each of them.

Color constancy and the Retinex Theory of color vision

The above theories are lacking an explanation of a fundamental aspect of color perception: the constancy of color. This concept refers to the fact that the color humans perceive of an object isn’t simply a function of the reflected wavelengths.

For example, when you see your room at dawn, the light isn’t the same as it was at noon. Wavelengths change. However, you perceive the same color. The wall of your room may seem more or less dark depending on the light. However, you know its color hasn’t changed.

Thus, color constancy “is the tendency of an object to remain the same color despite large changes in the wavelength of the light it reflects (Pinel, 2012)”. In fact, it provides you with an adaptive function in your ability to distinguish some objects from others. The color would change each time the lighting does if these weren’t so.

This theory by Land (1977) maintains that “the color of an object is determined by its reflectance (the proportion of light of different wavelengths reflected by a surface).”

Following this theory, Hurlbert and Wolf (2004) affirm that “the visual system calculates the reflectance of the surfaces”. This way a person perceives the colors by comparing the light reflected by adjacent-nearby-surfaces in at least three bands of different wavelengths: short, medium, and long.

In other words, the visual system can calculate the wavelengths a surface reflects. It’ll still perceive the same color, despite any changes in lighting. It doesn’t matter if an object receives more or less light, its color won’t change for humans.

Shapely and Hawken (2002) state that Land’s theory is important because it implies the existence of a type of cortical neurons involved in color vision.

As you can see, there’s still a lot to find out despite the many scientific advances in brain function. Researchers continue to find new things and make progress in the field of color vision. Theories evolve and this means some may be discarded and others supplemented while others are completely new.

The Psychology of Color: What Colors Mean and What They Can Do
To speak of the psychology of color is to speak of emotions. It's like a language capable of evoking pleasure, happiness, restlessness, energy. Read more »
Link copied!
Interesting Articles
Theories
The Types of Love According to John Allan Lee