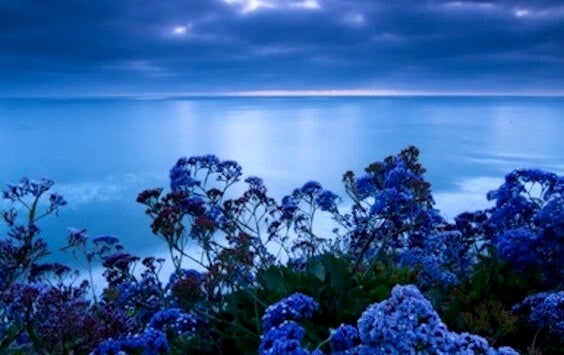 Did you know there is a color that has the power to relieve your stress? It is the color of the sea, the color of a clear sky on a shimmery summer afternoon. It’s blue! The color blue has a natural power to make humans feel relaxed and calm.

Interestingly, although today blue is a popular favorite color, in the past this wasn’t the case at all. Why? Well, it wasn’t seen that much. Beyond the blue of the sky and the seas, it wasn’t common to see it in everyday life before the 12th century (except in Egyptian culture).

“What does it take to be happy? A bit of blue sky over our heads”

That was when, thanks to new chemical and manufacturing techniques, blue went from being a “strange” color to finding its way into religious paintings, coats of arms and other works of art. Overnight, people discovered the psychological and emotional impact of the color blue.

It’s associated with divinity, mysticism, royalty and elegance. Later on, with the arrival of the 18th century and the development of new pigments, a much wider range of blues appeared. With them and research done by Michel Pastoureau, blue became the favorite color of all Western countries.

We’ve spent years studying color psychology — and we’ve seen surprising results. What Newton himself began was then continued by Goethe and later developed by Eva Heller. Today, universities around the world analyze the relationship between color and marketing. One goal is relaxing yet productive work environments.

Experts have been saying for years that the color with the most stress-relieving power is blue. Let’s have fun for a minute. Let’s pretend we’re standing in front of a calm sea, a sea of blue waters blending into the horizon with a sky of the same color. If we reproduce this image well, the calm that will invade us will be immense, comforting, wonderful. And this is what happens in the majority of humans.

Scientists at the University of Granada have shown, in collaboration with the San Rafael of Granada Special Education College, that blue light has a very positive effect on a person who has experienced acute psycho-social stress. (Like from arguments, pressure at work, etc.) In fact, blue is more calming than white.

Also, Eva Heller’s research showed that in classrooms or other environments where blue predominates, the incidence of tantrums or behavioral problems goes down. Its calming effect is undeniable.

The famous stress-relieving color is a favorite of marketers. That’s because experts in neuro-marketing know what it does to our subconscious.

If you think about it, you’ll realize that big airlines use a lot of blue. Calm and trust are of the utmost importance in this industry, which is why you’ll see so much of it on planes and airline branding.

You don’t have to paint your whole house sky blue to have a peaceful home. Actually, if you did, you’d just get used to it and your brain would get overloaded. The key is balance. When you have a bad day, there’s nothing like walking on the beach or laying on the grass and gazing at the immense, beautiful blue sky…

The Psychology of Color: What Colors Mean and What They Can Do
To speak of the psychology of color is to speak of emotions. It's like a language capable of evoking pleasure, happiness, restlessness, energy. Read more »
Link copied!
Interesting Articles
Psychology
Mindfulness for the Unemployed

There have been high unemployment levels for almost a decade. This has made unemployed people feel vulnerable and helpless. As a…

Psychology
Say Goodbye to Your Anxiety With Mindfulness

Psychology
Brain Dominance According to the Herrmann Quadrants: What's Your Type?

Psychology
Have You Heard of Happy Slave Syndrome?

We all know what a slave is; a person whose freedom has been taken away. Just like people who suffer from Stockholm…