Relationships aren't easy and you must keep in mind that there are conflicts in all marital relationships. However, when people become inflexible, then they might fall into dysfunctional or collusive games. 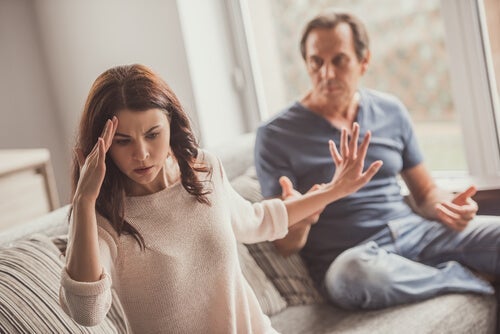 There’s a saying about relationships: “Birds of a feather flock together”. It sort of describes how the choice of people you surround yourself with usually follows unconscious patterns. These are usually derived from the emotional relationship of a person and their parents, especially during childhood. Thus, dysfunctional relationships between parents and children could harm the relationships of the latter in the future and bring about what psychology refers to as collusive games.

In its origin, the concept of collusive games is present in the studies of Austrian psychologist Paul Watzlawick, who applied it in his theory of human communication. A posteriori, psychotherapist Henry V. Dicks, in his work Marital Tensions, introduced the concept of collusion in marital relationships.

However, it was Swiss psychiatrist and psychotherapist Jurg Willi who popularized the term collusion or collusive games in a relationship to refer to involuntary and dysfunctional behavior among its members.

These types of behavior manifest in marital conflicts. In addition, such toxic and unconscious dynamisms bring the two members of the relationship together, per se.

“Some people take refuge in marriage out of fear of being alone.”

According to Willi, collusive behavior forms a “common unconscious” in a relationship. In it, the conflict repeats over and over in a succession of distance or proximity.

The members of a relationship can’t stand separation, but neither intimacy. This leads to them feeling suffocated when they’re together and have separation anxiety when they’re apart.

Thus, the members of a relationship go from being individuals to becoming a hermetic entity in which their individual boundaries overlap and establish toxic behaviors. Thus, one can’t speak of an individual pathology. Instead, there’s a pathology in the relationship.

Collusive polarity in a relationship

In the collusive dyadic dynamics, each member of a relationship manifests a polarized role. That is, each person recreates a function of the division of active-passive, submissive-dominant, and dependent-independent behavior. Tacitly, the assets of one member of the couple lead to inactivity in the other.

In other words, the weak member tends to a regressive and immature attitude and the most active member represents a progressive role or a false maturity. This is because it takes the adult role in regard to the other. Thus, the couple colludes into a vicious defensive cycle.

Collusive games in a relationship usually derive from repressed, similar, and unhealed childhood emotional wounds. Both members need the other for a reciprocal cure of frustrations and unfulfilled desires during their childhood.

Each spouse expects the other to save them from their own internal conflicts. To free them from past fears as well. And to heal the existing wounds of all loving or paternal relationships that weren’t satisfactory as well.

In an attempt to resolve each other’s emotional wounds, they step into the same ineffective patterns and the same difficulties again and again. All to solve their marital and individual problems. However, it leads to pain, disappointment, and mutual blame and fear projection.

There are reprimanding phrases such as “I’m this way because of you”. The paradox of this conjugal situation is that none of the partners truly want to change anything about themselves. Instead, they further emphasize the seriousness of a given situation.

Collusive games in a relationship are traps that maintain toxic mechanisms of guilt, reproaches, and insecurity. In fact, rarely does a couple find itself within an exit door.

Thus, in a marital crisis, one can either remain in a toxic relationship in a collusive way. On the contrary, one may no longer participate in said game and break the marriage entirely.

In another case, there’s also the possibility of going to a therapist. They should be able to guide the members of a relationship to a solution based on the wear and tear they’ve experienced.

However, you can only build love when you abandon expectations and begin to recognize each other as equals.

Forging expectations that are impossible to meet and not taking responsibility for one’s injuries can only lead to frustrations. They, in fact, introduce a couple into the kind of sickly chaos that’s capable of destroying each person’s self-esteem.

You must keep in mind that a couple is the great classroom of love in which one can learn to fall and get up. In addition, you must also learn to develop all that human potential you have inside. But always from the perspective of respect and responsibility of each member.

There’s usually a belief that the success of a couple is staying together forever. However, the secret may be the opposite. In other words, it should only last when it’s healthy.

Romantic Relationships
Loving Someone with Alexithymia