Love is about Action, Not Poetry

How many times have you tried to define love? And how many opportunities are there to think that the definition lacks substance? Today, psychologist Marcelo Ceberio defines love and talks about it. 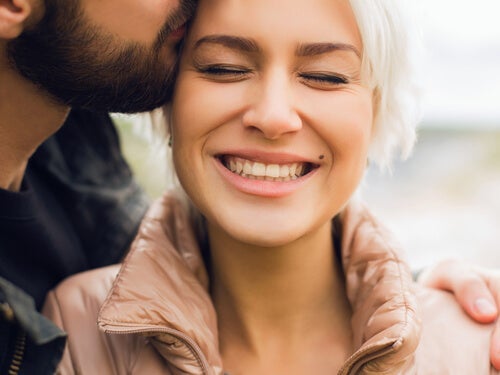 Love is about action. It’s also an abstract concept that’s difficult to define. In fact, people from all walks of life, including poets, psychologists, and even neuroscientists, have tried to “pin it down” and label it but many people end up with the feeling that none of them have come up with a complete definition.

The truth is you can only define love through action and this shows that love has a completely subjective definition. Let’s delve deeper.

Love is about action – families and significant others

Families are the nucleus of civilization and an exchange matrix where central beliefs, the structure of meanings, functions, and identity melt together. Thus, it constitutes one of the main pillars of people’s mental lives.

Logically, in the process of individuation, from “we are” to “I am”, all this accumulation of concepts embodies each of its members. Some of them translate into mandates of origin and will reproduce – by opposition or adhesion – in other groups, couples or families.

Likewise, the family will always be the matrix, the foundation, and the reference pattern when it comes to each member of a relationship. They’ll be able to provide an independent sense of identity that mediates through the sense of belonging.

From this perspective, you can define “couple” as a system of two people who are spokespeople of the two systems made up, in turn, by four systems that, in turn, are the result of eight systems and so on in a never-ending geometric relationship.

Thus, you could define “couple” as two people of the same or different sex from two separate families who establish a link. A project with the common objective of developing a team. This by providing the necessary support and motivation in a space of their own that excludes others. In addition, its members relate to the environment as a twosome. They preserve, in turn, their own individual relationships with themselves and with the rest of their social networks.

A couple is interdependent because a fraction comes together and becomes dependent on each other, while the other fraction takes care of the spaces of autonomy.

This description clearly sets the boundaries of the consolidation of a couple. We could add that both partners have guidelines, norms, culture, functions, codes, mandates, values, beliefs, meanings, rites, styles of moving and processing information, etc. This is what each member brings in their “suitcase” and is willing to exchange and agree upon with more or less resistance.

From the synergy of all of these components that each person brings into a relationship, a couple will consolidate. That is, in the same way, that we go from “we are” to “I am” in the process of family individuation; when it comes to the construction of a couple we go from “I am” to “we are”. That is, what each person brings to a relationship (properties and attributes) constitutes a couple with an identity of its own.

While it’s true that either partner may have some things in common with their better half, there’s usually complementarity. That is, “You have something that I lack, and I have something you lack”. And it’s in this relational matrix where the essence of the bond lives.

However, the differences that played a significant role in partner selection can also work against a relationship and become a source of disappointment and frustration over time. For example, one of them might demand things that the other person never had to begin with.

This is a phenomenon that sprouts from growing as an individual and as a couple. A negative blow that leads to arguments and then to disqualification, aggression and many other types of defenses where one of the spouses discredits the other. Ok so… what’s love got to do with it?

Love is about action – falling in love

Love is the main characteristic that distinguishes a human relationship from the rest of the animal species. Many authors have tried, and continue to try, to define love. People from all walks of life such as romantics, poets, scientists, artists, and therapists have embarked on this task.

It’s true that love is extremely difficult to explain like most of the repertoire of abstract terms. Trying to translate love into rational meanings and imposing a share of logic in it if desired can plunge us into deep trouble.

Love is a feeling that emerges powerfully from the jaws of the limbic system. It doesn’t go through the sieve of the left hemisphere, rational and logical. Even though sometimes there are attempts to evaluate what were the characteristics, particularities, or attitudes for which one person fell in love with another. It’s, then, when you think of love. But this thought only comes up when love is already established. Either that or when there’s doubt. When you’re not convinced that the feelings you have towards another person constitute love.

A person in love feels and turns that feeling into actions and tries to be consistent and love is a feeling. Unlike sudden emotion, the feeling involves emotional, cognitive, and pragmatic variables. And another fundamental factor: time. This is because it’s responsible for exercising the three previous variables.

In any case, there are times when you might confuse love with other emotions. Being in love doesn’t mean falling prey, or being bound, hunted, trapped, hooked, or imprisoned. These are false conceptions of love. They’re feelings and emotions that confuse and have their progeny in psychopathological links, communicational dysfunctionalities, and personality type links.

When there’s love, there’s always a share of passion; yet passion isn’t the same as an obsession:

Thus, love is about action, not poetry. That is to say, love doesn’t have one definition but you can define it with words through actions that involve interactions.

Human beings translate their deep affection into gestures, actions, words, and phrases. They have a need to communicate, to transmit what they feel. This transmission encloses the secret expectation of loving reciprocity, of relational complementarity. In turn, it produces in one another the knowledge that they’re not alone in the company of a particular person. In this regard, unrequited love is one of the most frequent causes of despair.

Also, this transmission seeks security. Utopian security though, because the search for love assurance makes them neglect the gift of love and they mortgage the latter to secure the future. Thus, this carelessness has unfortunate consequences when the concern focuses on the future and not on the present.

When two people meet and they think they’re in love, their verbal communication activates. Words flow in harmony — although fear of rejection sometimes blocks that free flow. The phrases become poetic. In fact, this seductive imprint permeates the words of even the least histrionic of us.

A certain cadence appears in the discourse, and a certain hue in the way they compose the phrases. They modify their gestures. Their mimicry is more subtle and their movements slow down and become intentional. Also, their eyes narrow and their mouth moves provocatively while their eyes give you mutual feedback. This is a whole world of communication that tries to captivate and seduce another in order to begin a loving union.

The genesis of a good relationship is, among other things, feeling the same way and having the same freedom with another person that you have by yourself.

Neurobiologically, there are endocrinological and biochemical fluids that secrete when two people meet.

These are all the alerts that arrive with the object of your desire. Alerts that, if reciprocated, make your relationship harmonious. The growth of the bond (refer to the knowledge of one another in regard to values, tastes, virtues, defects, etc.) generates a complementarity that allows the slow progress towards the formation of a family if you desire.

Love is about action, not poetry

The establishment of a relationship makes it possible to lower your levels of romanticism (both verbal, corporal, etc). Not because you’re less in love, but because it varies in quality. This is because lovers worry about having their love reciprocated during this romantic period. Thus, they do things that captivate another and are skillful detectors of those details that seduce them and they put these things into play. This stage ensures the relationship, beyond the chemical and instinctive effluviums that accompany the process.

However, the establishment of a relationship doesn’t imply that courtship is over, quite the opposite in fact. A relationship is a love task that must continue for life.

Everyday life, routine, work, parenting, and disparate evolutionary growths, among others, are attacks against the stability of any relationship. Therefore, love must be an action that continues to create new definitions of love. These, in turn, will result in new actions that generate growth. Not only of the relationship but for love itself.

Does Unconditional Love Really Exist?
Unconditional love exists, but is it a good thing? After all, conditions and boundaries can help protect your self-esteem and well-being in relationships. Read more »
Link copied!
Interesting Articles
Emotions
The Satisfaction With Life Scale (SWLS)

Emotions
The Keys to Overcoming Stress and Anxiety

You need to understand two things to overcome your stress and anxiety. The first one is that you can't escape…

Emotions
The Affect Heuristic: What You Feel Is What You Are

The affect heuristic tells us that emotions determine a large part of your thoughts and, consequently, your decision-making. This is…

Emotional intelligence consists of being aware of your emotions and how they affect yourself and others. Thus, it begins with…