Cognitive deficits tend to be the first warning sign of schizophrenia. However, these deficits sometimes make it difficult to get a proper differential diagnosis. 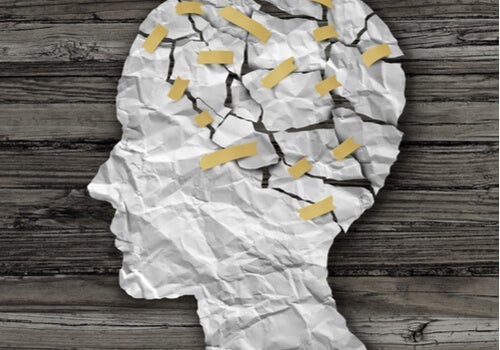 Cognitive deficits in schizophrenia can be severe and are often associated with functional problems. Unfortunately, it’s not always easy to identify what’s causing the deficits without a concrete neuropsychological profile.

It’s important to note that these deficits don’t seem to be the product of schizophrenia’s positive symptoms (hallucinations, thought disorders, delusions, etc.) So far, there’s no evidence of a direct relationship between the severity of the hallucinations or delusions and the seriousness of the cognitive deficits.

Cognitive alterations seem to be independent from the positive and negative symptoms of schizophrenia.

In some cases where patients are discharged after a long hospital stay, research shows that negative symptoms can improve while cognitive disorders stay the same or even worsen. What that shows is that these two elements are relatively independent of one another.

Cognitive alterations and negative symptoms are closely related due to how they interact. Nevertheless, this association isn’t easy to analyze.

In general, losing interest in things and feeling disconnected from a project impacts a person’s cognitive abilities. Consequently, the combination of these variables can have a greater influence on the prognosis.

The effects of cognitive deficits in schizophrenia

As we mentioned above, the cognitive alternations in schizophrenia can be severe. They limit personal autonomy and the patient’s ability to carry out their day-to-day tasks.

Causes of cognitive deficits in schizophrenia

Scientists don’t yet know what causes cognitive deficits in schizophrenia. Some experts suggest that it’s possible that these cognitive disorders are a consequence of treatment with antipsychotic drugs. However, there’s no data to back up that hypothesis.

Research shows that conventional antipsychotic drugs have a positive, albeit moderate, effect on some basic psychological processes such as attention. The downside is that they can also affect motor skills.

Thus, we still don’t know if antipsychotic drugs are a cause of or a solution to cognitive deficits in people with schizophrenia. Further research may shed more light on the topic.

In 2018, researchers at the University of the Basque Country UPV/EHU published a study that evaluated the effectiveness of several drugs in slowing down cognitive deterioration in patients with Alzheimer’s. To do that, they evaluated any significant improvement in cognitive alterations in patients with schizophrenia.

Through analysis of new clinical trials on a global level, researchers have made a series of methodological improvements in drug research that guarantees the functional recovery of these patients.

Cognitive disorders in patients with schizophrenia tend to be detected before treatment with antipsychotics.

One of the main problems with antipsychotics is that they’re only useful for treating positive symptoms. They’re not very effective for the negative symptoms of schizophrenia, which is why other non-drug-based treatments are also important.

For example, occupational therapy can help treat attention problems. It can help the patient improve their directed attention and concentration with exercises focused on stimulation, concentration, and handicrafts.

All treatments should be tailored to the needs of each individual patient. While some anatomic and neurochemical alterations are common among schizophrenic patients, the heterogeneity of the disorder makes it impossible to establish a general neuropsychological profile.