The Clock Test And How It Can Help Catch Alzheimer's Early 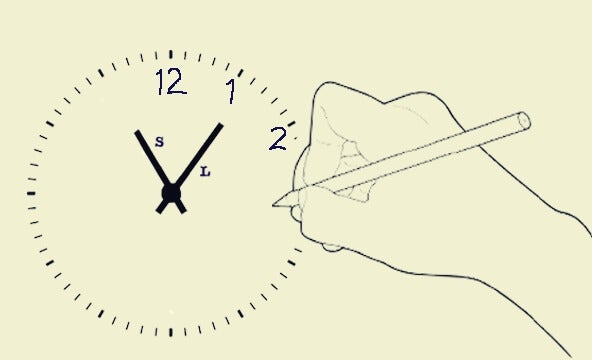 The clock test is a very simple diagnostic test to do. Its purpose is to evaluate the cognitive deterioration of patients and diagnose possible neurological and psychiatric disorders.

First used in 1953, it is one of the most common tests used to identify early Alzheimer‘s or other forms of dementia.

If we were to say that this test is based “only” on asking a person to draw a clock showing ten past eleven, then many may doubt its validity and diagnostic effectiveness.

However, there are a few practical aspects we must consider about what this (apparently) simple task entails.

Draw a clock. It’s so simple that it’s hard to believe it’s one of the most conclusive tests when diagnosing cognitive disorders such as Parkinson’s or Alzheimer’s.

First of all, you need to understand the instruction: “draw a clock showing such and such a time”. Then the person has to plan, use their coordination and adjust their visual perception, visuomotor coordination and visuoconstructive capacity.

It isn’t just any old test. Indeed, the cognitive efficiency that the clock test requires makes it one of the most useful tests in existence. Especially if we compare it with other ones that are more complex, more expensive and less reliable.

The clock test can evaluate a cognitive deficit

As we said earlier, this test was developed and applied for the first time in 1953. It sought to assess  constructive apraxia (common in dementia) and also identify the extent of lesions of the parietal cortex.

Little by little, when people started to see how effective it was, it became an essential tool in diagnosing cognitive deterioration. Especially associated with the first phases of Alzheimer’s disease.

The administration of this test, as we’ve explained, is simple. However, a trained psychologist must guide the process and analyze the results.

The results of this clock test can shed light on all sorts of different medical conditions, deficiencies or brain injuries. We should also note that there are up to 15 different ways to assess this test.

How is the clock test carried out?

Generally, the doctor or psychologist can choose to administer the test in one of two ways:

You’re probably wondering why the patient has to draw the specific time of 11:10. Something as simple as this means that the 2 visual hemispheres must participate.

The person also needs to listen to the instruction, understand it, remember what clocks look like, how to lay out each hour, and then plan where they’re going to place each hand.

How do experts evaluate the clock test?

As we said, there are many ways to evaluate this test. We can observe the circle, the order of the numbers and the positioning.

The expert can also take into account whether the numbers are inside or outside the sphere, if they are only on one side or if there are too many numbers.

People with schizophrenic disorders, for example, usually have an obsession for marking every minute on the clock face. Their drawings are usually quite bizarre, motley and almost unintelligible.

Maria is 80 and is going with her children to see a psychologist for the first time. “I forget things,” she says with a laugh as her family nods with worried looks on their faces. The psychologist takes down some information and chats with Maria to relax her and get to know her a little better.

He then asks her to draw a clock that shows a very specific time: 11:10. The result is the one we see below.

Maria’s cognitive decline is evident. This test will not be the only one that Maria will do. The experts will use other psychological tests and strategies to decide whether Maria has Alzheimer’s. However, the clock drawing test is a starting point and offers reliable and revealing information.

Maria is already advanced in years and loss of cognitive faculties is common. We should also mention that in recent years this test has been fine-tuned much more.

There is even a pen that the “Laboratory for Artificial Intelligence and Computer Science of Massachusetts” (MIT) has designed. It records the person’s pulse, precision, interruptions, trembling and other types of irregularities. Thanks to this technology, experts can extract thousands of parameters.

However, the most interesting things of all is that experts can make very early diagnoses of Alzheimer’s or Parkinson‘s disease. Early detection would give doctors the chance to develop better strategies and treatments.

The clock drawing test will continue to be one of the best tools for the detection of this type of diseases for the foreseeable future.

5 Warning Signs of Alzheimer’s
The warning signs of Alzheimer's can be detected from its early stages, and this can help us to delay its destructive course, read on to find out more Read more »
Link copied!
Interesting Articles
Psychology
Hysterical Aphonia: A Conversion Disorder

Hysterical aphonia manifests as a result of a fear of speaking or singing, psychological trauma, an ongoing voice disorder, long-term…

Psychology
I'm Nothing But Myself When I'm Alone

In one of his most famous sonnets, Para cuando me ves tengo compuesto (For when you see me), Miguel Hernández wrote…

Psychology
What Happens to Us after 30 Minutes of Silence and Solitude?

We need moments of solitude, silence, and disconnection to keep us motivated and authentic. It's like pressing reset. It makes…