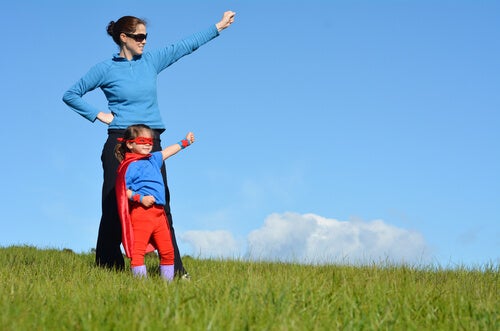 Mother: a great word. To a lot of people it’s beautiful, but it has a lot of different meanings. These come from things like memories, essences, and, of course, children. But it’s also a role that has its limits for the person playing it.  Going beyond them could endanger both the mother and the children, making them dependent and insecure.

We don’t want this to be just another article that lists all the things you’re doing wrong. Instead we’re going to talk about the actions and attitudes to balance out your role as a mother. But you have to do this without trying to hog or control everything. It will leave a space for your children to use their abilities to confront challenges that will help them grow. For their own good and yours too.

I just want the best for my children

This statement is one of the main principles a lot of mothers go by. But it’s ambiguous because it’s coming from the parents’ desires. It doesn’t make room for children as people with their own wants and needs. In that sense, it’s more like the statement: “I just want my children to have what I didn’t growing up (they’ll have everything)”

Every child is unique and has their own needs, likes, and  personality. But when parents, and especially mothers, have fantasies and desires for their children it’s hard to let them speak up and listen to what they have to say. What sport or extracurricular activity they want to do, what they want to eat, how they want to dress. Or what what they want to study or do with their life.

The mother’s mission is to be a helper and be beside her children while they grow up. Not to create their desires for them. The best thing for a mother might not be the best for her child. It’s the same when they’re young. Because children are dependent on their parents both economically and in terms of love and affection they might put their parents’ desires before their own.

Listen before you direct

Children, as small and defenseless as they might seem, have likes and desires from a very early age. Giving them options and the ability to choose will encourage that. It will also make them feel special and trusted when it comes to becoming more and more independent. As parents we think we know what’s best for our children, but you’ll just make them insecure if you choose things for them.

From the time they’re little you should let your children take part in decisions, like giving them options for lunch or dinner. For example, they can choose what kind of fish they want or you can consult them about changes you’re making, like redecorating their room. If they’re not able to decide, keep them informed and make them part of family decisions like moving or changing schools.

As mothers we see our children as small and defenseless. It’s hard for us to encourage  their independence. But not doing this can lead to dependent children who don’t know how to do things for themselves. Or to children who know how to but do everything insecurely.

You can encourage their independence from the time they’re really little. Setting all this in motion starts with not doing anything for them that they can do on their own. You can start as early as 8 or 9 months, for example, beginning with the Baby-Led Weaning method, which means letting your children feed themselves.

Another way to encourage your children’s independence is to include them in household chores. They should help you take out the trash, make their beds, or do the laundry. They can help take care of pets and plants, or even help prepare food or clean things up to the best of their abilities. And usually their abilities are more developed than you’d think.

Children love every part of this and it makes them feel helpful. You can encourage their independence starting from the time they’re little. It’s never too late to start. You won’t stop being their “directors” by doing this, you’ll raise children who can solve their own problems with a sense of self-esteem and self-confidence.

Nowadays we all suffer from “achievementitis.” As parents we let ourselves get caught up in it and prioritize our children’s grades over other experiences that are just as enriching. Education and studying become the main goal, and the only thing that’s important about our children.

We focus everything around this concept of education (which is very limited), and end up punishing them and telling them off when they don’t get good grades. We force them to spend their afternoons, weekends, and vacations studying. And when they fail we look for some kind of disorder or cognitive issue behind their failing grades.

To avoid this, mothers don’t hesitate to sacrifice their own free time to study or do homework with their children. They try to control everything and sometimes even do the homework for their children so they’ll get a good grade. But your job is to find the the right times and space and help them get properly organized. You should get them going but not do anything for them. As they get older your children have to realize that the homework is their responsibility, and has three goals that only make sense if they work towards them:

It’s hard to grow with your children and give them more and more space. But this space will help them grow and has stimulating goals for them to accomplish, and it’s a must. It’s just as much of a must as giving them a home, food, and clothes. In this sense, a protective, directing mother has to change little by little into a mother who walks beside and encourages, who gives her opinion but doesn’t decide.

This means you’ll have to help them even with dreams and goals that you don’t like. Maybe they’re not the ones you would have chosen for them, but you shouldn’t forget that it’s their life, not yours. As adults we have a lot of power to make that life wonderful, but also to hinder their dreams. That’s the true sacrifice, not anything else, that comes with raising children.

5 Books For Raising Children Who Believe In Themselves
Here we'll tell you about 5 great books for raising children who are happy, confident, and know how to process and express their emotions the right way. Read more »
Link copied!
Interesting Articles
Psychology
Defining Characteristics of Type B Personality

Boldness always has a bit of optimism. To be bold is to become a part of the resistance which is…

From a distance, a narcissist with a plan can seem charming, self-confident, and even considerate. Nevertheless, there are a few things that narcissists never do, especially when it comes to relationships.…

Are you one of those people who always notices changes in the weather? Do cloudy days put you in a bad mood? Don't worry, you're not alone. A lot of…