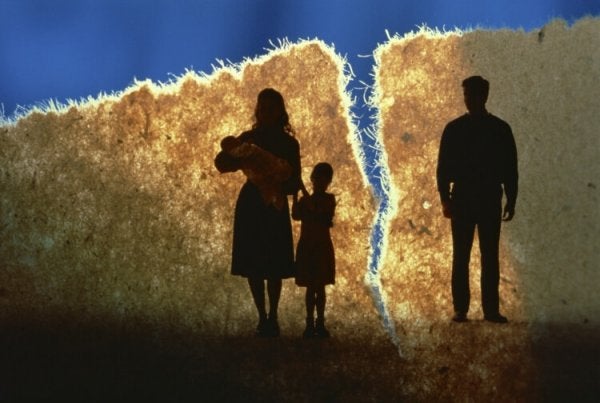 According to official Registry data, there were over 800,000 divorces in the USA in 2016. Divorce provides a legal framework that regulates relationships in such a way that all family members are protected. It may, however, be one of the most difficult experiences in the whole life of a family . Sometimes the procedure is by mutual agreement, although it is usual for one of the parties to take the first step. The family brings with it very deep feelings of protection, love and recognition. When there is a break up it leaves behind loneliness, fear, pain or rage.

Marriage break ups open the door to the ghosts of the past. In crises our personal history is reflected and our capacity to face the present is unmasked. Some people put hatred and resentment to one side, others erase the good times. Some cannot face what has happened and are hoping for a reconciliation that never comes. Others try to forget everything by finding another partner, or two, or three… As we can see, the range of reactions is very wide.

But while marriage is reversible, motherhood and fatherhood are for life. In going through a divorce, adults decide to finish their relationship. They can’t, however, do the same with their role as parents. Children should not be surrounded by a climate of violence and resentment. Minors should never become instruments – bullets with which to hurt other people or messengers of hope for a possible reconciliation.

When the war doesn’t end

Divorce should not be a hindrance to carrying out our fatherly and motherly roles. Nor should it be a process that harms the privacy, trust and security that the child needs. The children don’t belong to one or other of the parents. For that reason, they shouldn’t become an instrument in revenge, hatred or disputes.

Children are dependent on their parents and, although they aren’t their property, they need to maintain a relationship with both of them in order to grow up in a healthy way. It is sadly common to see one or the other claiming to love or care for the child more. In doing this they are suggesting that the affection of the other parent is not necessary or is deficient. This is one of the most serious errors the parents can make. It is also one of the things that causes greatest damage to the child.

Children need contact with both parents in order to have healthy emotional development. It is a child’s and a parent’s right to be able to enjoy one another.

The repercussions of divorce

After a contentious divorce it is common for parents to interfere with each other’s relationships. In the most serious cases one of the two parents, or even both, can seriously neglect the child, or even abandon them. The situations that can occur are many and varied. Either the father or the mother, or even both can abandon the children. One or both of the parents may also involve the children in the conflicts that spring from the divorce.

There are many repercussions that come from the conflicts in the relationship between the parents. How bad these are will depend on the way they are handled. The emotional costs can also be high, depending on how you try to resolve them and how long they last. When a couple face conflicts in an inappropriate way, this can generate dissatisfaction, aggression and tension to all concerned. It usually also causes greater emotional discomfort and a distancing among the family members.

A divorce implies a big change in the family dynamics, especially in the relationships. It shouldn’t, however, imply the abandonment of the children. The child’s suffering increases if, on top of a contentious divorce, one of the parents is absent, inconstant, or completely disappears. Coming to terms with an absent parent is hard enough on ones own. It becomes an even more painful battle when the child finds out that the parent is far away, doesn’t visit as they should, or quite simply doesn’t want anything to do with him.

The abandoned child often anxiously clings to the father or mother who has the custody. It is common for them to try and control the relationship, monopolizing your time through very demanding behavior. Behind all of this lies the fear of losing him or her, a feeling of strongly rooted insecurity.  Separation from an absent parent is very difficult, and the child has to detach themselves internally. It is common for them to imagine the parent returning and have daydreams about them. They can idealize the relationship in this way and avoid detachment.

If parents disappear, the child may feel that they have punished them. They may feel obliged to suppress all evidence of hostility and anger, and even to become extremely obedient and submissive. They often turn the suppressed violence against themselves. On the other hand they may become impulsive, aggressive and hostile.

Loyalty is a feeling of solidarity and commitment that unifies the needs and expectations of several people. It implies a link, an ethical dimension and, in the case of the family, understanding and coherence among the members. Generation by generation value systems are transmitted from one family to another. The individual finds himself embedded in a network of interpersonal loyalties, where trust and achievement are vital.

Many families are able to disguise such loyalties. Expectations are not explicitly stated but there are unwritten rules that all family members are expected to comply with. It is a type of justice within the family itself, an ethos of relationships that allows identification with the group.

All of this implies that each member of the family has to adjust their individual needs to fit in with the family network. Quite often the relationship breaks up, and this doesn’t put an end to the disputes between the parents. All that appears is a new framework in which to prolong the dispute. In these cases it is quite normal for the children to feel the need to ensure the affection of at least one of the parents. This is what we call a conflict of loyalties.

Children are pressurized to take sides and, if they don’t, they can feel isolated and disloyal towards both parents. On the other hand, if they do decide to get involved in order to feel more protected, they will feel that they are betraying one of the two. A family dynamic develops in which loyalty to one parent implies disloyalty towards the other.

Our responsibilities in the conflicts

It is vital that we don’t send contradictory messages to our children in our communication with them and the other party. For example, telling your child that you don’t care if they go to stay with their father, but then you stop hugging them. There is a double-edged sword in these type of messages.  The verbal and non-verbal language send messages that will greatly harm the child.

The child will perceive that they are doing something wrong, but doesn’t know what. This is because it is the adult who is causing the emotional conflict. These types of dynamics are very harmful to the mental health of minors.

The ideal scenario is that a couple stays together for ever. However, if both people and the whole family are suffering, and if the relationship is destructive, then separation might be the only option.

When the union causes pain we need to take decisions by perhaps considering a divorce or asking a professional for family or marriage therapy. However, a separation doesn’t imply disregarding our responsibilities as parents or using children against our ex-partners.

The divorce process is between two adults and they must act in a mature way to try and manage the conflicts and mixed feelings without including the children.

Children and adolescents need support and adult protection to feel safe and cared for. It is the responsibility of the parents to provide this stability. In the event that either one or both of the parents can’t cope with the process then it is advisable to ask for psychological help to receive guidance in this respect.

A counselor can help you to control your emotions, manage conflicts, make decisions, handle responsibility, and seek support etc. They will help you to close one door of your life and help you to face the future. The way we face conflicts dictates whether they are constructive or destructive, which applies even more so if there are children involved.

The Experience of Children With Divorced Parents
Many parents think that only they are directly affected by their separation. However, this isn't true when there are children involved. Read more »
Link copied!
Interesting Articles
Psychology
Psycho-Stimulants: Medicine for Annoying Children

In a world where the priority is always to be on time, it might be disturbing for a child to…

Popular or "street" psychology has defined bipolar disorder as one where people have frequent and uncontainable mood swings. First they're…

Psychology
To Accept Does Not Mean to Conform

Many times we tend to excessively suffer over situations that aren't totally under our control. And sometimes we have an…

Polarized thinking is a cognitive distortion. In other words, it's a reasoning mistake we make without realizing it. It makes us…