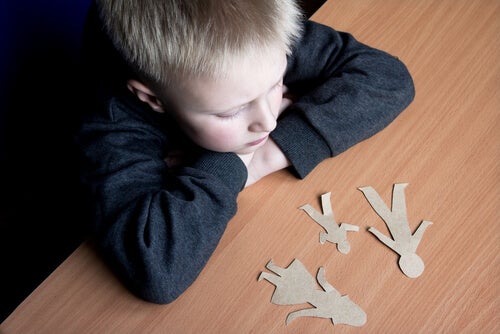 Richard Gardner first coined the term Parental Alienation Syndrome (PAS) in 1985. We see this syndrome primarily in the context of child custody disputes.

In parental alienation syndrome, one parent launches a campaign to damage the relationship the child has with the other parent. The children don’t want to believe that the people they love, who care for them and love them, are bad.

So, the most noteworthy symptom of PAS is signs of rejection from the child towards one of his parents after a difficult separation. These signs vary in intensity.

When PAS comes into contact with the legal system, it becomes a judicial-familial syndrome. The responsibility, then, extends to the judges and lawyers as well as the parents.

“The father or mother attempts to brainwash the child or children against the other parent.”

In parental alienation syndrome, the “bad parent” is despised and badmouthed. The “good parent” is loved and idealized. According to this author, the “programmer” parent indoctrinates the child to believe these things. Furthermore, the child himself contributes to the vilification of the target parent.

No scientific organization (such as the WHO or the American Psychiatric Association) recognizes parental alienation syndrome. In Spain, the General Council of the Judiciary recommends not accepting it as an argument. However, the judges have the last word.

Psychologists describe different possible motives a parent could have for trying to turn their child against the other parent. The most significant ones are the following:

Parental alienation syndrome may happen when one of the parents doesn’t accept that the relationship is over, or want some kind of financial benefit after the divorce.

The parent might be jealous of the other. He or she could also be trying to gain the upper-hand in decision-making related to dividing assets.

Psychologists also hypothesize about the pathology of the individual. They posit that there could be a personal history of abandonment, alienation, physical or sexual abuse, or even identity loss (Garden, 1998b; Dunne and Hedrick, 1994; Walsh and Bone, 1997; Vestal, 1999.)

Gardner (1998b) describes a series of “primary symptoms” that usually appear together in children affected by PAS:

“No child should be treated like a traitor just because he loves both parents.”

Other indicators of parental alienation

Other authors besides Gardner have also written about the following indicators (Waldron and Joanis, 1996):

Children with Parental Alienation Syndrome and their fear

Fear is very common among children with PAS. Consequently, they may display the following symptoms:

However, children are not the only one who experience fear. The alienating parent’s family members tend to support him or her. Consequently, they reinforce the belief they are in the right.

What strategies does the alienator use to distance the child from the other parent?

The alienation techniques can be quite diverse. They employ a wide range of strategies, from the most shameless to the most subtle. For example, the “accepted” parent might just deny the existence of the other parent. They label the child as fragile and in need of protection. As a result, a close-knit loyalty is created between them.

Another technique is to turn normal differences between parents into matters of good/bad or correct/incorrect. They turn insignificant behavior into generalizations or negative traits. As a result, they put the child in the middle of the argument.

Another strategy is to compare good and bad experiences with one parent and the other. Or they might question the character or lifestyle of the other, or tell the child “the truth” about past events to gain their sympathy.

They may play the victim, or provoke fear, anxiety, guilt, or intimidation in the child. Finally, they might also be extremely indulgent or permissive. (Waldron and Joanis, 1996).

The Experience of Children With Divorced Parents
Many parents think that only they are directly affected by their separation. However, this isn't true when there are children involved. Read more »
Link copied!
Interesting Articles
Therapies
Jeffrey Young's Schema Therapy Model

Psychology
Dreams Originate in the "Hot Zone" in Your Brain

New research and new discoveries in sleep science are always fascinating. For many people, dreams are an important source of…

Psychology
You Have the Right to Have a Gray Day

As the human beings we are, we have the right to be sad sometimes, to not be one hundred percent, to not…