According to Carl Jung, to be happy, you have to be able to look within yourself. Read on to discover his five keys to happiness! 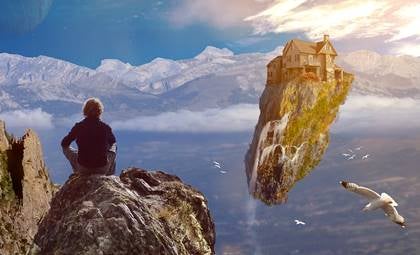 Carl Jung’s keys to happiness ring just as true even decades later. The Swiss psychiatrist and father of analytical psychology was much more than just the man who left us with concepts such as archetypes and the collective unconscious. Jung was an expert in the complex alchemy of human emotions, images, needs, and the keys to happiness.

“We are the origin of all coming evil”, he once said in an interview in the midst of the Cold War. He also once said, “I am not what happened to me, I am what I choose to become”. He knew that humans were capable of awful things, but also greatness. According to him, you can only achieve hope and wellness through individuation.

That interesting concept also has a strong relationship with Jung’s concept of happiness. For him, it was a process of becoming mentally free.

You would live without fear or anxiety and become a whole person with nothing in the shadows. Your unconscious would rise to the surface and you would have a clear sense of your goals.

This idea was without doubt the cornerstone of the father of spiritual psychology’s thinking. He also provided a simple list of the things he felt could lead a person to happiness. He did this during a series of interviews collected in the book C.G. Jung Speaking (1987).

“The privilege of a lifetime is to become who you truly are.”

The keys to happiness, according to Carl Jung

There are tons and tons of lists about how to achieve happiness. Lots of them fall into that trap of positivity that doesn’t actually go very deep, though. They’re not realistic, nor do they provide any concrete help. Carl Jung’s keys to happiness may seem simplistic too, but there’s one thing that sets them apart.

The father of analytical psychology said that if you blindly obsess over these five things, you’ll end up achieving the opposite of their goal. What you need to do is have clear goals, but also be flexible, receptive, and intuitive. As Jung would have said, you need to be able to spot the synchronicities that can bring unexpected wonders into your life.

You can’t have one without the other. In fact, Carl Jung believed that psychology was actually the only science that could save us as human beings and measure our wellness.

That being said, he didn’t think the only purpose of psychology was to treat mental disorders and suffering. He also saw it as a tool to fulfill ourselves as people, clarify our goals, and learn who we are. That, to him, was just as much one of the keys to happiness as bodily wellness.

The quality of your relationships with other people is one pillar you’ll see in every handbook for happiness. It’s not good to live life disconnected from other people. You need affection, friendship, security, and love. You need to communicate, share, discover new horizons, learn how to care and be cared for, and create meaningful bonds.

3. The ability to perceive beauty in art and nature

Art is a cultural product made by human beings, which is more than just an aesthetic creation. Every single work of art also contains the essence of a human being. They’ve put their emotions, creativity, idealism, innovativeness, and mastery into things that started out in their minds and in what Jung called the collective unconscious.

You have to be able to appreciate all that can elevate you, bring you pleasure, and make you happy. This also goes for being able to appreciate nature. Our very roots are in nature. Every single creature and place on our planet can give you some excellent wisdom if you know where to look.

4. Believe in something: A religion or a philosophy

For Carl Jung, there was no happiness without spirituality. Whether you followed a religious doctrine or philosophical movement, he thought that believing “in something” could act as a foundation for well-being.

It gives each experience a context and an origin, and makes you feel like there’s more than meets the eye to this world. It gives you a sense of meaning and purpose.

Jung talked a lot about how he wanted to be an archaeologist when he was a child. But life ended up taking him on a path to studying medicine And then specializing in psychiatry.

He did still get to use his passion for history, anthropology, and a desire to “dig into” the deepest parts of humanity, though. But he did that through analytical psychology.

It’s not always in your hands whether or not you have a fulfilling job. But if you can make the right choices about your career path, with a clear sense of your goals, you’ll have an easier time finding a fulfilling job.

In the end, happiness is also about giving your best, and that’s easiest when you’re doing something you’re good at and passionate about.

In conclusion, Socrates once said that you had to descend into the deepest parts of yourself to find happiness. In a way, that’s not so different from what Jung advocated for. The point is to become aware of your inner voice. Once you’ve done that, you’ll feel free and capable of shaping the life you want to live.

Tal Ben Shahar, the Happiness Professor
Being happy is all about enjoying what you have now. It is being peaceful and fulfilled by what you have. That is how the professor of happiness, Tal Ben Shahar, explains it. Read more »
Link copied!
Interesting Articles
Personal Development
Courage is about Making Things Happen

You've probably been in situations where you couldn't express yourself. You were told not to speak or you could just…