Can Viruses Control Our Behavior?

It may seem like science fiction, but it isn't. Viruses can alter our behavior to facilitate the spread of viral particles so that they can reach more hosts. They do this in a variety of ways. 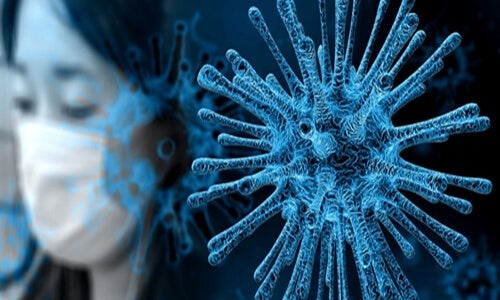 Can viruses control our behavior? Maybe it’s not a question you’ve ever asked yourself but many people have. It’s true that it seems the question has been taken from a science-fiction or even a horror novel. However, science, which is accustomed to asking much more complex questions, has discovered that they do indeed: viruses can alter our behavior.

Of course, they don’t do this in a direct way. They don’t hijack our will or make decisions for us. In fact, they do it in a more sibilant, silent, and cunning way. Because, if there’s one thing that these infectious microscopic beings desire above all else, is to survive, replicate, and be part of complex ecosystems.

Therefore, one way of achieving their vital goal is by altering the behavior of the host that they’re lodged in to disseminate more viral particles. Thus, many of those symptoms we experience when we go through flu, diarrhea, or even a simple common cold, are intended to be transmitted to other healthy individuals in order to spread the infection.

Sneezing, for example, is more than just a natural mechanism for expelling invaders from our bodies. It’s also a way by which viruses, in effect, “jump” from one organism to another. And it works for them, as we well know. However, there are even more fascinating (and disturbing) facts on this subject.

How can viruses control our behavior?

The word “virus” in itself already scares us and even more so in the current context of COVID-19. As people often say, our worst enemies are precisely those we can’t see. Those that are only visible under a microscope and that have the power to weaken our health.

However, what are these living beings really like? In reality, they’re nothing more than packets of genetic information. They’re containers surrounded by an eye-catching protein capsule.

Their sole purpose is to get into other organism’s cells in order to survive and multiply. Not only do they infect humans but they also invade animal organisms, plants, fungi, and even bacteria.

So, when asked how viruses can control our behavior, the first thing we have to understand about them is that they’re smarter than we think.

They lack brains, obviously, but it’s common for virologists to define them as highly intelligent beings. They know how to enter a cell, disarm it, and transform it so that it replicates viral particles. In addition, as we mentioned above, they also alter the host’s behavior. Let’s see how.

The symptoms of disease: the ways viruses spread

To find out if viruses can control our behavior, we’re going to refer to a recent study. It was published in the journal PLOS Pathogens and conducted by Dr. Claudia Hagbon and Dr. Maria Istrate from Linköping University in Sweden.

In this study, they tried to delve deeper into a type of infectious disease that, each year, takes the lives of 600,000 children. It’s a very high figure and its cause is a rotavirus.

The most obvious symptoms are always vomiting and diarrhea. It was believed that vomiting was a defense mechanism of the body itself against the disease.

Vomiting was thought to follow this connection between the brain and the gut to release a dangerous element, bad food, or another toxic agent from the body.

In this case, it was the serotonin that activated the nervous system so that the brain generated this behavior, and could, thus, release these harmful elements from the body.

Now, what this team of Swedish doctors discovered in this respect was the following: the rotavirus controls the mechanisms of vomiting and diarrhea and it does so with a very specific purpose: to disseminate viral particles and infect other people.

The science of behavioral virology

Can viruses control our behavior? The answer, as we can see, is yes. They do, and their strategy is to turn our symptoms into their mechanism of infection towards other people, even other hosts. In their goal to survive and replicate, they take control of behaviors such as sneezing, vomiting, and diarrhea, among others.

However, the science of behavioral virology has gone even further. Research such as that of the Karolinska Institute in Stockholm, Sweden, has revealed more.

Some viruses can completely alter our behavior. They can cause irritability, insomnia, hyperactivity, and even radically change a person’s behavior.

An example of this is Creutzfeldt-Jakob disease (mad cow disease), where the animals suffer from progressive dementia, difficulty walking, agitation, and mood swings. Another example is the Borna disease virus, for example, which was first described in horses in 1766.

However, it has also affected some people, producing clinical symptoms that are very similar to schizophrenia. Rabies is another example of how a virus can alter an animal’s behavior.

In conclusion, fortunately, science protects us from the effect of many of these viruses. For the rest, those we yet don’t have a vaccine or a defense mechanism for, there’s a highly effective strategy: frequent hand washing and hygiene.

The use of anti-psychotics is spreading. Furthermore, medical professionals don't just use them to treat psychotic disorders. In fact, they…