You may have heard of beta or alpha wave stimulation as a brain treatment but are you familiar with gamma waves? Did you know that brain wave stimulation is a current treatment for Alzheimer's disease? Continue reading to find out more about it. 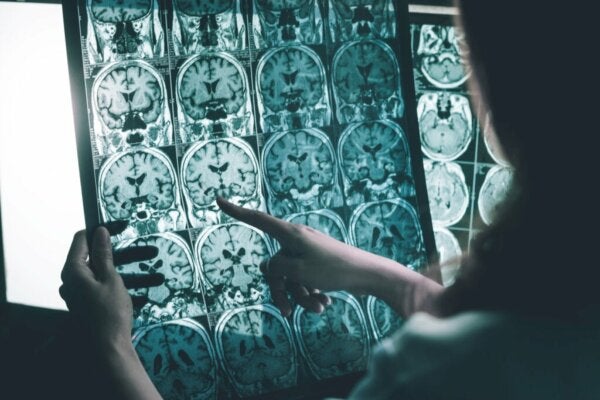 Do you know what gamma waves are? Are you aware of the benefits of wave brain stimulation as a treatment for Alzheimer’s disease? The advancement of science and technology and their relationship have allowed the development of new treatments that are literally a ray of sunlight for these patients.

Alzheimer’s disease remains a mystery. It’s a disease that doctors can only confirm postmortem. Its origins are still unclear.

No therapy, drug, or other forms of treatment have yet been found to slow down or reverse this disease. Therefore, any small progress that slows down its progression or even improves cognition is a great achievement.

What are gamma waves?

These are neural oscillation patterns whose frequency range between 20 and 100 Hz. Typically, they manifest around 40 Hz.

These waves reflect high brain activity. Higher than that reflected by beta waves, which are those present when a person is deep in thought. These waves indicate the brain is working “at full speed”, activating different brain regions.

In addition, some believe these waves are those set in motion by complex executive functions or higher mental activity. These are complex activities such as orientation, attention, consciousness, and reasoning, and require the coordinated activation of neurons in various brain regions. All for the integration of different types of information with which to make sense of reality.

However, it seems that these waves not only reflect this type of activity but also that it has nothing to do with concentration. They also seem to be related to explosive behaviors, anxiety, and fright.

What does wave brain stimulation do for Alzheimer’s?

As we mentioned at the beginning, the origin of Alzheimer’s is still unknown. Researchers are aware of certain pathophysiological alterations that are characteristic of the disease. For instance, deposits of amyloid-beta protein that end up forming plaques around neurons and render them useless. Also, the formation of intracellular neurofibrillary tangles and the presence of phosphorylated tau protein.

According to the studies, the gamma activity of the brain of Alzheimer’s patients becomes altered. This could contribute to deficits in complex cognitive functions, such as those mentioned above.

Based on this finding, the Massachusetts Institute of Technology (MIT) designed a study with genetically modified mice to produce an excess of beta-amyloid, mice with Alzheimer’s, that is.

The experiments were led by Li-Huei Tsai, director of the Picower Institute for Learning and Memory at MIT. They consisted of stimulating the activity of the gamma waves of the mice with Alzheimer’s by means of a flashing light at 40 Hz.

The results revealed that the amount of beta-amyloid plaques and phosphorylated tau protein drastically decreased. Not only that, the waves improved the activity of microglia, the cells responsible for cleaning waste in the brain.

In this first experiment, they limited themselves to stimulating the gamma activity of the visual cortex. However, they wanted to go further. Thus, they tried to induce gamma oscillations by exposure to 40 Hz tones. This, in addition to reducing the amount of beta-amyloid in the auditory cortex, reduced it in the hippocampus as well. You may not know it but this region is crucial for memory formation.

Not satisfied with the result, the researchers decided to see what effect combining both types of visual and auditory stimulation would have. As a result, they found that not only were the results positive but were twice as beneficial as each of the stimulation modalities alone. Even the response of the microglia was much stronger.

Tsai and her colleagues found that the beneficial effects of gamma stimulation faded in those rodents who underwent stimulation and then rested for a week. This might indicate this type of therapy must be intensive to be effective.

This technique has only been tested in mice with Alzheimer’s, although tests with healthy humans have already begun. Recently, it’s beginning to be tested in patients with early-stage Alzheimer’s.

The most important puzzle remains to be solved: will a human brain behave the same way a rodent brain does? Hopefully!

What do you think it would mean to discover that this type of stimulation can indeed slow down or even stop the symptoms of Alzheimer’s? Some think it would be quite the revolution. This is because there’s still no effective treatment for the most prevalent dementia in the world.

My Grandma with Alzheimer’s Had a Lot of Fun
My grandma had Alzheimer's, and she had a great time. When she was 90, she started to have memory lapses, usually about trivial things. Read more »
Link copied!
Interesting Articles
Brain
The Moral Brain: The Neuronal Basis for Ethics and Human Values

There are 5 kinds of brain waves and they work almost like musical notes. Some are low frequencies, others are high…

Brain
Conscience and Consciousness: Are They the Same?

Many people believe that conscience and consciousness are the same things, but that couldn’t be further from the truth. Both…