Your Brain Has an Autopilot Mode: The Default Mode Network

Scientists believe that the default mode network takes control of your brain when you're sleeping or in a state of rest. Having your brain on autopilot is actually quite beneficial: it strengthens your sense of self and reduces stress and tension. 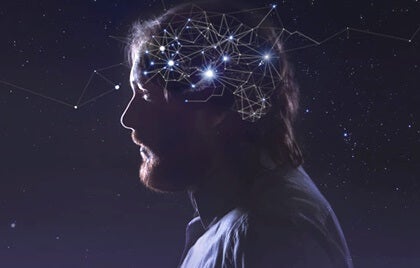 Although it might surprise you, your brain has a private life independent of your conscious mind. The default mode network is an area of the brain that acts as an autopilot whenever your mind wanders or you disconnect from your surroundings in a state of relaxing self-absorption.

For many years, researchers believed that your brain showed its potential anytime you did a particular task. In particular, that it showed signs of reasoning, memorizing, and inferring. However, experts discovered something as fascinating as it is puzzling: the brain never rests. Even when you’re sleeping, your brain is working hard.

When you’re not doing or thinking anything, your brain is still immersed in its complex activity. During those moments of apparent cognitive inactivity, the default mode network (DMN) is activated. Scientists named this activity, as well as all the processes that occur to keep the brain alert and functioning, “dark energy”.

Neuroscientist Marcus Raichle discovered this unique energy in 1990 while he was conducting experiments with functional magnetic resonance imaging. He found that it didn’t matter if a person was resting, doing nothing, letting their mind wander, or daydreaming. Thus, the brain has a “life of its own”, so to speak.

“I am a brain, Watson. The rest of me is a mere appendix.”

Here’s an example. Say you’re in a library, reading some notes you want to memorize for a test. At one point, you start daydreaming. Thus, now your default mode network is in control of your brain.

After a few moments, a squeaky chair brings you back to your notes. Right when you stop daydreaming and start focusing on your homework and the world around you, the task-positive network (TPN) springs into action. This area of the brain helps you focus your attention on your surroundings. The energy and electrical activity that occurs in your brain go from one set of structures to another, depending on your mind’s external demands and needs.

Where’s the default mode network and what activates it?

The default mode network consists of three concrete brain regions: the medial prefrontal cortex, the posterior inferior parietal lobe, and the medial temporal lobes. Dr. Marcus Raichle called the circuit that activates in these structures the default mode network. However, in 1997, when he published his data, the media decided to give it more interesting names.  That’s where terms such as “the daydreaming network” or “the brain’s dark energy” came from.

We now know the brain parts that are involved in this default mode. But what activates it? Why does the brain have a system that functions while we’re daydreaming? Here’s one of the hypotheses:

Curiously, the brain uses almost the same amount of energy when you’re resting as when you’re fully aware of your surroundings. Both states are equally important.

The connection to psychological disorders

This information is vitally important regarding mental health issues. Scientists have discovered that the default mode network doesn’t work effectively if you’re depressed or you have an anxiety disorder.

As we mentioned above, these daydreaming, self-absorption, and zoning out states are actually important for the human brain. Letting your mind wander (occasionally) provides some stress relief. This allows you to escape from reality and take refuge in a safe space.

Research shows that, although people with depression are capable of zoning out or daydreaming, it doesn’t produce positive emotions in them. It isn’t a good experience. On the contrary, it tends to increase their feelings of negativity and despair. Thus, the default mode network doesn’t work in the same way in people with depression.

In this regard, we should also mention that scientists discovered that Alzheimer’s patients and people with autism spectrum disorder have the same problem. In addition, they have a lot of trouble going into or leaving a state of mental relaxation. That means they have less of an opportunity to strengthen their sense of self.

We’re just beginning to scratch the surface of understanding the default mode network. Thus, it’s still another mystery of the brain. That being said, advances in neuroscience are allowing us to understand it better.

What Does Your Brain Do While You Sleep?
When you're sleeping, your brain restores the energy it used during the day and processes new information. It's an extremely important process. Read more »
Link copied!
Interesting Articles
Research
Avoid Bad Research Practices with Pre-Registration