My Grandma with Alzheimer's Had a Lot of Fun

My grandma with Alzheimer's had a lot of fun. She taught me how to live in the present. 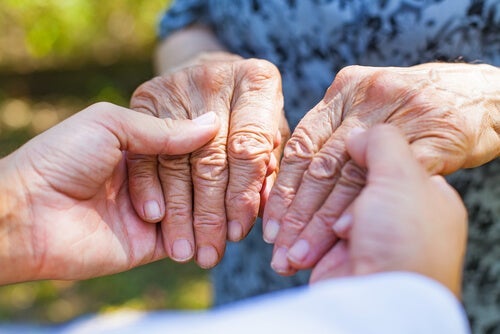 My grandma had Alzheimer’s, and she had a great time. When she was 90, she started to have memory lapses, usually about trivial things. At the age of 92, she started to forget the last thing she had done, but she did remember that she had been immersed in a task that she had more or less enjoyed. She died at the age of 96, and her Alzheimer’s didn’t progress much in those four years. Just enough to ask you the same question four or five times.

She’d been a wonderful cook when she could still take care of herself. In her last years of life, she had to use a walker to get around. Several knee and hip surgeries restricted her mobility, but that didn’t stop her from getting out and about. Her energy amazed all of us. Everyone who knew her admired her. My grandma, after all, was a fighter all her life, with and without Alzheimer’s.

When she started to show signs of her illness, I already had my driver’s license and my own car. She lived alone, but Alzheimer’s didn’t stop her from living a fairly normal life. A nurse kept her company at her house, and she was relatively self-sufficient. Nevertheless, she loved to come and eat with me and my parents at our house. At around 12:30 p.m., I’d go and pick her up. Our tradition was to drive around for about an hour in the car.

She loved to look out the window and watch the landscape, especially the Mediterranean view. We’d go through part of Mallorca every time we went out. We even went to her favorite restaurant to “have vermouth”. And after the tour around the island, we’d go back to my parents’ house to eat. “Where have you been?”, my father (her son) would ask her. “I don’t know, but I liked it a lot,” she would respond, smiling and happy. “Let’s see, what did we do?”, I’d ask her. “We’ve seen a lot of the country… But I don’t remember, I think we went pretty far,” she would respond.

My grandma with Alzheimer’s laughed at everything

The conversations I had with my grandma were easy, we could talk about anything and everything, but her short-term memory often failed her. In spite of that, when we would repeat the same action several times, she would remember little by little. Psychology was one of the subjects that were hard for her because she could never remember what it was for. I realized that it was more her memory lapses than the difficulty of a particular subject that made it hard for her to retain information. But she didn’t mind, she would laugh and was a good sport about it.

As hard as I might try, I can’t remember moments when she got angry about how her memory failed her. On the contrary, she thought it was funny. She often told me, “Have you seen how people get when we’re old? We can’t remember anything.” She would laugh at herself. She took everything in stride, and so I did too.

I remember a scientific article by Niu and Alvarez-Alvarez (2016) that found that among Europeans over 65, at least 4.4% suffer from Alzheimer’s. What does it feel like to forget what you know, little by little? What can a life with no recent memories be like?

This article led me to look for more information about the care of Alzheimer’s patients in Spain. I found one that talked about available resources. In a 2016 article from Martinez-Lage’s team, it appears that Spain, in recent years, has improved its diagnostics and follow-up for people with cognitive decline and dementia. However, they also highlighted the need for faster diagnosis and better access to early care.

When grandchildren take care of their grandparents

Taking care of my grandma with Alzheimer’s taught me a very important lesson: even though she didn’t remember what she had done, she remembered enjoying it. That happiness, in turn, got her through a good part of the day. It seems to me like a lot of people believe that older adults with Alzheimer’s won’t feel pleasure when they participate in an activity. Or they ask themselves what’s the point if they won’t remember it anyway.

“My grandma with Alzheimer’s decided to stop getting annoyed when she turned 90 years old. She had always been a woman with a strong personality. But from that moment on, she smiled at life and laughed often. That helped her to deal with her disease with a smile on her face.”

This lesson helped me when, years later, I did my psychology residency in a retirement home. In fact, my favorite residents were those with Alzheimer’s and who didn’t worry about anything. I knew they wouldn’t remember anything the next day, but they truly enjoyed the present. As a result, I decided that, while I was doing my residency, all of the residents would be my grandmas and grandpas. They would enjoy the moment. After all, that’s the only thing that’s for sure.

What Our Grandparents Need Is Love and Patience
Maybe our grandparents don't have the energy they once did. It might be hard for them to move. They might not remember who you are. Read more »
Link copied!
Interesting Articles
Family
Family Beliefs: What Can We Learn From Them?