Brain Dominance According to the Herrmann Quadrants: What's Your Type? 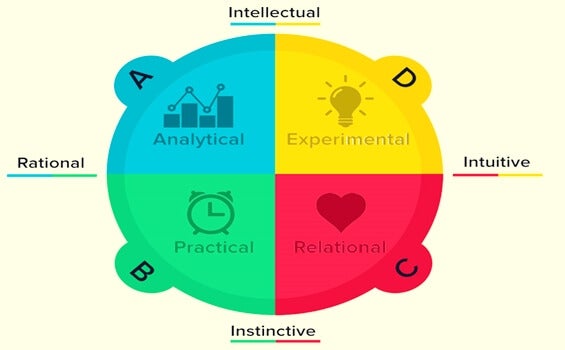 The Herrmann brain dominance test is an instrument made up of 120 questions used to find out how we process information and what our learning style is. This interesting model explains that the brain has four quadrants and generally speaking we all have a certain predisposition.

Maybe you’ve already done the test. However, it’s actually not especially common. Why? Because the “Herrmann Brain Dominance Instrument” (HBDI) is not valid from a neurological point of view. In fact, many scientists say it’s pop psychology.

“The mind is not a vessel to be filled but a fire to be kindled.”

The subject of brain dominance and lateralization is very controversial. Let’s take an example. This instrument explains that creativity is located exclusively in the right hemisphere of the brain. But this is not entirely correct, given that creative processes actually use all the areas of the brain via its amazing, sophisticated neuroactivity.

Does this mean that the Herrmann brain dominance test is completely useless? Absolutely not. There is one aspect that makes it valuable, and that’s why we’re talking about it today. This test starts from an important premise: each person has a particular way of processing information, transforming it, and taking in and interpreting data.

All we have to do is look at students studying or even at ourselves when we work. Some people are more meticulous and conservative while others are innovative Some are more visual and others process information better by hearing it…  All of this fits into the hypotheses of the Herrmann test.

Brain dominance in the Herrmann test

Before talking about this instrument developed in the 90’s, let’s talk about its creator, professor Ned Herrmann. He was president of the American Creativity Association and a pioneer in the field of creative thinking and reasoning. He specialized in physics and music. From a young age, he worked at General Electric to improve production, motivation and creativity among the employees.

To this end, Herrmann analyzed the workers’ different styles of thinking and learning. From that, he drew a brain map. Then, he developed the theory of brain quadrants and outlined 4 typologies. They are four different ways people supposedly tend to learn, think, create, interact and understand life.

The Herrmann understanding of brain dominance goes like this:

Ned Herrmann called them experts. They’re characterized by a logical, analytical and technical style of thinking.

Type B: the organizing style

As the name says, this is an organized type of person who loves order and is meticulous.

Type C refers to brain dominance tending towards emotions and the need to connect with others. They relate with others and enjoy social contact where they can feel useful, giving and receiving. They are people who are good at communicating, spontaneous, and extroverted. In general, they prefer jobs like journalism, nursing, social work, advocacy, etc.

The fourth profile in this brain dominance test refers to personalities with holistic minds. They are visual, spontaneous and highly creative people. They are people who like to experiment and innovate, even if it comes with risk. They are always looking to the future but they try to learn from the present too. So, you’d see type D people working as architects, writers, musicians, painters, designers, etc.

In conclusion, having seen the four typologies of the Herrmann brain dominance test, you very well may not identify with any one area. This is common. In fact, estimates of the Herrmann Brain Dominance Instrument (HBDI) say that almost 60% of people have characteristics from more than one of these four areas.

Also, it’s important to point out that no one dominance is better than another. In addition, they don’t determine or predict anything. All they do is indicate to us what kind of orientation we tend to have when interacting with our environment. They speak of our style of processing the data we get from it. It’s a simple way of getting to know ourselves a little bit better… why not give it a try?

Raven’s Progressive Matrices: What Are They For?
Raven's Progressive Matrix test is one of the most commonly used forms of evaluating intelligence. Perhaps you have already heard of it at school or work. Read more »
Link copied!
Interesting Articles
Psychology
Technological Insomnia: Screens That Cause Insomnia

Stupidity always puts itself in the front of the line, in order to be seen and admired. Meanwhile, intelligence is sensibly quiet, observing from a discrete corner. Ignorance is a…

Lewis Goldberg's personality theory is also known as "The Big Five" or the "Five Factor Model." It came out of different…