Big Fish: The Fish As a Metaphor for Life 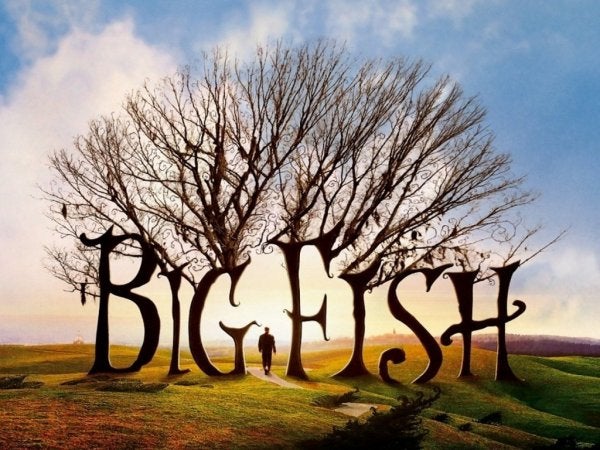 Big Fish (2003), directed by Tim Burton, is a movie loaded with symbolism and metaphor. It isn’t full of the dark, sinister scenes that we normally associate with Burton. It is just the opposite. Big Fish is all color, light, and harmony.

One day, Sandra calls her son to tell him that his father is seriously ill. So, Will and his wife take a trip to visit him.

Edward and Will had a great relationship during Will’s childhood. Over the years, their relationship cooled. Edward is known for telling stories about amazing feats involving giants, witches, werewolves, etc. Will loved these stories when he was a child, but when he grew up, he realized they weren’t real.

After that, he wants more than anything to know the truth about his father. He can’t accept that his father won’t stick to the facts when he tells stories.

Will tries to convince his father to tell him the truth, but Edward is very proud of his stories. It’s something that he doesn’t want to change, not even for his son.

Paradoxically, Will himself is actually a writer. He tells fantastic stories as well, of things that never were and never will be. We can see that deep down Edward and Will aren’t that different. One tells stories and the other one writes them.

“The thing about icebergs is you only see 10 percent. The other 90 percent is below the water where you can’t see it. That’s what it is with you Dad. I’m only seeing this little bit that sticks above the water.”

Will has trouble accepting his father. He doesn’t trust him and he’s come up with theories to justify his absences when Will was a child.

In the particular life moment they find themselves in, Will becomes a sort of replacement for his father. Edward’s life is ending and another is on its way. Will will be the father figure that his son needs.

At first, Will judges and criticizes his father. He doesn’t think he’s been a very good role model. However, a parent’s job is never easy and now Will has to face that situation.

He wants to be a completely different kind of father than his dad was for him. He wants to tell his son the truth. But, little by little, Will ends up accepting his dad and understanding this truth: his dad will leave him a legacy of stories, and Will will take his place.

The metaphors in Big Fish

Big Fish is the type of story that uses and combines a wide variety of narrations and incidents. It is the life story of Edward Bloom. The last name is a metaphor right off the bat. Bloom is exactly what Edward does, just like a flower. He is born, he reaches the height of his splendor, and then, little by little, he withers.

There are many metaphors in this movie. We’ll try to explain the most important and interesting ones.

When Edward tells stories about his childhood, the fish is an important figure. The fish is the unifying thread in the movie that is there from beginning to end. It is the metaphor of Edward himself. When he was a child, he read about a fish that changed size depending on its surroundings. When free, it could triple in size.

Edward understands that he is like the fish and that his limitations in life are like the fishbowl. Edward realizes that in order to achieve his goals, he has to figure things out based on said limitations.

Keeping with the metaphor, if we escape the fishbowl we are free, we can determine our course, and achieve greatness. At the same time, leaving the fishbowl can be terrifying because we don’t know what’s out there.

“Did you ever think maybe you’re not too big— but, maybe this town’s just too small?”

What do you have to fear if you already know how your life ends? In Edward’s stories about his childhood, there is a witch with a glass eye. If you look at the glass eye, you’ll see how you’re going to die. Edward looks at it, sees how he is going to die, and accepts it.

When he finds himself in a dangerous situation, he faces it and tells himself “this isn’t how I’m going to die.” That way he’s able to overcome obstacles and keep moving forward.

Edward accepts his destiny, which is the same for all humans: death. He faces it and overcomes it, he doesn’t let fear take control.

This is Edward’s fishbowl. The town he was born in. A small, limited town for a man of his hopes and dreams. In spite of that, he has a great reputation among his neighbors and is able to do great things inside his fishbowl. He does all this without having to face too many obstacles.

The fishbowl is our comfort zone. It represents conformism. It is the place where we feel safe and it’s hard to leave. However, in our fishbowl our opportunities for learning are limited. That’s why Edward decides to face the unknown and leave his fishbowl.

After leaving Ashton and starting his journey, he enters a series of obstacles that he has to overcome to get to Spectre. This is a utopian town where everyone goes barefoot and nothing ever happens.

There, he finds a former resident of Ashton, Norther Winslow. Winslow was a well-known poet in the town who was destined for great things, just like Edward. That’s why he made the same trip.

However, Norther was caught by another fish hook and can’t write poems anymore. He ended up in another fishbowl. Spectre, in spite of the fact that it is a wonderful place, is still another comfort zone.

Edward plans on staying, but he changes his mind and keeps moving. He still has a lot to see. The screenwriter didn’t choose the name Spectre randomly. Actually, it’s a reference to ghosts and apparitions. That’s because Spectre, in addition to being a fishbowl, is a deceitful place.

There is a fish in the river that Edward thinks is a woman because it changes shape depending on the desire of the individual that looks at it. Here, we see Edward’s desire to find a woman.

For a fish to reach its maximum size, it can’t let itself be caught. Edward has to avoid all of the fishhooks that appear in his life. He has to avoid going back into the fishbowl, at least until he reaches his goals and learns his lessons.

But if the right fishhook comes along, we’re all in danger of falling into the trap. In other words, Edward dismisses fishhooks until he finds the right one. The fish that Edward talks about lets itself be caught by his wedding ring.

Edward’s fishhook was his wife, Sandra. But to get to that point, he had to overcome endless obstacles, leave his comfort zone, learn his lessons, and, at the end of his life, take off his shoes in a new comfort zone.

In spite of all that, Edward leaves Spectre without his shoes. In other words, he leaves unprotected because, in that moment, he will face the panic zone. At the end of our lives, we don’t need shoes anymore. We can settle in and leave them hanging on the wire.

Big Fish is a modern fantasy story that shows us another way of seeing life, of accepting it. Each one of us is capable of doing extraordinary things if we manage to conquer our fears, leave our comfort zone, and carve our own path.

“The more difficult something is, the more rewarding it is in the end.”

11 Inspiring Movies That Will Make You Want to Be a Better Person
Here are 11 movies that will inspire you to be a better person, movies based on true events or made up, but all of them real classics of inspirational film. Read more »