Beauty Is Not in Your Eyes, But in Your Gaze 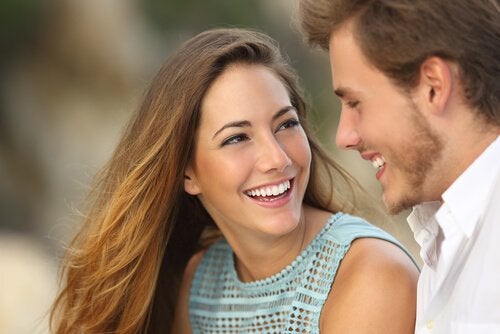 In Jhon Koening’s dictionary of dark emotions, he describes the emotion we feel when we cross paths with a person on the street and meet their gaze for a few seconds. It seems like they’re spying on us or that we’re peering at them through a hole in the wall, and that makes us feel vulnerable. That emotion now has a name: opia. Because it’s not someone’s eyes which radiate beauty, it’s their gaze.

When you are traveling by train, sitting in a restaurant or walking about town, you encounter many different kinds of people and sometimes exchange glances with them. Without even realizing it. Our gazes say a lot about us. They give us away when we’re sad, angry, in love, worried or tired.

“I don’t even know your name, I only know the gaze with which you tell me.”
-Mario Benedetti-

Discover what’s hiding behind a gaze

If we sit across from someone, ask them how they feel and they smile at us, maybe if we look them in the eye we’ll be able to see that their smile isn’t real. It doesn’t correspond with what they truly feel. Gazes are a part of non-verbal communication, and they teach us many things about other people.

Eye movements have been studied in Neuro-linguistic programming (NLP), which has called that eye language “the key to ocular access.” Bandler and Gringer, the founders of NLP observed many videos in order to decipher the meaning of ocular movements. They reached the clear conclusion that depending on the type of eye movement, people could be using different parts of their brain and different senses. Thus, there are four different processing systems:

“A soul that can talk with the eyes can also kiss with the gaze.”
-Gustavo Adolfo Béquer-

But not everyone works this way and sometimes different processing systems can be combined. So we have to be careful to not generalize. To figure out how someone works, we can ask them simple questions. For example: how do you picture your job in the future? That way we’ll see how they react to visual creations, and we’ll have a reference point from which to interpret their gazes.

The power of a gaze

A gaze can be interpreted in many ways, but it can also transmit many different feelings and emotions. The magazine Psychology Today published an article in 2014 about the power of gazes. The conclusions can be summarized into five sections:

If we stare at someone directly in the eyes, we generate a feeling of excitement. Although the interpretation of this gaze will depend of the context in which we find ourselves in. If someone we don’t know stares at us directly for a long time, we could interpret this as a threat or danger and begin to feel afraid. However, if someone we know and like does it, an intense gaze could produce sexual excitement.

Eyes can give away if a smile is honest or not

In order to distinguish between an honest smile and one that’s not, the psychologist Paul Ekman says you have to observe the person’s gaze. If a smile is honest and true, their eyes will squint and crow’s feet will appear at the very ends of their eyes.

If a person is interested in something or someone, their pupils will dilate. This dilation will make us look attractive. A study was conducted in which participants were shown two photos of a woman. In one of the photos, the woman’s eyes were artificially enhanced to make her pupils appear larger. The result was that the photo in which the woman had larger pupils was considered the more attractive of the two.

Researchers have found that gazing at each other in a mutually intense manner is a sign of reciprocal interest. A sustained gaze between two people that already know each other denotes admiration and love.

It’s always been said that people who are lying tend to look away. But in reality, someone who is lying puts all of their energy into making the listener believe them, so they look at their listener’s eyes even more intently. On the other hand, someone who is telling the truth doesn’t need to prove anything, so they may get distracted and look elsewhere than their listener’s eyes.

“Let me in, let me see how your eyes see me.”
-Julio Cortázar-

Link copied! Next
Interesting Articles
Psychology
What is Cultural Psychology?

Psychology
Strategic Thinking: How To Give Your Life Purpose

Strategic thinking is a concept that made a name for itself in the area of marketing. However, it is also…

Psychology
6 Emotionally Sensitive Responses We Can Give to Children

Whatever children are like, it is extremely important to give emotionally sensitive responses to negative comments they make about themselves. Above…