Autonepiophilia - Adults Pretending to Be Babies

Did you know that psychologists have identified over 549 different kinds of paraphilias? Among them is one of the strangest, called autonepiophilia. Keep reading to find out more about it! 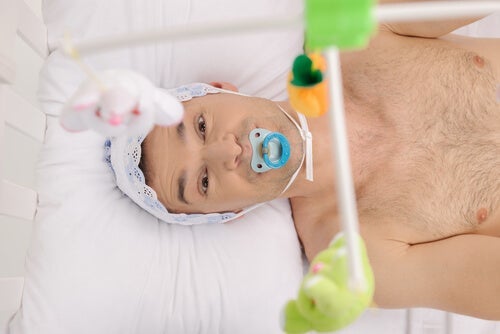 The world of paraphilias is astonishingly diverse. Researchers have identified as many as 549 different types of paraphilias. Some of them are more well-known than others, such as exhibitionism, voyeurism, or fetishism. Others, such as the subject of today’s article, are rarely discussed, but very interesting from a psychological point of view. Keep reading to learn more about autonepiophilia.

Autonepiophilia, or paraphilic infantilism, consists of feeling sexually aroused by wearing diapers, using other objects designed for babies, and behaving and being treated like a baby. Some people with this paraphilia even have babysitters or go to some kind of specialized childcare center. This condition is also known as adult baby syndrome.

It isn’t just about wearing a diaper and sucking on a pacifier. It goes much further than that. People with this syndrome often spend a significant amount of money trying to make their house look like a daycare. They also buy diapers and baby food. They might want their partner involved in their fantasy, so they ask them to hold them in their arms, “breastfeed” them, give them baby food, change their diaper, or play with them.

This syndrome is different from having a diaper fetish. For an individual with the latter, their pleasure comes from simply wearing a diaper. Diaper lovers (DLs) don’t behave like babies, nor do they want to be treated like babies. Nevertheless, adult babies are often also diaper lovers (AB/DL).

It’s important to make another important distinction. Autonepiophilia has nothing to do with pedophilia. Adult babies aren’t attracted to children, nor do they want to do anything sexual with them. For adults with paraphilic infantilism, being treated like a baby is what arouses them. Or they get sexual pleasure from wearing a diaper, getting changed, feeling the wet diaper on their skin, the humiliation of having to wear a diaper (in the case of diaper fetishism), etc.

How many adult babies are there in the world?

According to some estimates, as many as 1 out of every 1000 people like to feel like a baby. In fact, the British documentary 15 Stone-Babies says that there are somewhere between 200,000 and 500,000 adult babies in the United Kingdom alone! The exact number is hard to estimate because autonepiophilia can manifest itself in many different ways.

There are adult babies who are “out”, so to speak. Aside from their obvious physical differences, based on behavior alone, it would be hard to distinguish them from real babies. Other adult babies hide their condition and only act how they want to act when they feel safe or are being intimate with someone. Those people would be difficult to identify.

Whatever the exact number, there are more adult babies out there than most people would think. They have support groups, and often have meetings for people to share experiences, knowledge, ideas, material, etc.

There are also stores that specialize in products for adult babies and diaper lovers. These products are in surprisingly high demand. Adult babies tend to be heterosexual men, though the syndrome also occurs in women. Research shows that most of them have a family, are well-educated, and have formal employment.

The causes of paraphilic infantilism

Some psychiatrists relate this condition with Peter Pan syndrome. Individuals with Peter Pan syndrome aren’t willing to grow up or take on responsibilities. Instead, even as they get older, they continue to act like children. This stands in stark contrast to what we just said about many adult babies who have families and stable jobs. However, since it’s hard to identify all cases of autonepiophilia, it’s also difficult to relate the two conditions. The only thing we know for sure is that there must be more than once cause.

Perhaps the answer is that these people are simply looking for a way to relieve some of their stress. The best way they can find to do it, unfortunately, is regress to childhood or babyhood. The brain, after all, remains a mystery.

You can find articles on the Internet about paraphilic infantilism, though they aren’t usually very helpful because there isn’t a lot of research on the condition. If you really dig, you might find an interview with an anonymous “adult baby” who’ll talk about their strange way of life. The most available resource about autonepiophilia, however, are documentaries.

The British Channel 4 produced a documentary called 15 Stone-Babies and National Geographic made one about a man who lived as a baby. In Spain, the chain Cuatro put out an episode of the program Conexion Samanta called Adult Babies, which interviewed people with this paraphilia. And YouTube, of course, is full of videos on the subject.

In general, people with autonepiophilia don’t seek professional help because they can find ways to work their condition into their regular lives. The problem arises when it starts to get in the way of their day-to-day. It can be very difficult to find a significant other, for example, because they prefer a “mother” to an actual partner. There are people who are willing to engage in this kind of role-play, but they’re few and far between.

Many adult babies don’t think that society should label their behavior as a paraphilia. For them, it’s simply a way of life. Others do get sexual pleasure from acting like babies, so they might have to resort to hiring sex workers.

If the person with autonepiophilia is incapable of having sex if they aren’t acting like a baby, sexual relations will be hard to come by. After all, sex with someone who dresses as and acts like a baby isn’t socially acceptable.

The other thing is that while people with this condition don’t feel aroused by children, is the same true for people who have sexual relations with “adult babies?”

This is a controversial question. After all, the attraction could be very specific: you’re aroused by an adult dressed as a baby, you’re not aroused by an actual baby. This, however, is a very fine line, and it’s very easy to argue that this behavior is inappropriate, or even pathological. What do you think?

Exhibitionism: Causes of This Sexual Paraphilia
Exhibitionism, also known as "flashing", is starting to be recognized as a psychological disorder, especially when it interferes with everyday life. Read more »
Link copied!
Interesting Articles
Culture
Attention Control as a Key to Connect with the Present Again

We're not used to being present in the present. In most cases, your body is there, but not your mind.…

Work zombies exists in every professional setting. We recognize them instantly because they always appear to be very busy. However, in reality, all a work zombie does is delegate responsibilities to other…

Culture
What Animals Teach Us

We tend to think that human beings are different from animals, and we believe that we are responsible for teaching them. But it's actually the opposite! The lessons that we can…

Memory is very interesting. The mechanisms that trigger memories or cause us to remember or learn things are unpredictable and sometimes can't be…

Culture
No One is Indispensable

This is the story of Andrew, an extraordinarily talented accountant. Andrew was a brilliant and ambitious young man who wanted to be successful and indispensable in his job. He finished…

Culture
Meditation Can Renew Your Brain in 8 Weeks

Meditation can transform our brain in 8 weeks. It modifies the areas related to memory, empathy, and stress, as well as…