In today's article, we'll talk about frotteurism, a sexual disorder that seems to primarily affect men. 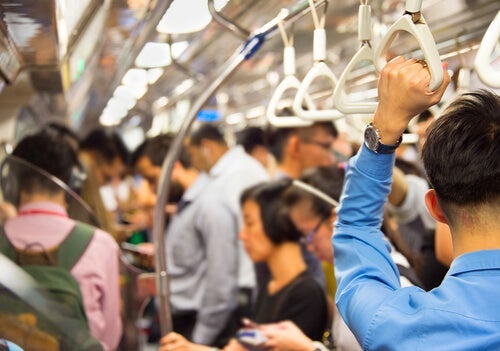 Has someone ever brushed against you with their genitalia in a crowd? Has someone ever tried to rub up against you on a bus? Unfortunately, this type of behavior is very common. It’s called frotteuristic disorder, and it can be very unpleasant or traumatic for its victims.

Frotteurs are individuals who seek sexual pleasure by rubbing their genitalia on other people in a pathological way. Today, we’ll explain the main characteristics of this type of sexual paraphilia and its possible treatments.

According to the Diagnostic and Statistical Manual of Mental Disorders (DSM-5), frotteurism is a paraphilic disorder. Individuals who suffer from these disorders use unusual objects or situations to engage in sexual fantasies, impulses, or behaviors in order to feel pleasure.

In the case of frotteurism, the unusual situation is the action, fantasy, or unstoppable desire to rub themselves on or touch another person without their consent. To qualify as pathological, it has to have been going on for at least six months. The person must also meet these conditions:

Some of the people who engage in this behavior don’t do so in a compulsive way and it doesn’t cause them significant suffering. They do it every once in a while, and they have other motives to do so. When this behavior isn’t pathological, it isn’t the individual’s primary source of sexual arousal.

It’s important to mention that rubbing on or physical contact with a significant other or involuntary contact with a stranger doesn’t qualify as part of a paraphilic disorder. For it to be considered a pathology, the person has to do it voluntarily and without the other person’s consent. Another condition, as we mentioned above, is that it needs to cause clinically significant suffering or be impediment to a person’s daily life.

The profile of a frotteur tends to be male, and they typically start this behavior as adolescents. They sometimes show signs of shyness, frustration, or feelings of inferiority. Other important characteristics are:

In most cases, people with frotteurism or any other type of paraphilic disorder don’t seek help. If they do, it’s because they feel profoundly guilty.

That being said, the best course of treatment for frotteurism is still up for discussion. Another unanswered question is what causes it. In fact, Scott Johnson and collaborators conducted a study that was published in the Journal of the American Academy of Psychiatry and the Law. They reviewed the available research on frotteurism and found very little. Thus, they concluded that a thorough exploration of the subject is crucial to find new answers to these important questions.

In conclusion, it’s important to keep in mind that understanding and being aware of the disorder is absolutely essential for treatment. It’s true that it often goes unnoticed, but that doesn’t mean it doesn’t cause problems. In some places, frotteurism is a crime. As a result, not seeking treatment for frotteuristic disorder could result in serious legal consequences.

Exhibitionism: Causes of This Sexual Paraphilia
Exhibitionism, also known as "flashing", is starting to be recognized as a psychological disorder, especially when it interferes with everyday life. Read more »

Psychology
The 5 Types of Procrastination

Some sayings we have in English aren't exactly right. In fact, there are plenty that are completely false, but others…

Psychology
The Insula, the Source of Our Emotions and Empathy

The insula is a region of the brain as mysterious as it is crucial to understanding human behavior. Some say…

Fibromyalgia was recognized as a disease by the World Health Organization (WHO) in 1992. Today, fibromyalgia affects 4% of the…