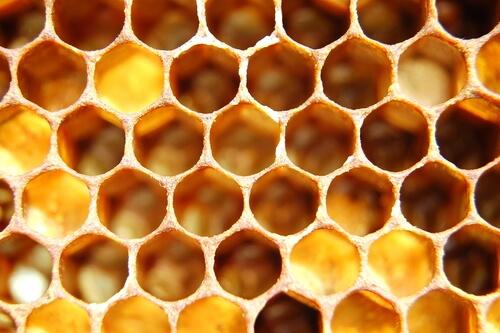 Trypophobia is an extreme fear or feeling of repulsion toward any pattern of geometric figures that are very close to each other. These figures can be small holes, rectangles, or convex circles. In fact, the word trypophobia literally means “fear of holes”.

This irrational fear is very common in humans, although we currently don’t know much about it. The fact is that millions of people state that they feel repulsion and anxiety when they see patterns of small holes that are close together.

What is a phobia?

Phobias are defined as an intense and irrational fear toward a person, object, or situation that is of little or no danger. The word comes from the Greek phobos, meaning “panic”.

In Greek mythology, Phobos was the son of Ares, God of War, and Aphrodite, Goddess of Love. He personified fear. Alexander the Great prayed to Phobos before each battle to keep fear at bay.

When we speak of trypophobia, we’re referring to a specific phobia characterized by fear or anxiety caused by certain objects or situations. We can call them phobic stimuli. In this case, they’re geometric shapes that are very close together.

Specific phobias, such as trypophobia, have the following characteristics:

Trypophobia isn’t considered an illness, but it could become one

People with trypophobia tend to have symptoms of anxiety when they see coral, beehives, soap bubbles, spotted dresses, bubbles, or a bunch of stacked logs.

Feeling aversion at the sight of these geometric figures or holes is not a disease. We consider it a normal and frequent fear in humans. This is because it prevents certain dangers such as contracting diseases or suffering harm.

Nevertheless, this irrational fear could come to interfere with our well-being or daily lives. It could hold us back from having a normal life. In this case, it would translate into a disorder which would have to be dealt with.

What are the causes of trypophobia?

The causes of trypophobia have recently been studied by the University of Essex and have been published in the Psychological Science magazine. The visual patterns that generate anxiety symptoms in people with trypophobia are similar to those caused by various poisonous animals.

So, trypophobia could have an evolutionary explanation. Those who feel disgusted toward these geometric patterns keep a distance from dangerous animals. This would help them survive and avoid being “poisoned or attacked” by these types of animals.

This explanation differs from the causes of other phobias since we learn most irrational fears. We learn to feel fear toward certain stimuli due to personal or external experiences. For example, it could be from observations or what people have told us. With that being the case, trypophobia’s origin doesn’t lie in a trauma. Nor does it have a cultural origin, as is the case with fear of the number 13 or triskaidekaphobia.

Aversion, fear, or disgust toward holes in organic matter is easy to explain. This happens because these images are often associated with diseases.

The symptoms of trypophobia are the same as those of any other specific phobia:

If you identify with the described symptoms, you may have trypophobia. Nevertheless, you should remember that only a specialist can diagnose you. If this is the case, then the best thing for you to do is to seek the help of a psychologist.

The treatment of choice for trypophobia is in vivo exposure to the feared stimulus. In this case, it would be to certain geometric figures or images. In some cases, it’s also useful to supplement the in vivo exposure with relaxation techniques.

We can use relaxation as a supplement to exposure. This is because relaxation itself has hardly any therapeutic effects in phobic disorders. Exposing yourself to these geometric figures or groups of holes means being in the feared situation. For example, coming near a certain plant or beehive.

One of the common problems in the treatment of phobias is the appearance of panic attacks. In this sense, it seems that practicing frequent exposure seems to be incompatible with them. Nevertheless, their probability of occurrence increases if the patient interprets the situation as catastrophic. In these cases, you should try to counteract these types of thoughts with other thoughts.

As we’ve seen, trypophobia is an irrational fear of different geometric figures or groups of holes. Like any phobia, it’s a disorder with a solution, as long as a mental health specialist treats it.

The 7 Most Interesting and Strange Phobias
Phobias are defined as an intense and irrational fear towards a person, object, or situation which supposes little or no actual threat. Read more »
Link copied!
Interesting Articles
Psychology
What is Agoraphobia? Symptoms and Treatment

Agoraphobia is a psychological disorder closely associated with anxiety.  Agoraphobia can exist without a prior history of anxiety disorder. However, these…

For many, falling in love is like a being on a carousel of nervous emotions that are hard to make…

Psychology
When Solitude Defines Me

Brain fog is very common in people who suffer from fibromyalgia. It is also frequent when we are under high…