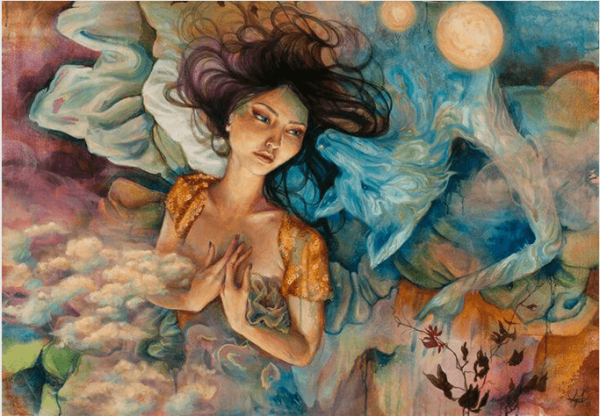 In our daily lives, it is rather common for us to feel stressed out or have anxiety. We carry out tasks too quickly, while also not wanting to stop to understand our surroundings. We need to get to the point that we have in mind without great delay and we leave loose ends along the road due to this, worrying too much…

In those moments, surely those around you do not stop saying that you need to stop and smell the roses. They probably even suggest that you have some anxiety problem because you are not finishing things and you need support to overcome it.

It is true that in order to enjoy a healthy and balanced quality of life, we need to stop and let ourselves enjoy it, but today I will tell you that those moments when you worry can also be signs of a heightened intelligence. Nevertheless, obviously, we must manage them healthily.

“Anxiety with fear and fear with anxiety contribute to a human being robbed of his essential qualities. One of these is reflection.”

The study published in Science Direct looks at the relationships between generalized anxiety disorder, depression, worry, and emotional management, and the levels of linguistic and non-linguistic intelligence, using for this a sample of 126 people.

The link existing between anxiety and intelligence

This study will be published next February by researchers Alexander Penney, Victoria Miedema, and Dwight Mazmanian from the Department of Psychology at the University of Lakehead in Canada. In this study, the scientists show us the existence of a relationship between anxiety, intelligence, and the state of mental rumination or worry.

It is worth pointing out that in numerous studies and research projects done before, the existence of a relationship between anxiety and intelligence had already been proven. On this occasion, the psychologists from Lakehead carried out a much wider study of the topic, reaching the conclusion that people who are often worried at high levels are much more intelligent.

“There are moments when all anxiety and stated toil are becalmed in the infinite leisure and repose of nature.”

In tandem, Jeremy Coplan carried out a study in 2011 where it was confirmed that high levels of worry in patients with generalized anxiety disorder are found to be related in a positive way to IQ levels. On the other hand, a positive relation is also found with the level of intelligence in people with low levels of worry who do not suffer from the disorder.

As a conclusion, we can agree that both studies confirm an intense relationship between intelligence and anxiety, confirming the idea that some people who have been able to develop greater talents and skills are more likely to suffer psychological disorders.

“Once I was beset by anxiety but I pushed the fear away by studying the sky, determining when the moon would come out and where the sun would appear in the morning.”

Social Psychology
Social Dramaturgy: How We Develop Masks to Interact

It's possible to analyze our interactions with others as if we were in a play. Namely, as if our social…

Psychology
Being Young At 90 or Old At 18