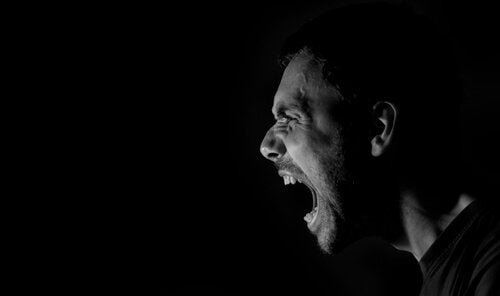 Frustration is a universal emotion which we all experience. Just like all of the other emotions, such as fear or sadness, it is necessary. It is an indicator that something is going wrong and that we should change it. Also, like with the rest of our emotions, it can make us behave aggressively.

However, at this point we have to identify, within the emotional state of frustration, the degree of intensity with which it manifests itself. Also, the way in which it is regulated. Some people feel a disproportionate amount of frustration in comparison to its trigger. Furthermore, they respond to this frustration in an exaggerated manner with explosions of rage and aggressiveness. They suffer from intermittent explosive disorder.

“Rage is an acid which can cause more harm to the object that contains it than to the one it is pour on.”
-Séneca-

What is intermittent explosive disorder?

We’re referring to a disorder in which the control over your impulses and your emotional regulation are affected. Also, we could say that it is characterized by two fundamental factors.

Intermittent explosive disorder is an obstacle

Not handling your rage well can have devastating consequences in the life of those who suffer from this disorder. Furthermore, it can also affect the people around them. This is due to the fact that controlling one’s aggressive impulses is a fundamental key to living within a society.

Most people who have this disorder have issues in their personal relationships, be it with family members, romantic partners or friendships. Living close to a person with this disorder means living in a state of constant tension. It’s impossible to predict when they will explode. This causes the people around them, who love and care for them, to end up putting some distance between them. They do this out of fear towards the explosions and outbursts, and the consequences they bring.

This disorder also affects the individuals’ work life. The individual doesn’t know how to control their outbursts, or how to prevent them. Thus, frustrating situations in the workplace sooner or later end up triggering a burst of rage. These situations could include discussions with coworkers or criticism from their superiors. Hence, these outbursts generate a bad work environment and a possible firing if the situation repeats itself enough times.

Why do some people have outbursts of aggressiveness?

Some studies indicate that the explosions of aggressiveness are the consequence of a deficit of serotonin in the brain, such as in lesions in the prefrontal cortex. The prefrontal cortex is precisely the part of the brain which is associated with impulse control. It is in charge of higher thinking.

Although this brings to mind biological causes, another aspect to highlight is that most of the people who suffer from this disorder have lived in environments when one or various people manifested outbursts of rage. This makes you think that, in addition to there being a biological predisposition, the education we receive throughout our childhood about how to regulate our emotions is also key.

If a child grows up perceiving unmeasured rage and violence as valid ways to obtain things, it is likely that these behaviors will persist. Also, they will be reinforced. It is necessary for minors to witness good examples of conflict resolution. Also, how to handle frustrations in a healthy manner, with patience and healthy dialogue.

Furthermore, it is important to help children understand their frustration and learn how to handle it. Especially if they have a tendency to make their complaints known through tantrums. Seek professional help if necessary. In doing so, we would be saving them from lots of problems in the future.

It’s never too late to learn more about your emotions and how to manage and control them. Through cognitive-behavioral therapy, you can get these people to identify the first signs of a bout of rage. Thus, they can stop it before it grows and causes serious damages. In order to stop them, you give them a set of alternatives, such as exiting the situation that is producing their frustration. This exit can be mental (diverting their attention) or physical.

Other aspects that help are practicing relaxation techniques. These reduce one’s general state of anxiety and overall activation tone. They do so by channeling that energy through the practice of some sport. In some cases, medication that regulates serotonin can also be of help.

The important thing is that we need to be aware that we have a problem and seek help for it. That way, we can learn to manage our rage and improve our lives, as well as the lives of the people around us.

“Upon crossing the door to my freedom, I knew that if I didn’t leave all of my rage, hatred and resentment behind, I would continue being a prisoner.”
-Nelson Mandela-

Do you know someone who suffers from this disorder or do you think that you suffer from it yourself? How does it affect your everyday life?
Link copied!
Interesting Articles
Wellness
The Dangerous Charm Of Secret Love

Love grows and ignites with greater force when it comes along with a large or small dose of impossibility. Passion…

Thinking about the fact that fear will never disappear can lead to anxiety. Just the thought of it makes your heart beat faster. It's something natural or, at least, understandable. Society has taught…

Bad moods are something quite natural for highly temperamental people. We all have bad times when it is difficult for…

Wellness
What to Do When You Experience an Emotional Block

Everyone has suffered from an emotional block at some point. It makes you feel like there's a wall that's keeping…