Why Anger is Poisonous For Our Minds and Bodies 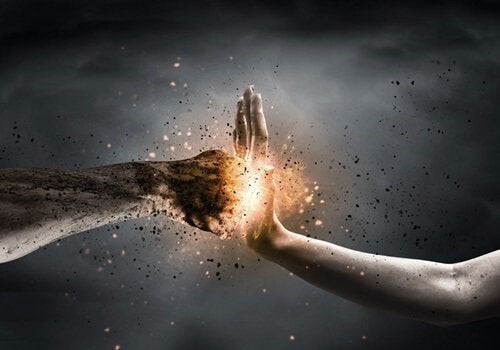 We’re only just born and we’re already filled with anger. And fear. And pain. We are born with these emotions already inside us, regardless of the circumstances of our birth. And from then on each of these emotions will evolve inside us, moulded by a multitude of factors. There are many different types of anger. Anger ranges from annoyance or irritation to a blind passionate rage that can, in the worst of cases, be incredibly destructive. It is, in fact, one of the most intense emotions that can be experienced. It is also one of the most damaging.

Whether it explodes outwardly or is retained inwardly, anger will always cause harm.

“The greatest remedy against anger is delay”
-Séneca-

As human beings we face a great paradox. We’ll always be prone to getting angry. It’s simply not possible to surgically remove this part of us. We must learn to deal with it – if we don’t we’ll end up suffering either mentally or physically. And the good news is that it’s totally possible. It’s possible to channel anger constructively. Competing, engaging, and taking risks are ways of doing this. If we don’t then our bodies will pay the price.

Both alternative and conventional medicine insist that all illnesses have emotional components. The holistic approach says that every illness is an unresolved emotion. When this emotion reaches its limits, it can cause our health to seriously deteriorate, and can even lead to death.

Each emotion has an impact on our body in some way. Anger is known to affect mainly the area of ​​the chest and stomach.

There are many types of anger. Resentment and hatred are two of these, and all have consequences for our health. They are like time bombs that end up causing gallstones, gallbladder problems and different digestive disorders.

Different types of anger and its effects on our bodies

Recently, researchers at the National Institute on Aging conducted an investigation into the effects of the different types of anger on our bodies. The conclusions of the study were published in the Journal of the American Health Association. They showed that those who are filled with anger always show palpable symptoms in their bodies.

Another effect of anger is that it causes the production of certain hormones to increase visibly, among them, adrenaline. The increase in this substance causes our body’s balance to be altered and this can eventually lead to heart attacks or brain disorders.

Don’t contain it … and don’t let it take control

There are always reasons to get angry, and usually every day. Nothing ever goes perfectly, and conflict and displeasure are never far away. To channel these feelings of rejection and irritation, the first important thing is to recognize that we are experiencing anger. That single fact already increases our chances of being able to channel its energy intelligently.

Anger has different facets. Here are the four main ones:

In turn, anger originates mainly from four sources: fear, frustration, doubt and guilt. Anger doesn’t resolve any of these. What it does do is give them a dangerous outlet. It produces a feeling of momentary release, but doesn’t eliminate the causes of the problem. It also has the aggravating consequence that it actually feeds itself. The more anger we feel, the more likely it is to  intensify and control us. That, sadly, is how it works.

The most healthy outlet is not to repress it or release it uncontrollably. The correct path to take is to accept that you are feeling anger and then confront it. This makes it start to defuse. It usually takes 10 seconds to accomplish this. We should then try and identify what is the real source of the anger. That will gives us clues as to how to solve the problem that lies behind the anger.

When Anger Makes Us Sick
Anger is one of the most powerful feelings a human being can experience. It comes in many forms: resentment, hate, intolerance, annoyance, etc. Read more »
Link copied!
Interesting Articles
Personal Development
How to Stop Reacting and Live a Creative Life

Beginning to live a creative life can be a major challenge. It means, above all, being able to break old patterns…

Wellness
The Heart Needs Vitamins A, B, C: Affection, Benevolence, and Countless Hugs

The heart demands nutrients and although it may sound a bit cliché, I know that mine needs vitamins more than…

Wellness
When Concern Keeps You From Taking Action

Concern is natural and common in all human beings. However, we often stagnate in concern, forgetting that perhaps taking action…

Wellness
How to Know If You're in an Overly Demanding Relationship

Influential journalist Walter Winchell said: "Never above you. Never below you. Always beside you". Although that seems logical, it's not…

Most of us have had nightmares at some point or another. They're dreams that are full of scary things. They make you feel scared and anxious. What usually happens is that you…