Villa 21 was an interesting anti-psychiatry experiment that focused on giving mentally-ill patients greater autonomy. The goal was for them to be able to heal in an environment that valued them as active players in the process. 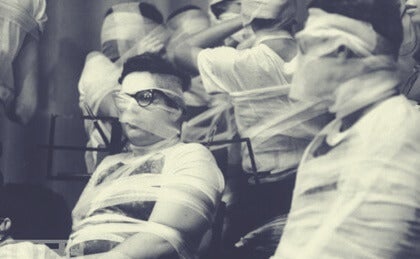 In the 1960s, David Cooper conducted an anti-psychiatry experiment called Villa 21. Although the results were encouraging, for some strange reason, few psychiatrists have ever defended the study. Money might be the reason why so many mental health professionals essentially ignore the results. After all, it’s more profitable to medicate mentally-ill patients than to use other types of interventions. The first requires nothing more than a doctor and some pills, while the second requires more staff, more time, and thorough analyses.

Unfortunately, there are many prejudices against mental illness, in spite of all the information available today. For example, many people believe that patients with schizophrenia or bipolar disorder pose a threat to those around them. However, the World Health Organization’s own statistics indicate that only 5% of patients with that diagnosis actually engage in violent behavior. The percentage for so-called “normal” people is 10%.

For a long time, the treatment for mental pathologies has centered on finding ways to repress emotions and behaviors. In other words, using pharmaceutical drugs to reduce emotional intensity and shorten patients’ stays in psychiatric hospitals. David Cooper, a South African-born psychiatrist, was strongly opposed to these methods. Instead, he advocated for a more humane approach, and one result of his work was an anti-psychiatry experiment called Villa 21.

David Cooper developed a theory about insanity from a phenomenological and existential perspective. The ideas of Herbert Marcuse, a German-American philosopher, influenced Cooper. His theory was based on the idea that mental illness was physical in origin, and he argued that social factors were primarily responsible for people’s breaks from reality. These principles formed the foundation for his anti-psychiatry experiment.

Cooper believed there were three kinds of insanity:

Cooper always believed that it was possible to cure these pathologies. Unlike traditional psychiatry, he never thought they were chronic illnesses. Instead, he believed that the right treatment could help any patient overcome their mental illness. Ultimately, this was his goal with the Villa 21 experiment.

Villa 21 and the anti-psychiatry experiment

Cooper managed to convince a large mental hospital in London to assign him a particular section specifically for his experiment. He called his section “Villa 21”. The foundational idea for his project was that young people and teens shouldn’t be mixed with patients who had already spent years “imprisoned” in the hospital.

Thus, he convinced the hospital to let him open a special section for young people and teens. He then organized a therapeutic community that was independent and autonomous from the rest of the hospital. Villa 21 was small, with only 19 beds, while the hospital as a whole had a 2,000-bed capacity. All of the participants were people who had been diagnosed with schizophrenia for the first time.

Cooper chose his staff with similar criteria in mind. He chose young doctors and medical assistants with relatively little experience in mental hospitals. He wanted them to easily adapt to the new approach and not bring their past prejudices with them.

An experiment with very interesting results

In Villa 21, Cooper and his staff encouraged autonomy. Patients had a relatively wide margin of freedom to make their own decisions. Cooper avoided making rules in situations where flexibility was possible. The patients decided on what kind of activities they would do within the unit.

The staff also tried to emphasize group dynamics. There was always a health professional present during group activities, but they were just there to facilitate and make suggestions. The patients decided what they wanted to do and how they would do it. Within these groups, a series of work sub-groups emerged. Their structure was horizontal rather than hierarchical.

At first, the new method was rather chaotic. Nevertheless, over time, the patients established a stable and functional organization. The patient-led structure proved very beneficial to the Villa 21 participants. The experiment ran between 1962 and 1966, during which 42 patients participated. All of them were discharged in less than a year and only 17% had to be re-admitted. Unfortunately, the anti-psychiatry experiment was canceled, but it has been an important model for subsequent research.

The Renaissance Of Anti-Psychiatry
Antipsychiatry was a movement which protested against psychiatric methods in the 60s and 70s. Read on to see whether it still has a voice today. Read more »
Link copied!
Interesting Articles
Experiments
Optography: The Macabre 19th-Century Science