Akathisia: The Inability to Stay Still

Akathisia is sometimes confused with restless legs syndrome. It has the same symptoms. However, its origin is very different, as it's the side effect of certain drugs. 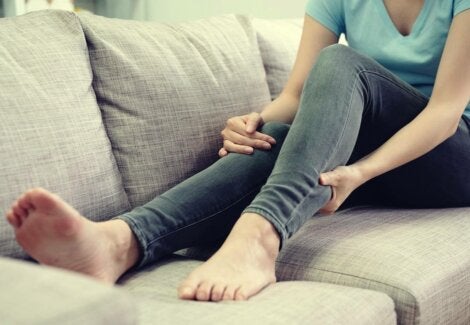 Nervousness. The inability to stay still for a long time. An intense need to always be on the go. Malaise and a feeling of vertigo. Contrary to popular belief, akathisia isn’t related to restless legs syndrome, as it’s the side effect of various specific (and frequently prescribed) drugs.

On many occasions, people find themselves obliged to take certain medications and tend to ignore every single effect they may have on them. As a result, many individuals experience a specific ailment that torments them, which leads them to go to their doctor, only to find out that it’s a side effect of a drug they’re taking.

As you can imagine, confusing drug-induced alterations are related to all kinds of diseases. Akathisia is one of them. It refers to an adverse, bothersome, and disabling manifestation that’s often misdiagnosed as restless legs syndrome. This confusion is so common that, many times, individuals end up receiving treatment for this neurological disorder when they don’t need it at all.

Of course, this treatment makes no difference whatsoever. For this reason, it’s important to always take into account more factors, more origins that have that uncontrollable need to move as a trigger. Let’s expand on this a bit more.

Akathisia is a movement disorder that prevents a person from staying still. It actually entails a much more intense and problematic situation than restless legs syndrome. The reason for this is that the need to move doesn’t focus only on the lower extremities but it affects the whole body. As you can imagine, not being able to stop moving is exasperating.

Therefore, this condition comes with various psychological symptoms. Evidently, this physical restlessness affects emotions in many ways. For example, the anguish due to not being able to be still and adopt an adequate posture while working is quite bothersome. Also, these people are unable to drive or lie down to fall asleep. In addition, this disorder affects people of all ages; it all depends on the effect that certain drugs have on the body.

Some patients undergo treatment to relieve something as simple as dizziness and vomiting. Little do they know that a drug is causing it. It isn’t necessary to suffer from this condition to imagine how irritating it must be to tap your fingers on surfaces nonstop or be unable to keep a job because you can’t focus.

The symptoms of akathisia

Neurology is the area responsible for studying this type of alteration. Although it’s true that it’s quite common to confuse this disorder with restless legs syndrome, we’ve already pointed out that the symptoms of akathisia are much broader. These are the most common characteristics of this condition:

We mentioned this at the beginning of the article. The etiology of this movement disorder is the side effect of certain drugs. The origin almost always lies in the treatment of antipsychotic medications and also in antidepressants such as selective serotonin reuptake inhibitors (SSRIs).

Likewise, many patients have suffered akathisia due to medications for the treatment of vomiting and dizziness. Additionally, it’s common for akathisia to appear in patients with Parkinson’s disease, as a consequence of the dopaminergic treatment itself. However, we must note that this side effect doesn’t appear in all patients.

These manifestations usually come when the administered dose of the drug is high. Thus, this condition is common in people who take first-generation and second-generation antipsychotics, such as haloperidol and risperidone.

The process of diagnosing akathisia

In general, when a patient’s undergoing treatment with psychotropic drugs, the medical professional’s first intuition is that these symptoms may be the effect of the medications. However, doctors also must bear in mind that some people do present adverse reactions to classic antidepressants or even to a pill for dizziness. For that reason, physicians are extremely careful when studying these cases.

Let’s see the diagnostic criteria that doctors usually follow to determine the presence or absence of akathisia:

What’s the treatment for this movement disorder?

Unlike restless legs syndrome, akathisia has a good prognosis. In fact, reducing the dose of that drug or withdrawing it completely is usually enough for the symptoms to cease. The problem here is that certain patients need to maintain their treatment with antipsychotics and in high doses.

In these situations, doctors must assess the possibility of offering another drug with similar properties. Thus, it’s only a matter of trying different options until finding the one that best suits the patient’s needs.

To conclude, learning about this type of disorder and alteration leads us to an obvious fact. On many occasions, a person’s well-being and health depend on drugs. Nothing is as dangerous as self-medication. It’s vital to always have good medical care and not neglect the appearance of possible adverse effects.

Restless Legs Syndrome: A Very Common Neurological Disorder
Restless legs syndrome is a very uncomfortable tingling and itching sensation in the legs and the need to move them to get relief. It doesn't just affect a person's sleep, but also has a marked impact on their emotions. Read more »
Link copied!
Interesting Articles
Illnesses
Williams Syndrome: Symptoms, Causes, and Treatment