Ahimsa: The Philosophy of Integral Peace

The term 'Ahimsa' refers to integral peace that advocates nonviolence and respect for life. 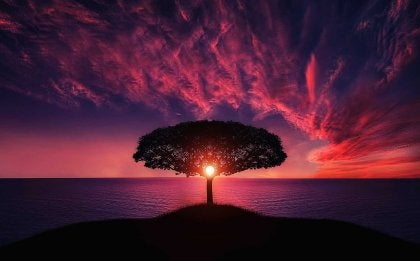 The term ‘Ahimsa’ literally means do no harm. Furthermore, it refers to a philosophy of integral peace that advocates nonviolence and respect for life.

Integral peace doesn’t just stand for “not killing” but also for not causing physical or emotional pain to any living being, either through thoughts, words, or actions.

The term dates back to 5th century BC in the context of Indian philosophy. Most specifically, in the Upanishads or Hindu texts. However, it was also used in Buddhism and Jainism.

Ahimsa refers to respecting the spirit, nature, and all cultures. It means to lead a life of integral peace with everything that surrounds us. In a way, this term represents the congruence between what we say, think, and do in terms of giving love and finding harmony within the world.

The concept of integral peace in the West

Mahatma Gandhi was the precursor of this philosophy in the West. Moreover, he considered it the common denominator of all religions, including Islam. However, over time, many leaders and civil rights advocates implemented it as part of their doctrine.

For example, Martin Luther King Jr, the biggest civil rights advocate of the African-American population, was influenced by this concept and became the torchbearer of pacifist protests against violence and poverty worldwide.

However, ‘Ahimsa’ became popular in the West thanks to various ancient practices such as yoga and meditation.

Subsequently, many Westerners ventured into new philosophies. In fact, Nonviolent Communication (NVC) developed by Marshall Rosenberg in 1960 is a take on the concept of integral peace.

The meaning of integral peace for Mahatma Gandhi

Mahatma Gandhi’s ideology of integral peace stems from his penchant for Hinduism and Jainism.

“Ahimsa is the highest ideal. It is meant for the brave, never for the cowardly. Ahimsa is the eradication of the desire to injure or to kill. Ahimsa is an attribute of the brave. Cowardice and Ahimsa don’t go together any more that water and fire. True Ahimsa should mean a complete freedom from ill-will and anger and hate and an overflowing love for all.“

Thus, for Gandhi, Ahimsa means “don’t kill,” although it also refers to the human capacity to not harm others at all. In general, not to cause any kind of pain, including emotional pain.

Henceforth, in order to achieve this, one must be in a state of absolute consciousness. Likewise, Mahatma affirms that anyone who practices Ahimsa should have absolute peace of mind regarding their past actions.

On the other hand, it’s definitely valid to emphasize that, for Hinduism, the fundamental objective of integral peace is to avoid the accumulation of bad karma. Therefore, individuals must be in a state of complete peace, not only with themselves but with the environment that surrounds them.

In other words, by having absolute respect for life, an unconditional veneration for nature is established. The individual will be at peace with themselves, with others, and with their environment.

Ahimsa is a principle of equality, respect, and balance in which nothing matters more than life in any of its forms or origins.

Ahimsa: A global and humanistic practice

Thinking about others’ welfare and not damaging it is a principle of supreme equality and integral peace.

If it’s related to cultural and humanistic practices, then respect for all cultures is equally established.

For a long time, violence towards other cultures has been justified. Moreover, ethnocentrism is a false notion of superiority, besides being a way to dominate and steal from others, concealed in unfounded reasons.

Establishing new cultural equality parameters is a way to reduce the level of suffering and centuries of abuse at different scales: social, economic, political, educational, psychological, and obviously cultural.

Although others are different, they’re still equal. In fact, we all have the same rights. This is what Ahimsa is all about: integral peace to everyone on the face of the Earth.

A Buddhist Story about Patience and Mental Peace
Often, we have a bad habit of wanting almost everything instantly. This Buddhist story will teach you the importance of patience. Read more »
Link copied!
Interesting Articles
Cinema, Television, and Psychology
Chicago - The Price of Fame

Recently the media announced that Steve Jobs forbade his children to enjoy the use of some of his greatest creations, such as…