Do you feel opposing emotions like love and hate at the same time? Are you confused about why this happens to you? Well, we're here to tell you that feeling this affective ambivalence is part of the complexity of being human. 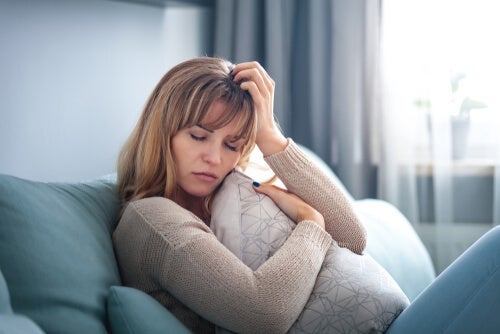 We have all suffered from affective ambivalence at some point in our lives, as we’re complex beings full of emotions, feelings, and contradictions. It’s a state in which it’s possible to feel joy and sadness at the same time, as well as to love and hate a person at the same time.

Have you ever loved someone and felt an enormous resentment for the way they treated you? Have you ever experienced feeling joy at seeing a relative, but a certain sadness due to their behavior?

Affective ambivalence is a part of the human emotional range. When we balance it correctly, we can consider ambivalence to be adaptive.

This is because feeling opposing emotions can actually help you to make decisions about certain questions or doubts you may have, and to face situations that generate conflicts. However, living full of contradictions and doubts tends to generate anguish and discomfort.

So what makes you feel affective ambivalence? What’s the origin of these opposite emotions? Are you aware of the reasons that make you feel this way? Are you influenced by family patterns and experiences? These questions highlight the enormous emotional complexity of human beings, as highlighted by Daniel Goleman in his theory of emotional intelligence.

The concept of ambivalence

Bleuer was the first to adopt this term in 1911 to refer to the state of mind in which two opposite emotions coexist, such as love and hate.

Ambivalence is defined as a state of conflicting emotions where we experience thoughts and emotions that are opposite in nature. This ambivalence feels quite unpleasant when you perceive two contradictory emotions at the same time.

Where does affective ambivalence come from?

We start from the assumption that our way of feeling and thinking is associated with our knowledge of the world, and how we experience it. Serge Moscovici, in his theory of representations, explains that human behavior is governed by a code which governs everything that happens to it. People attach a meaning to everything they experience.

Similarly, according to systemic trends, the way human beings experience what surrounds them is influenced by one essential factor: the family. The family system transmits certain information, either unconsciously or consciously, about the world and how to behave in it.

In short, we can affirm that our way of relating to emotions and our thoughts are closely related to two fundamental elements: the family system and our own beliefs based on our own knowledge of our surroundings.

The family system, a key factor

According to Salvador Minuchin, the family is a system formed by a network of relationships that, in turn, form other subsystems. It’s conceived as a system that’s different from the sum of its parts. It goes through a life cycle, evolving through different stages and adapting as it goes.

Each family has implicit norms, rules, patterns, limits, and hierarchies that determine its adaptation and functionality. A pattern is made up of three areas: thoughts about the world, emotions connected to those thoughts, and, finally, the behavior that results from those two previous areas.

Consequently, the education we receive in our family system intrinsically transmits to us certain habits and beliefs that we get accustomed to.

Have you ever noticed certain patterns in other people’s homes that are different from yours? We’re sure that you’ve heard friends speaking about things that happen in their home that would be unthinkable in yours.

What do I really want to do? Surely you’ve asked yourself this question at some point. In the same way, you’ll have also wondered what they expect of you. Throughout your life, you acquire knowledge about the world and make decisions accordingly. Some examples of this are what you want to be, where you want to live, and who you want to love.

Conflict arises when what you want contradicts your family’s preconceived ideas or patterns. What you thought was the right thing to do may no longer be so. Furthermore, you no longer believe some of the things your family drummed into you.

On the one hand, you feel you should do it, and, on the other hand, a part of you says not to do it and you feel like you’re living a lie.

Living in a state of constant contradiction

Contradictions paralyze you, and produce great emotional discomfort. Feeling ambivalent alters your psychological balance. The wear and tear it produces overwhelms you and you don’t know which way to turn, overcome by your feelings. This constant state of indecision exhausts you and affects your self-esteem and state of mind.

Life is full of decisions and it’s quite normal to feel afraid and stressed when facing them. However, when this uneasiness floods your emotions, then you just don’t know what to do.

As Goleman said, “Each emotion predisposes us to act in a different way; each one of them points us in a direction that, in the past, allowed us to adequately resolve the innumerable challenges our human existence had been subjected to“.

This is why even affective ambivalence must be listened to and managed.

I Don’t Know How To Feel: Why it Happens
Emotions are usually automatic responses to external factors, but this isn't always the case. Sometimes we just don't know how to feel. Read more »
Link copied!
Interesting Articles
Emotions
5 Feelings that Seem to Be Love but Aren't

Feelings aren't completely precise. In fact, human beings are known for their ambiguities, contradictions, and inaccuracies. That's why it isn't…

Emotions
Self-Empathy: How to Connect with Yourself

How are you feeling today? How do you feel right now? Do you need anything? What are you longing for?…

Emotions
Feelings of Guilt and Their Connection to Anxiety

Feelings of guilt are a fairly common symptom of anxiety. Those who suffer from this condition draw quite harmful conclusions…