Do you feel affection ambivalence? Read this article to find out. 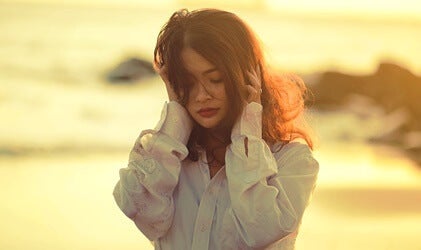 Affection ambivalence is a representation of the complexity of human beings. It’s being capable of hating and loving at the same time. It’s also feeling affection and deception and excitement and sadness at the same time. Actually, these are as frequent as they are normal.

Affection ambivalence is a type of complex emotion of contradiction and tension. One example is when you love and hate someone at the same time. This means that you can have a great affection for the person close to you but resent them at the same time. Even though you want to be a friend, you’re in pain.

Why do people have these conflicting and adverse feelings on more than just one occasion? Is this is normal or is it some time of imbalance? The fact of the matter is that this reality is perfectly normal. At the same time, it involves the immense complexity of human beings when it comes to emotions.

Not surprisingly, this topic is of great interest to the scientific community and there have been multiple investigations and studies pertaining to this topic. It seems like something out of a novel for neurologists, psychiatrists, and experts in emotional psychology. Thus,it shows that it’s a fact of how intricate the fabric of your emotions can be in your relationships.

Authors such as Frenk van Harreveld of the University of Amsterdam conducted a study on it. They concluded that affection ambivalence not only determines what you feel, but it’s also an internal complexity that pushes you to act in certain ways. For example, there are women who experience emotional ambivalence post-postpartum.

They love their new baby, but suddenly feel a chaotic mix of emotions of exhaustion, rejection, tenderness, and fear that define those first months of motherhood.

“You know that when I hate you, it’s because I love you to a point of passion that unhinges my soul.”

Affection ambivalence: characteristics that define it

Whether suffering or enjoying it, affection ambivalence is the feeling of all human beings at some time in their life. Regarding emotions, names like Daniel Goleman or Paul Eckman probably come to mind. However, it’s worth mentioning that it’s been studied since the beginning of the 20th century.

Eugen Leuler discovered affection ambivalence in 1911. At that time,  he described it as a simultaneous presence of two opposite feelings, which are attraction and repulsion. This amounts to two conflicting directions of will.

Since then, the field of psychology has taken a continuous interest in a topic that seems like two different areas. Despite the fact that affection ambivalence is so common in relationships, the area of social psychology has become interested in it in recent years.

What’s the reason for this? Many of the decisions that people make are contradictory. For example, you want to buy this, but you can’t right now. Or you want that job in a different country, but you don’t want to take the risk of leaving your home.

Affection or emotional ambivalence generates extreme unrest. Unfortunately, the energy and the wear of this type of dissonance are immense. So much so that, sometimes, you’re even stymied by those feelings. Suddenly, you become aware of the great love or affection that you feel for someone or something. At the same time, you feel exhaustion, rejection, and even hate.

You may love someone but detest their behaviors and attitudes, including the way they treat you. At the same time, remember your adolescence. That vital stage of your life is a constant contradiction in search of experiences. For instance, there’s fear, anxiety, desire, intensity, and anguish at the same time. It isn’t easy to cope with these types of internal contradictions and we’re all aware of that.

We all know that affection or emotional ambivalence is synonymous with contradiction. However, there’s a positive effect in this. This is the fact that makes you decide, clarify, or even accept certain situations. For example, mothers who experience postpartum little by little accepts their new realities.

When you love and hate someone at the same time, it causes you to understand the reality of this feeling. Is love more important than hate? Is this contradiction natural? Or is hate a fact that you should be aware of to make decisions?

Dr. Laura Ress of the University of Michigan conducted a study in 2013 that yielded interesting results: affection ambivalence encourages self-awareness. That uneasiness is something that the brain needs to appease and resolve. In fact, it’s been shown that this type of contradiction boosts your creativity. It also makes you look for ways to think and discover what you believe at the same time. Maybe you’ll come up with original answers to resolve the contradiction.

In conclusion, when you see yourself in this type of personal labyrinth, it’s a good idea to stop, listen, and understand. Perhaps there’s something that you need to deal with or resolve.

Life itself is a contradiction and emotions even more so. Obviously, loving isn’t easy and requires great responsibility.

Culture
5 Benefits of Practicing a Hobby Together

Sometimes we don't spend as much time with our partner as we'd like. Work takes up a lot of our…

Culture
Feeling Underappreciated: What Can You Do?

"I feel underappreciated, both at work and at home." Many people experience this feeling at some point in their life.…

Psychology Today
Active Ageing - What Is it About?