The Advantages and Conditions of Bilingualism 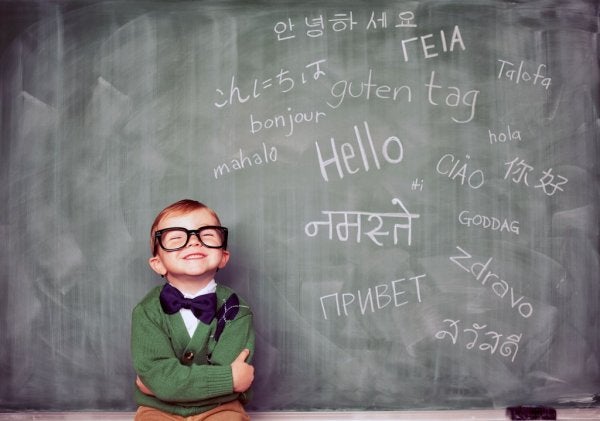 From the point of view of the psychology of language, bilingualism is something very positive. However, people didn’t always think this. Until the 60s, people thought that it hindered children’s intellectual development. It was believed that they had to simultaneously translate everything they heard and read to both languages and that this was a waste of time and effort.

It’s been proven that instead of jeopardizing our learning process, bilingualism actually benefits it. The advantages of bilingualism are obvious, not only in children, but in adults as well. Learning a new language slows down cognitive impairment.

“To have another language is to possess a second soul.”

The emergence of bilingualism

Historical and cultural factors have contributed to the rise of bilingualism the most. More specifically, those factors related to the opening and the establishment of new borders between countries, such as the following:

The importance of the mother

The relationship between mother and baby is the prototype of communicative exchange par excellence. For months, the mother interprets the signals that the baby sends her (crying, screaming, laughing), which she translates into words.

Little by little, the adult starts becoming some kind of mirror for the baby. When the mother makes a sound, the baby reproduces it. When she makes a gesture, the baby tries to imitate it. That way, a ludic exchange starts developing, which helps the baby understand and expand their knowledge of the world progressively and illimitably.

Therefore, the interaction between mother and baby is what determines the apparition of the language and the child’s level of it. The types of communicative interaction produced between the two continue to modify and evolve as the child grows.

“One language sets you in a corridor for life. Two languages open every door along the way.”

Proper bilingualism is very hard to achieve. There’s always a language that’s more developed and that has more importance than the other. The more similar the native and the foreign language are, the easier and faster the learning process will be.

Factors and conditions of bilingualism

There have been studies on 6-month-old babies that have used filtering techniques to prove the early precocity of bilingualism. The conclusions were surprising. When babies are only half a year old, they’re able to distinguish their first tongue from a foreign one.

This doesn’t mean they’re able to distinguish the phonetic details of the language. However, they do know how to distinguish prosodic information (intonation, rhythm). This makes 6-month-old babies potentially polyglot. Keep in mind that this ability diminishes with age since it’s not considered a necessary skill for survival.

According to Mariscal, a series of social, cognitive, and linguistic circumstances must be given in order for bilingualism to be positive for the child:

According to numerous studies, the prefrontal and dorsolateral cortex of children who fluently speak two languages are more developed regarding executive functions. This allows them to be quick and efficient in determined tasks where they need these superior skills.

Additionally, they tend to better discriminate environmental stimuli, making it easier for them to ignore the noise in the classroom. That way, it’s easier for them to focus on what they’re studying. They also tend to have a greater mechanism of brain control that allows them to “cushion the effects of age”, delaying their intellectual deterioration.

As you can see, the advantages of speaking more than one language are not limited to linguistics. Being able to effectively unfold in an intercultural and multilingual environment is the result of knowing how to take advantage of the adaptative opportunities that nature offers us.

“You live a new life for every new language you speak. If you know only one language, you live only once.”

Egocentric Language – What Does It Mean?
Many kids under 6 years old seem to have a spontaneous, egocentric language that influences their development. Check out this article to learn more! Read more »
Link copied!
Interesting Articles
Psychology
We Are What We Think

To follow the success of the book We Are What We Eat, we going to present you with the psychological version: we are what we think. It's certainly a quite…

Psychology
Use the Hanlon Principle to Communicate Better on Social Networks

Social networks have revolutionized our way of communicating. A few years ago, it was unthinkable for us to talk to…

Life is a wonderful journey that's constantly changing. Everything has a beginning and an end, and things that were there yesterday might vanish tomorrow. Accepting this reality allows us to live in the…

Psychology
How Can I Cultivate a Strong Will?

Ideally, we wouldn't need to have an iron will. We would swim only in rivers that have a favorable current.…