Cognitive Reserve: A Decisive Step Forward in the Evolution of the Brain 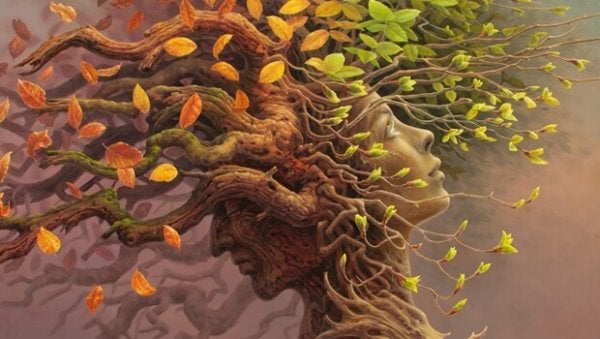 Cognitive reserve is a concept that arose in neuropsychology. It refers to the ability of brain structures to respond to the loss of brain abilities or other negative changes. In other words, cognitive reserve is the brain’s ability to react functionally to a disease, old age, or deterioration. This ability allows the brain to compensate, up to a point, any damage suffered.

High cognitive reserve can sometimes allow the brain function normally after an illness. It can also keep the brain fully active, even with natural deterioration due to age. As you can see, it is a very important capacity that’s worth cultivating and maintaining.

“As long as our brain is a mystery, the universe, the reflection of the structure of the brain will also be a mystery.”

The origin of cognitive reserve

Cognitive reserve starts forming as the brain develops in the womb. It is known that the experiences of a person’s first years of life are decisive. They define, to a great extent, the course that the development of intelligence will take.

There is reason to believe that genetic factors influence the formation of cognitive reserve. However, this aspect is not definitive. There are ways to stimulate the brain to increase this capacity throughout life. In fact, it can be increased even after brain damage has occurred.

When you have good cognitive reserve, the brain is able to make new connections between neurons and replace damaged ones. This process is much easier for those who have previously performed some of these activities or have any of these characteristics:

A healthy diet also helps maintain a strong brain. Smoking, drinking, and psychoactive substances should be avoided. Hiking is another favorable factor.

David Snowdon, doctor of epidemiology and professor of neurology at the University of Kentucky, conducted an impressive study in 1986. He took a research group of 678 Catholic nuns from the United States. It was a very uniform group: they ate the same foods, lived in the same environment, and carried out similar activities.

He monitored their cognitive reserve for 17 years. During this period, they were regularly tested and data was gathered on genetics, intellect, and psychology. All of them accepted that their brains would be studied after their death to complement the information from the experiment.

Sister Bernadette’s case was the most remarkable. She died at 85 years old and researchers studied her brain after death. During this postmortem study, it was discovered that she suffered from Alzheimer’s disease. However, during her life she did not show any symptoms. The researchers concluded that her cognitive reserve had clearly compensated for any physiological deficiencies.

The researchers also discovered another interesting fact. The nuns with richer vocabularies showed less cognitive decline over the years. That vocabulary, in turn, came from the fact that they had been good readers during childhood.

This experiment is one of the most compelling pieces of evidence in favor of intellectual, social, and physical exercise as valid ways of delaying the natural decline of our cognitive functions.

5 of the Worst Foods for Your Brain
Having a healthy brain depends on many different factors. The most important two are exercise and oxygenation. However, the foods that we eat play Read more »
Link copied!
Interesting Articles
Psychology
Closed for Mental Vacation

Many of us want a few days free from worries and schedules so that we can relax and let go of that built up stress. We leave things hanging for those…

Imagination opens the door to fantasy, but it also distances us from reality and takes us out of the present…