Acalculia: The Inability to Understand Numbers

Acalculia is the loss of the ability to perform simple mathematical calculations. In this article, we'll discuss the disorder, current intervention option, and how it differs from dyscalculia. 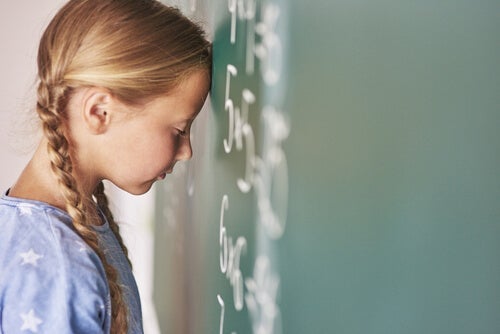 Imagine for a moment that you can’t understand simple numbers and calculations such as 2 or 2+2. This mathematical skill disorder, called acalculia, was first described by neurologist Salomon Henschen in 1925 and continues to amaze the scientific world.

Did you know that a specific area in your brain does mathematical calculations? It’s sort of like an internal calculator. Thus, this is a deficit that directly affects calculation abilities. Acquired brain injury causes it, it’s not something that people are born with.

There are two broad categories of this disorder. The differences between them lie in the affected skills and location of the brain injury. In general, patients with acalculia have some kind of damage in the left hemisphere of their brain, which is the logical reasoning side. The classification also depends on the degree to which the injury affects the patient’s abilities.

Primary acalculia is when the calculation impairment isn’t related to other disorders. Patients with this disorder lose the ability to understand numbers or combinations of numbers.

The main problem is executing operations. They also have problems with abstract issues such as the use and interpretation of signs. The brain injuries that cause primary acalculia are usually in the frontal lobe of the left hemisphere. Scientists consider this lobe the orchestra director of the brain. Consequently, alterations in the frontal lobe can leave patients unable to switch back and forth between mathematical concepts. There are two clear symptoms of primary acalculia:

This is an alteration of mathematical abilities associated with other neuropsychological disorders. Thus, secondary acalculia might come from linguistic, spatial, or executive function impairment. The different possibilities are grouped into the following categories:

How to Diagnose Primary Acalculia

The most important thing is to see if the symptoms are oral as well as written. Patients with primary acalculia lose their concept of numbers, but doctors sometimes confuse their symptoms with other aphasic problems. It’s important to observe the origin of the impairment. Is it due to concept loss? Or a failure to comprehend verbal instructions?

Why do patients with frontal brain injuries have problems with numbers?

First of all, solving numerical tasks requires integrating different mathematical concepts. To solve an addition problem, for example, you have to understand the concept of adding. Secondly, most math problems require abstract reasoning skills. The lack of inhibition in syndromes from frontal lobe injuries makes this process difficult because patients have trouble concentrating.

Lastly, poor integration of the visual and/or auditory stimuli affect the selective attention and sequential integration that numerical operations require. As we mentioned before, the frontal lobe is the director of your brain’s orchestra. If it fails, it’s harder for your brain to have the information that it needs to solve problems.

Acalculia and Other Afflictions

People with aphasia might suffer from acalculia in addition to having linguistic problems. For patients with Broca’s aphasia, for example, the impairment manifests itself in the syntax applied to calculations. In alexic acalculia, however, the impairment correlates to reading problems.

Another example is pure alexia, where verbal and literal interpretation problems of the written language are evident in the incorrect interpretation of numbers, sizes, and hierarchies.

Other Ways to Detect the Disorder

In agraphia, acalculia sometimes is related to the inability to write quantities. Consequently, the type of acalculia will depend on the type of agraphia.

Patients with Wernicke’s aphasia make mistakes when they copy dictated numbers. To deal with their verbal comprehension problem, said patients tend to invent numbers and assign them their own order.

The most important thing to understand about this disorder is that it’s very different from dyscalculia, although their names are similar. Dyscalculia is a development and learning problem that requires different intervention strategies. Neuropsychologists are qualified to diagnose this condition by performing a variety of tests on the patient. The tests involve mental arithmetic, written math, and successive operations. They also test patients’ interpretations of mathematical symbols and lining up numbers in columns.

Treatment for primary acalculia will depend on the type and seriousness of the injury. No one can recover lost nerve tissue, so rehabilitation tends to focus on teaching new strategies based on neuroplasticity.

Lastly, although the patient will never fully recover, treatment can provide tools that help them adapt to their new situation. Treatment for secondary acalculia, on the other hand, varies based on the associated disorder. The good news is that new technology is providing information and applications to help patients with this complex condition.

How to Support Good Emotional Health in Children with Learning Disabilities
We're constantly learning new things about learning disabilities in children. The more society has advanced, the clearer it has become that we need to adapt content and teaching styles. Read more »
Link copied!
Interesting Articles
Brain
Impulsive Aggression: a Neurobiological Explanation

Aggression is a complex and heterogeneous construct. There are basically two types of aggression: premeditated (predatory instrumental) and impulsive (affective…